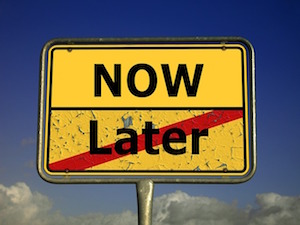 Like a lot of Americans who work in clean energy, I worried coming into the election about what a Trump presidency might mean for our industry and all of the public benefits it provides.

Candidate Trump, after all, railed at rallies that renewable energy “is not working so good.” He complained about solar’s payback time. Of wind power, which now supplies about 5 percent of the country’s electricity, employs 88,000, including more than 21,000 in manufacturing, and, in a growing number of places, is the least expensive form of new generating capacity available, he said, “the wind kills all your birds. All your birds, killed.”

Now that the election’s come and gone, I can’t say I’ve learned to stop worrying and love the bomb. But I can tell you I think Donald Trump will be good for clean energy, in the short term at the very least, lighting a fire under project developers who are pretty nervous about possible changes in federal policy and incentives. That’s the case even though two key drivers of clean energy deployment, the federal solar investment tax credit and the production tax credit for wind power, have strong, bipartisan support, and will sunset over the next several years, and are, thus, unlikely to be repealed.

The efforts of developers across the country will likely bump up the rest of the supply chain—manufacturing, distribution, and construction—faster than we first anticipated. Think: wind power before the 2014 expiration of the federal production tax credit. That amped up deployment can, in turn, help us solidify important industry trends and gains we’ve seen in recent years, including precipitous price declines, increased investment in research and new technologies, and more competition in the marketplace. All these can make clean energy more accessible to customers big and small and can make it a bigger player in the American industrial landscape. With Donald Trump’s election as an unintended catalyst, our industry can continue to create more jobs, cut more carbon pollution from our energy supply, help our kids breathe increasingly cleaner air, and lower energy costs for everyone. That’s true no matter what the president-elect has said about global warming being a hoax perpetrated by the Chinese.

We should take this opportunity and run with it.

I know we’re at an especially historic moment because of what our organization hears from the companies we work with as recruiters. “Since the election, we are operating in a policy environment for renewable energy in which the medium to long term is unclear at best,” notes Jon Rappe, senior vice president of solar developer ImMODO Energy Services. With good state and federal policies currently in place, at least for now, “we are staffing up and trying to get as many projects as possible in the ground before any new administration policies may take effect.”

It’s not just ImMODO that feels this way. One overseas solar developer expanding into the U.S. market has told us to go full throttle on hiring now. Before the election, he had a slower schedule. Another industry source, Ed Heacox, general manager of the solar inverter company CPS America, says, “We fully expect to continue to grow the USA team [of our company] to support the existing installed base as well as new customers and projects.”

Projects developers that thought they would start constructing in two to three years’ time now have timelines of one to two years. And as another solar insider, Benoy Thanjan of Reneu Energy, notes, much of “the growth in solar has been driven by state-level incentives and steep price declines in building projects. These two drivers are probably not going to stop any time soon.”

This new growth can help us mature as an industry, but it can do more than that. The American public already loves clean energy by overwhelming margins. That’s true not just of Clinton fans but Trump supporters, too. Seventy seven percent of them favor wind power and 88 percent like utility-scale solar. We should highlight the benefits we bring to the nation, like solar job growth that’s averaged more than 20 percent a year over the last six years in an industry that offers high school grads middle-class incomes, rather than the minimum wage jobs, in fields such as fast food, retail, and home health, that are often their only other alternatives.

We should talk up the more than 500 wind power component manufacturers we have in 43 states. These next few years are the time we should use to press our advantages with policy makers in Washington. They have an enormous impact on our industry’s growth and our ability to deliver the public benefits of clean energy that make us so proud.

Donald Trump’s electoral college victory is not something many of us in the clean energy community thought would benefit our industry and the country and planet it serves. But we can use the next few years to do what we do best: accelerate the transition to a clean energy future.

Especially with our industry working also as advocates, the idea that a Trump presidency can put a stop to clean energy growth just might be the biggest hoax of all.