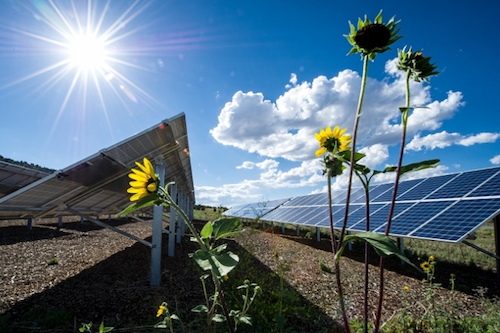 The planet is warming, dangerously so, and burning more coal will make it worse. President-elect Donald Trump thinks man-made climate change is a hoax, and he’s promised to revive the U.S. coal industry by cutting regulation. So renewables are dead in the water, right? Maybe not.

President Trump can’t tell producers which power generation technologies to buy. That decision will come down to cost in the end. Right now coal’s losing that battle, while renewables are gaining.

Trump will doubtless try to undermine the Environmental Protection Agency’s Clean Power Plan (CPP), which obliges states to cut fossil power carbon emissions. That would probably keep more coal plants open for longer. But, try as he might, Trump can’t will the coal industry back to health. It will still struggle to compete with cheap natural gas, as Gadfly colleague Liam Denning explained here.

Even without the CPP, about 60 gigawatts of coal-fired generating capacity will probably be retired by 2030. On the same basis, renewable capacity would still be expected to grow more than 4 percent a year until 2040, according to the U.S. Energy Information Administration, meaning they’d have a 23 percent share of generation.

Can’t Keep Them Down

Even without the Clean Power Plan, renewables will continue to gain.

The chart below outlines various scenarios for capacity additions and retirements. The ones to focus on are the “Reference Case” on the left and “No CPP Case” on the right. Without CPP, it shows slower growth for renewables, but no renaissance for coal. 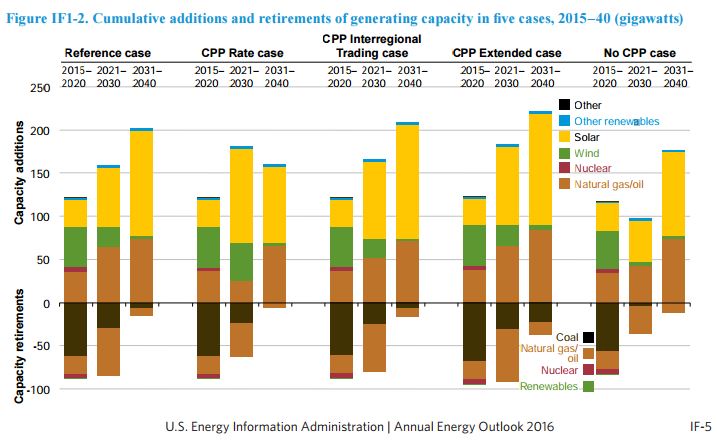 Last December, U.S. lawmakers renewed tax credits for wind and solar for another five years. The measure had bi-partisan support and it would be hard for Trump to try to repeal it. States such as California are also free to continue offering incentives for renewable energy, as before.

Even without tax breaks, renewables will probably win out on cost grounds ultimately. Equipment costs are falling and, once installed, producers don’t have to pay to harness the wind or the sun.

Onshore wind is already cost-competitive with natural gas in the U.S. and solar costs are falling rapidly. The chart below shows the levelized cost of electricity (LCOE) for various generating technologies entering service in 2022, taking into account capital, fuel, financing, maintenance and other costs. It’s subject to a lot of assumptions, but you’ll get the general idea.

Wind is already cost competitive with natural gas in the U.S.

Global efforts to halt climate change will suffer from a Trump White House and U.S. carbon emissions are likely to stay higher for longer. In no way is that good. But he can’t change energy economics.