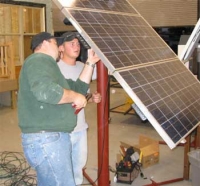 Peterborough, New Hampshire [RenewableEnergyAccess.com] From coast to coast, industry experts are forecasting that 2006 and 2007 will be the “tipping point” for renewable energy in the U.S. But when the market tips — and demand for renewables in the public sector explodes — will companies be equipped with enough technicians trained in the art of solar installation and wind turbine maintenance to keep up?

While job opportunities in areas like photovoltaics (PV) are still somewhat limited — especially outside of states such as California, New York and New Jersey — interest in the profession at the undergraduate level is growing, according to Jane Weissmann, executive director at Interstate Renewable Energy Council (IREC), the North American Licensee for the ISPQ Standard for Accreditation & Certification of renewable energy training programs. Across the country an increasing number of universities, community colleges and technical institutes have slowly begun to integrate renewable energy courses into their existing curriculums, said Weissman. The programs range from associate degree programs at institutions like Lane Community College in Oregon, which offers a two-year applied Renewable Energy Technician Option, to semester-long and online training courses. “Austin Community College last year offered a semester-long course on photovoltaic and wanted to keep it to between 15 and 20 students. The course filled up before it was even advertised. They added another course but there was still a waiting list,” said Weissman, noting IREC has also seen a lot of interest from certified tradesmen and women wanting to add to their existing skill sets. “If someone has a small plumbing company and wants to get into solar thermal for example, they need to be trained. It’s a good way to grow an existing business,” Weismann added. In an effort to help administrators and educators establish quality training programs, IREC is hosting The Renewable Energy and Energy Efficiency Workforce Education in Troy, New York. The three-day event, being held November 8-10, will give educational providers a chance to explore effective approaches for teaching workforce skills in the renewable trade industry. Sessions on how to establish effective partnerships with business, industry and government agencies will also be offered. “We have some model programs around the country. That’s what we’re going to feature at this conference so others can learn from both credited and non-credited programs,” said Weissmann. One example of a model program might be the Electrical Training Institute (ETI) of Southern California, which offers photovoltaic training in the fifth year of its apprenticeship program. Partnered with the Los Angeles County Chapter of the National Electrical Contractors Association (NECA) and the International Brotherhood of Electrical Workers (IBEW) Local Union 11, the program provides everything from the basics of distributed generation to skill improvement classes for union electrical workers. “As a Joint Training Program, our board is half contractors and half union. The contractors bring real work needs into the training mix and all our instructors are journey level, working in the field installing or at foreman and general foreman levels. Additionally, we provide updating classes for our instructors as needed,” said Jane Templin, Outreach Director at the ETI. “We are very fortunate in Los Angeles with an aggressive learning membership. Our journeymen and women take advantage of skill improvement classes and our classes are usually full.” Templin attributes a large portion of the program’s success to California’s current rebate program and the state’s desert-like conditions — both of which have created a thriving solar market. However, even with these optimum conditions, the PV program at ETI is still very much in its infancy with courses constantly in flux because of advances in technology. “It’s still a developing and changing industry with new processes and new technologies being added almost daily. We’re covering as many aspects as we can. We’re doing the work, were doing the installations … 80 percent of training is on the job and the rest is supplemented with theory and materials,” added Templin. Ultimately, in states that have expanded markets and established incentive programs like California and New York, there will be more of a need for training programs, said Weissman. The State of New York has taken a leadership role in renewable energy training programs, said Weissman, due in large part to funding and support from the New York State Energy Research & Development Authority. “The renewable energy market is not going to grow if there’s not a corresponding, sustainable workforce,” said Weissman, adding that IREC is hoping other states will follow New York’s lead in helping fund high school, college and university renewable energy programs.