WASHINGTON, D.C. — If we want wind to continue growing, more turbines will need to be placed in our communities and close to our backyards. And that will inevitably cause more social friction.

Wind supporters cannot discount concerns from local residents about noise and visual impact. With proper communication between developers and communities, many of the potential conflicts can be mitigated or avoided.

But there’s a huge difference between concerns of neighbors to wind projects and the faux medical conditions pushed by advocates who claim turbines are a serious threat to human health.

Although no conclusive research has shown that wind farms cause health problems, many anti-wind groups have pushed the idea that “Wind Turbine Syndrome” is a widespread problem – elevating legitimate siting concerns to scare tactics.

A new study released this week by the Massachusetts Department of Environmental Protection finds that “there is no evidence for a set of health effects…that could be characterized as ‘Wind Turbine Syndrome.’” The supposed health impacts pushed by wind opponents include mental health problems, heart disease and vertigo.

The Department’s Panel was comprised of independent experts in a range of fields associated with the possible health impact of exposure to wind turbines. They explored scientific literature, reports, popular media and public comments and concluded that there was no scientific basis for claims about Wind Turbine Syndrome: 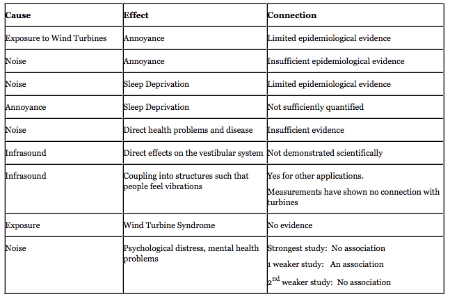 While the panel recommended more research on the impact of “very loud turbines” that could disrupt sleep patterns of some individuals (even though they write that a “‘very quiet wind turbine’ would not likely disrupt even ‘the lightest of sleepers’ at that same distance”), the researchers debunk the broad-based claims about Wind Turbine Syndrome:

The study failed to produce any concrete evidence that “flicker” caused by the shadows of rotating blades causes epileptic seizure, or that turbines cause “pain and stiffness, diabetes, high blood pressure, tinnitus, hearing impairment, cardiovascular disease, [or] headache/migraine.”

The researchers concluded that the most dangerous problem in Massachusetts was from falling ice.

Zachary Rybarczyk is an intern on the energy team at the Center for American Progress. Stephen Lacey is a writer with Climate Progress.

This story was originally published on Climate Progress and was republished with permission.