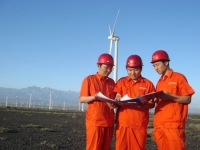 With demand for power down, natural gas prices low and project financing still tight, it’s no surprise that the U.S. wind market declined in 2010. The official numbers aren’t out yet, but it looks like 5 gigawatts (GW) were installed in the country last year. That’s half of what was installed in 2009.

Globally, however, the wind industry grew – kept strong by a booming Chinese market that put around 16 GW of installed capacity in the ground. According to the secretary general of the Chinese Wind Energy Association, the country will surpass 40 GW of total installed capacity, edging out the U.S., which has lead the world in capacity and generation since 2008. (Industry experts expect the American market will be just shy of 40 GW).

“The center of the wind universe is moving from North America and Europe to Asia,” says Steve Sawyer, secretary general of the Global Wind Energy Council (GWEC).

China now has three companies in the list of top 10 global manufacturers and five in the top 15, says Sawyer. However, those companies are mostly doing business in China, not in Europe or the U.S. Once demand cools down in China, onlookers expect the country to become a large exporter of wind technologies like it has for solar PV.

While some Chinese companies will eventually be big players on the international stage, they will have challenges to overcome. Many manufacturers are still very new; it will take time to prove they can compete with the quality of established heavyweights.

There are also cultural and political barriers. In December, President Obama issued a complaint to the World Trade Organization about specific subsidies China was giving to wind companies, arguing that they violated international trade rules. And recent political backlash over a planned 615-MW project in Texas that would be financed by a Chinese company and use Chinese turbines further illustrates the concerns people have about swapping energy dependency on the Middle East for dependency on China.

The trend is clear, however: China’s thirst for energy and promotion of renewables will make it a dominant wind player. According to a recent piece of analysis from Bloomberg New Energy Finance, China’s investment in clean energy reached $51 billion in 2010, far surpassing other leading countries.

GWEC estimates that 40 GW of wind were developed in 2010, bringing global capacity to around 200 GW. China was not the only factor in this growth, of course. Europe’s wind industry maintained momentum, putting about 10 GW online. And countries like India, Brazil, Mexico and Argentina are quickly becoming important factors. With such a diverse industry, GWEC’s Sawyer believes that global installed capacity will double to 400 GW by 2014 and reach 1,000 GW by 2020.

After India works out the kinks in its performance-based incentive program passed in 2010, industry experts think the market will grow at a steady clip. D.V. Giri, chairman of the Indian Wind Turbine Manufacturer’s Association, thinks that the Indians could be installing 5 GW of wind per year by 2015. Below, he talks to Jackie Jones about the early problems with the country’s incentive program and, when resolved, the type of investment it will encourage.

Although Asia is emerging as a dominant force in wind, the Europeans are pushing back with an aggressive focus on offshore wind. In 2010, 10 European Ministers from countries bordering the North Sea signed an agreement that could bring a multi-national grid designed to connect dozens of offshore wind plants. There are more of them popping up each year: Companies installed 883 MW of offshore projects throughout Europe in 2010. By 2020, the region could be see up to 40 GW of offshore projects, according to the European Wind Energy Association.

Below, Jackie Jones talks with Christina Aabo of DONG Energy about myriad technical issues associated with building out offshore projects. As the projects get bigger and more technically complicated, says Aabo, companies need to work very closely with equipment suppliers every step of the way, from the design to installation phases.

Although China is now the world leader in installed capacity, it is not the leader in experience. Competitive pricing from companies based in China will surely put pressure on many of the incumbents. But the technical experience of American and European companies will definitely make the competition equally matched.

Below, Jan van Egmond, director of Quality in Wind, describes the importance of ensuring quality products throughout the manufacturing and project development value chain.