More
Home Blogs The New Energy Jobs that Can Be

It is ironic that the New Energies have been labeled by some as ideas of the intellectual left because they are really blue collar industries. It is factories that turn out solar panels and wind turbines. People in boots install solar systems and build wind projects.

Wind project building and solar array installation is, of course, local work. The manufacturing, however, can be and, right now, is done elsewhere. In 2009, 70% of U.S. New Energy and Energy Efficiency hardware was imported. But domestically manufactured New Energy parts and assembly can be cheaper – even when they are made by workers earning high wages and good benefits – than the same parts expensively shipped from distant places where labor costs are lower. And domestic manufacturing will become an even better deal as the price of transportation fuel rises.

Winning the Race: How America Can Lead the Global Clean Energy Economy, from the Apollo Alliance and Good Jobs First, explains how the U.S. can have those good jobs if it will pay the policy price of getting them.

One of the biggest beneficial side-effects to building a domestic New Energy manufacturing base is that it stops the subsidizing of developing-world sweatshops where workers are underpaid so the New Energy parts they manufacture will be cost-competitive after shipping.

A wind turbine has 8,000+ components. That’s a lot of jobs. They can be in places like Arkansas and Idaho or in Shenzhen, China, and Kalim, Malaysia. By making the right policy choices, the nation can create ~100,000 New Energy manufacturing jobs by 2015 and ~250,000 by 2030. With 17 unemployed people for every job opening in durable goods manufacturing (as opposed to the national average of 6 unemployed people per job opening), letting those manufacturing jobs go abroad is not something the U.S. can afford to let happen. ::continue:: 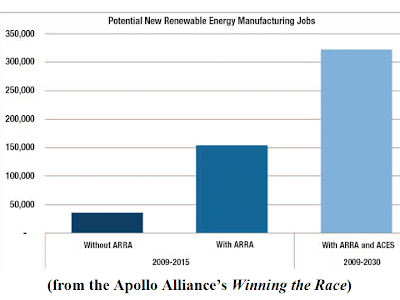 Most urgently, Congress is about to focus on energy and climate legislation. Washington insiders say the best Congress can do this year is an energy-only bill with a Renewable Electricity Standard (RES) requiring the nation’s regulated utilities to obtain 10% of their power from New Energy sources by 2012 and 20%-to-25% by 2020 or 2025.

An RES is important and will be valuable in bringing investment to the New Energies and driving the creation of New Energy jobs. But research suggests a cap on emissions will do even more of those things and will at the same time act on the greenhouse gas emissions (GhGs) that are worsening global climate change. A comprehensive long-term energy strategy will do even more.

As an example of what support for domestic manufacturing means, the study chronicles the returns from the Advanced Energy Manufacturing Tax Credits (48C credits) in the 2009 Recovery Act. Of 90 U.S.-based and foreign companies that got $458 million in 48C tax credits for U.S. New Energy manufacturing facilities, 23 are also investing in China, India, Mexico and Malaysia. President Obama wants $5 billion more to extend the 48C program. If Congress approves, those companies will continue building U.S. facilities; if it doesn’t, those facilities and their jobs will go away.

Winning the Race offers a strategy for expanding the New Energy manufacturing base and reaping the investments and jobs benefits. The strategy begins with an RES and action on GhGs that will create a long-term market for New Energy. The next step is getting that $5 billion for the 48C tax credit program. After that comes passage of an array of proposals that support needed new transmission and the retooling and expanding of small and mid-sized manufacturers. The final part of the plan is creating a workforce trained and ready to make, build and install the urgently-needed New Energy infrastructure.

For anybody who questions whether the nation can afford such investments in New Energy, consider this: China is investing ~$12.6 million HOURLY.

The nation is at a crossroads.. It can turn toward the New Energy economy described in this report and prosper or it can fail itself and flounder. 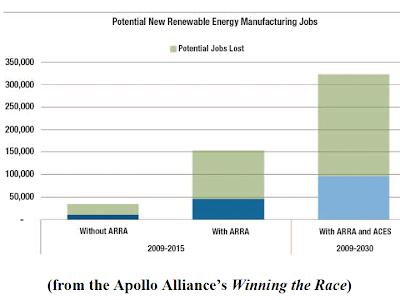 This post is based on on Report: U.S. Must Do More to Prevent Loss of Clean Energy Manufacturing Jobs by Sam Haswell (March 4, 2010, Apollo News Service)