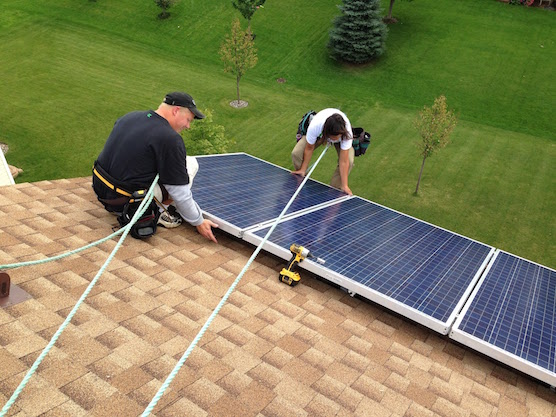 Editor’s Note: This is the first in a series of articles focusing on Minnesota’s solar market. Other articles can be accessed here.

My curiosity was piqued last summer when I received an email from a Minnesota friend, who had a community solar question.  “A solar company is trying to sell my mom part of a ‘solar garden.’ Is it a scam?”  A week later, a different friend asked the same question and I started to wonder what was going on.  When Minnesota grandmothers start to ask about solar, I knew something was up.  I packed my bags and headed to the Twin Cities to find out how the solar landscape was changing in the Midwest, interviewing nine experts across the utility, solar, environmental, and government landscape in the process.* 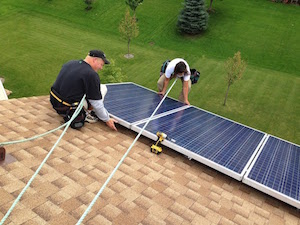 Minnesota is an unlikely testbed for solar policies.  Wind energy has been the renewable energy king for a decade, currently producing 20 percent of the state’s electricity, and setting price expectations for other renewable energy technologies.  A long-held refrain, even among state environmental advocates, was that solar was too expensive to push for new state policies.  Unlike California or Hawaii, Minnesota’s solar market was relatively small at 11 MW and there were no pressing urgencies driving change.  Perhaps surprisingly, the solar resource wasn’t the barrier you might expect (see side box below).

However, the drop in solar prices, combined with a Democratic political alignment after the 2012 election, resulted in wide-ranging solar legislation passing in 2013.  Targeted at investor-owned utilities (municipal and cooperative utilities were unaffected), the package was comprehensive and included:

If the legislation seems broad, it was.  Seeing that Minnesota had solid energy efficiency and wind policies in place, policymakers approved a range of approaches to expand existing program and test the waters with others.  The policies echoed wind energy legislation from the 1990s that jump-started the now 3,200 MW industry in Minnesota.  According to Mike Bull, the director of policy and communications at the Center for Energy and the Environment (who has also worked for a Minnesota utility, non-profit, and several government positions) the question among stakeholders was, “What’s the policy that would work for solar here? There was this broad scatter shot, a flooding the zone approach, that legislative session…and surprisingly it all passed. Then we had to work through it.” 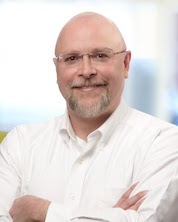 Initial estimates for the solar energy standard were that it would increase the state’s solar by over 450 MW.  No estimates were made for the other consumer oriented policies, like net metering and community solar.  Now three years later, there is a mix of progress across the new policies and programs.

Utilities have signed several large contracts to meet the solar energy mandate as expected and without much fanfare.  The rooftop consumer market has doubled to about 25 MW, as a result of larger commercial systems and the state incentive program.  However the incentive program provides both high incentives, which creates a waiting list, and varies by solar panel manufacturer based on their costs.  Additionally, there have supply constraints and at least one manufacturer had quality control issues with the panels.

There is also a finalized value of solar rate, but no utilities are expected to implement it because of the high buyback price that was set.  The biggest market potential is with community solar, which has almost 1,000 MW in the community solar project queue.  Even if only a portion of that is built, it would represent a bigger market than the solar mandate.  However, the regulatory process took a long time to resolve, and even today there are only two operating projects.  The rest are working through an interconnection process with Xcel Energy and signing up subscribers.

Was the legislation successful?  Everyone would agree that it jump-started the solar markets, although the eventual scale of community solar projects is a big unknown.  Amidst all the news about California-solar this and Hawaii-solar that, it’s easy to forget that the majority of U.S. states are in a similar position to where Minnesota was three years ago — that is, not much solar.  Asked about giving advice to other states, Bull summed it up by saying, “I think a scatter shot approach is a good way to go. Try a few different things, but perhaps in smaller ways to see what works, and then do more of the stuff that works later, to make sure risk is limited.”

Parts two and three of the Minnesota series will compare community solar and the value of solar programs.  What worked and what didn’t?

Is Minnesota a good place for solar?

Minnesota is snowy in the winter and humid in the summer.  When working in Minnesota, I always ‘shocked’ people by saying that Minnesota’s solar resource was as good as Houston’s, a statement I still hear being used today.  A quick comparison of major cities across the U.S. shows Minneapolis as a solid middle solar market compared to other cities. 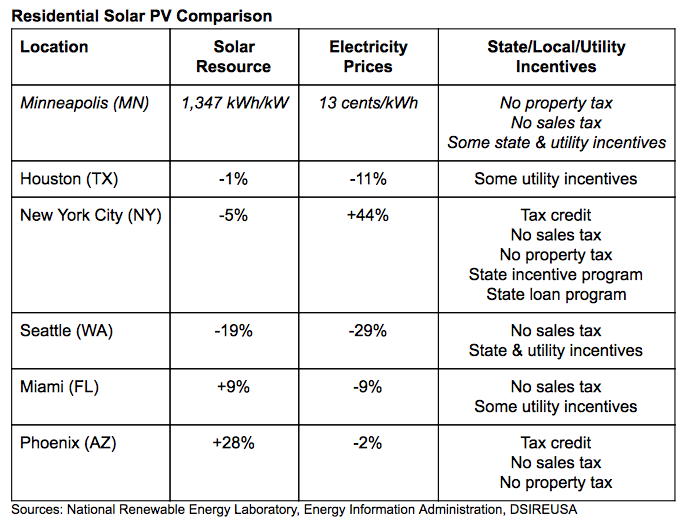 Electricity prices and local and state incentives can more than make up for solar resource differences.  For example, New York City is cloudier than Minneapolis, but pays more for electricity and has stronger solar policies, making it a better economic value for consumers.  The overall effect likely pushes Minneapolis ahead of Miami in terms of net value, but behind Arizona and New York.  A variety of online calculators are available to analyze your specifics.

Feeding into this series are in-person interviews with nine Minnesota energy experts across a spectrum of organizations, which included:

Note: The author worked at the Minnesota Department of Commerce from 1999-2006.