The New Energy industries are using this period of economic hesitation to study carefully the impacts of the various federal incentives that were in place before the dissipation of credit as well as those that have been put in place to compensate for the subsequent absence of credit. The intention is to not only come out of the recession ready to compete but to come out of it with a better understanding of which incentives will make them MORE competitive in this century’s budding New Energy economy.

As WHO BUYS SUN AND WHY detailed last week, the solar energy industry is nearing an inflection point in its growth where it must begin appealing to a bigger segment of the public. The careful look it is taking at its rebates, performance based, and financing incentives is giving solar professionals the opportunity to better understand what will create that bigger cohort of buyers.

The federal incentives that have throughout this century had the most important impact on the New Energy industries have been tax credits. In late 2008 and early 2009, as the economy crumbled, credit froze and banks teetered on the brink of failure, astute leaders in New Energy quickly saw tax equity would lose its appeal. They successfully steered a sympathetic Obama administration to a set of variations on tax credits. 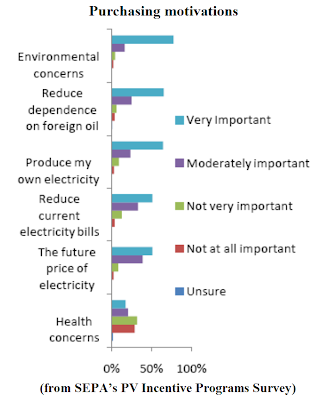 The solar industry is trying to figure out what kind of incentives will get more people to buy rooftop systems. (click to enlarge)

Those variations have now been in place long enough for researchers at the U.S. Department of Energy’s laboratories to analyze impacts. The conclusion: The kind of federal incentive that best serves New Energy depends on the size of the New Energy project and where it is.

Until the October 2008 financial rescue, there were 2 primary tax credits. With the Production Tax Credit (PTC), a project earned a tax discount for every unit of energy the project produced. With the Investment Tax Credit (ITC), a system purchaser got a percentage of the cost of the system discounted from federal taxes.

There were 2 variations on these tax credits put in place in response to the economic collapse of late 2008 were: (1) The option to take the ITC with 3 important improvements, (a) it was put in place for a longer period of time (8 years), (b) it was provided to more kinds of New Energy and (c) it covered 30% of the full value of the project instead of only the first part of the project’s cost; or (2) The option to take an upfront cash grant for the value of a part (30%) of the project’s cost. 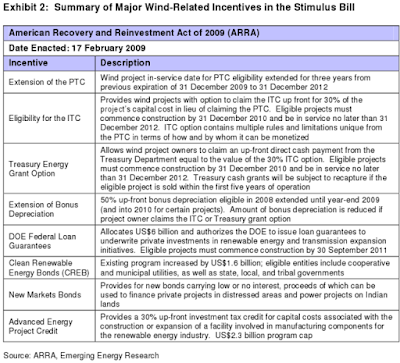 For wind, the choices are complicated. (click to enlarge)

As the authors of Best Among Equals? Choosing Tax Incentives for Wind Projects demonstrate, for big wind projects that promise to produce big quantities of electricity, the PTC is still the best choice, though in a capital-constrained economy it may not be an available choice.

For small wind systems, usually purchased by homeowners and small business owners, the ITC is a more preferable option because it is like a discount on the price.

For medium-sized wind projects – termed community wind because they are small enough to be largely locally owned but big enough for their output to be described as utility-scale – the best incentive, as Mark Bolinger demonstrates in Revealing the Hidden Value that the Federal Investment Tax Credit and Treasury Cash Grant Provide To Community Wind Projects, is probably the cash grant, with a set of ancillary benefits like relief from the alternative minimum tax and passive credit limitations. 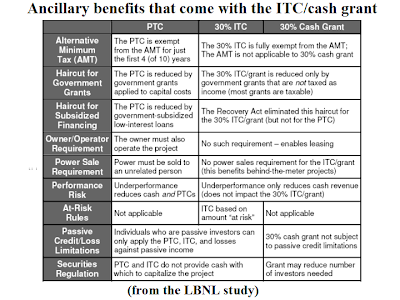