Former Secretary of Defense Donald Rumsfeld famously ridiculed the nations of the European Union as “old Europe” but they are way ahead of the rest of the world when it comes to New Energy.

While U.S. offshore wind developers are still trapped in regulatory hell, wind power builders in Europe (and, to a lesser extent, in China) have begun installing turbines in coastal waters and turning into electricity the winds over the ocean that are, as anybody who has been to the beach or on the sea can attest, stronger and steadier than those onshore.

Although lagging behind, U.S. offshore wind builders are studying their assets. As Maryland’s Offshore Wind Power Potential makes clear by its detailed examination of one state’s calculated capacity, those untapped assets are immense. ::continue:: 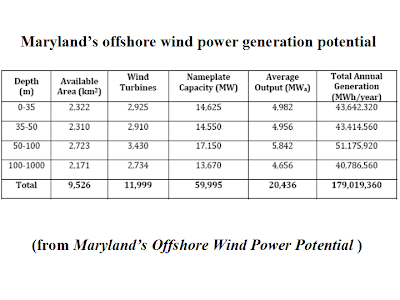 This preliminary assessment of the social, ecological, and economic feasibility of developing Maryland’s offshore wind power concluded that just the state’s near-coast winds – and not even including the winds in the Chesapeake Bay – could supply two-thirds of its electricity, working only with turbine technology already in use.

Three-fourths of Maryland’s presently harvestable near-shore wind is enough to supply the 3,900 megawatts of wind energy the state’s Renewable Electricity Standard allows (18%) toward meeting its total 2022 (22.5%) requirement for electricity from New Energy sources.

With deeper water offshore wind technologies now being tested, the state’s ocean wind could supply almost twice the electricity (179%) it consumes, which means it could sell to other states enough wind-generated electricity to pay for four-fifths of what it uses. 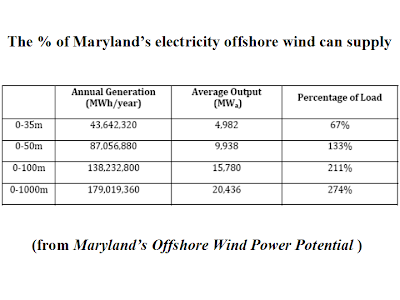