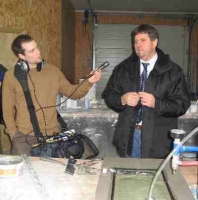 Every once in a while visitors might even see a person hanging from the protruding tower (left), emerging through a hatch at the top and descending with ropes below the roof line of the surrounding buildings.

Some foreign tourists might not recognize the structure. But the locals — and probably most Germans  — know it as an unfinished wind turbine.

On any given day, there’s a good chance that Nils Peters (lead image) will be hanging around the turbine, supervising workers climbing up or rappelling down the 66-meter tower. As managing director of BZEE, a training school for wind technicians, he is responsible for making sure his students can handle the stress of working in tight, high spaces.

On this cold December evening, Peters stands inside the tower looking up at a platform roughly 60 meters above his head.

“Before anyone enters the BZEE program, we bring them to a large wind turbine and send them up,” he says playfully. “We’ll know very quickly if they will be able to do the job when they’re forced to work that high above the ground.”

After sending the prospective students up a turbine and explaining the tasks they must do 50 – 100 meters above the earth, instructors immediately interview the candidates. A large portion of them are comfortable, but many come down a bit spooked; and their true feelings show directly after the experience, says Peters.

“That is the best time to interview someone,” he says with a big smile, as if thinking about the face of a scared student. “They have no place to hide their emotions. If they want to be a wind technician, they need to be tested to see how they deal with the environment.”

Welcome to BZEE, one of the world’s most prominent training centers for wind technicians. Every six months, 15 students from technical colleges around Germany come to Husum for a set of intensive courses that give them the skills necessary to engage the front lines of the renewable energy revolution.

These technicians will work throughout Europe, helping keep the turbines spinning in nearby countries like France and the UK. Most importantly, they will be responsible for maintaining the world’s largest fleet of turbines right in their own country.

Germany today has about 23,300 MW of installed wind capacity — the most of any country. If all goes according to plan, Germany will install about 32,000 MW more onshore and offshore capacity over the next 11 years. It’s going to take a lot of technicians to service those turbines.

Peters estimates that Germany needs about 600 additional service technicians today. Adding the 22,000 MW of onshore and 10,000 MW of installed offshore capacity that is projected by the German Wind Energy Association through 2020 means that there could be a serious shortage of workers to keep a wind-heavy electricity mix reliable and profitable.

“If we look at the growing demand for wind in Germany and around the world, we will face an even greater shortfall of service technicians if we don’t focus on training them today. These jobs are becoming more and more important,” says Peters.

These skilled workers are important not just because they’ll help keep the lights on; they will ensure that Germany retains its role as a technical leader in renewable energy.

Trainers from all over the world come to BZEE to learn from the German experience and bring that knowledge back to their home countries. Jerry White (image, left, with black coat), a former tractor mechanic from the UK, is one of them.

“A lot of what the Germans have learned can be very useful in our country,” White says, surveying a nearby classroom filled with students being taught how to fix a composite blade. “The UK is perhaps where Germany was in the 90’s.”

With about 3,174 MW of installed capacity today, it will be some time before the UK catches up with Germany. In 2007, the UK government set a target of installing 33,000 MW of offshore capacity by 2020. That target may be difficult to reach due to materials constraints and issues with financing, but the installation of even half that amount will require a large increase in technicians to keep the technically-complex offshore machines running smoothly.

Right now, if an onshore or offshore turbine has a problem in the UK, a technician from Germany or Denmark usually has to be called in to fix it. These workers deal with constant travel, complicated problems and high stress levels in the field — an important skill that technicians in the UK must learn from the Germans and others who have the historical experience.

“We have to learn not only how to fix the machines, but how to deal with the entire process…the technician who works on a turbine has to be a particular kind of animal,” says White.

Instructors like White will train those “animals” to make smart, safe choices when working on turbines. It’s not just about learning the electrical or mechanical skills — it’s about getting used to working long hours in cramped, high-up places that are often far away from home, he says.

That job description may not sound particularly appealing. But that hasn’t slowed the surge in demand for training programs like BZEE’s. This year the global wind industry passed the 100 GW capacity mark. If growth rates continue as expected, there could be as much as 500 GW of wind capacity installed around the world by 2020. That’s a lot of secure, high paying jobs.

Andy Dibling (image, right, in hat), an instructor from Canada’s Prince Edward Island (PEI), knows how important those jobs are for local economies. Walking around the BZEE campus with his fellow trainers, Dibling stresses the importance of wind for his province’s health.

PEI is built on farming, fishing and tourism — all industries that have taken a big hit as the financial crisis has rippled through the global economy. An aggressive focus on wind energy could reverse some of the economic problems the province has faced, says Dibling.

“We need these jobs. We have the ability to make wind an economic driver within the province and also to use it as an export resource,” he says.

PEI currently has 50 MW of installed wind capacity. The province is looking to install 500 MW by 2013. With a peak demand of only 220 MW, that additional capacity will allow the island to export electricity to states in the northeast U.S. That could mean CAN $40 million [US $33.3 million] in economic activity over the next 25 years.

“We definitely have a shortage of skilled workers” to achieve those goals, says Dibling. “So we’re looking to fill some of that need. That’s why this program is so important.”

In a couple weeks these trainers will take what they’ve learned in Germany back to their home countries and help build the workforce of the future. Indeed, the sustainability of the wind industry — and thus, broader economic growth — depends on their work.

Nils Peters closes the hatch of the training turbine and walks over to his fellow instructors gathered at the foot of the tower.

“Without these technicians, there wouldn’t be a wind industry,” he says, looking over at White and Dibling. “We’ve already done a lot with wind here in Germany. Now we are trying to spread some of that knowledge to others so that they can do the same.”

In December 2008, as part of a trip organized by Inwent, RenewableEnergyWorld.com Podcast Editor and Staff Writer Stephen Lacey, traveled through Germany and met with the country’s political leaders and renewable energy industry executives. This is the third installment of his three-part series on renewable energy and climate change from the German perspective.

For an audio program exploring the German perspective on the industry, listen to the December 21st edition of the Inside Renewable Energy podcast. This podcast is a great opportunity to hear from the experts in a fun and engaging way!