Cannon Power Group, a San Diego wind energy developer, closed a $178 million financing deal with Siemens Financial Services in October, allowing it to expand an existing wind generation project in southern Washington State. The Siemens arrangement is only part of the story, however. Cannon combined a government grant with a pre-pay agreement involving a public power authority to complete the financing. The structure is novel and well suited to the current financial climate. 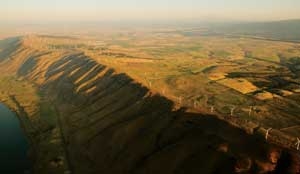 Cannon plans to use proceeds to pay down previous project debt with HSH Nordbank and build another 60 MW of capacity using 26 turbines. The addition will bring total installed capacity at Windy Point/Windy Flats to 262 MW. The expansion is expected to be completed by the end of this year.  (Photo credit and caption information at bottom of page.)

Cannon structured the financing with the Siemens financial group based on a “pre-pay” power purchase agreement (PPA) structure combined with federal stimulus money. The Act allows developers to apply for a grant for up to 30 percent of a project’s eligible costs.

“Windy Flats is one of the most significant pre-pay power purchase agreement transactions concluded this year,” said Tom Trimble, partner at Hunton & Williams LLP, which represented Cannon in negotiations with the Southern California Public Power Authority. The power authority is buying all of the output from the expansion. “With the addition of 60 MW at Windy Flats, that brings the total megawatts of the combined projects to 400 MW, which is a tremendous achievement in only 18 months and in spite of the current financing environment.”

Had federal stimulus money not been available, the project likely would have been postponed until tax equity markets recovered, said Gary Hardke, president and managing director of Cannon Power Group.

Windy Point/Windy Flats is spread along 26 miles of ridgeline above the Columbia River in Klickitat County, Wash. Most of the turbines are Siemens 2.3 MW machines. The site has transmission access rights for up to 500 MW at the Rock Creek substation. Cannon contributed $14 million toward substation construction costs. It also built a 20-mile-long, 230kV transmission line as well as 40 miles of roads.

Hardke said finding a construction lender in the current financial climate was a challenge. A handful of lenders aside from Siemens showed interest in the project, but their terms proved “expensive and restrictive,” Hardke said. “It’s a very difficult climate.”

At present, the most expensive ways to finance a project are through corporate equity, private equity or bank debt, said Trimble. Tax equity investors can reduce the cost, but the number of such investors fell sharply with the financial crisis. Their role has been only partially replaced by government grants. A still lower-cost option is to secure prepayment from an off-taker that also has access to a low-cost source of funds, he said. That was the option Cannon Power Group elected to pursue last spring, shortly after Congress passed the American Recovery and Reinvestment Act.

In the case of Windy Flats, Southern California Public Power Authority was the off-taker, agreeing to a 20-year PPA. The Authority is made up of 10 municipal utilities and one irrigation district whose members deliver electricity to around 2 million customers over an area of 7,000 square miles. Members include municipal utilities in Anaheim, Azusa, Banning, Burbank, Cerritos, Colton, Glendale, Los Angeles, Pasadena, Riverside and Vernon and the Imperial Irrigation District, all in California.

Under the structure, the Authority agreed to buy (or pre-pay) a long-term block of power. In exchange, Cannon Power Group will sell 20 years’ worth of power at a “P99.” In other words, probability analysis was used to arrive at a 99 percent certainty that a given amount of power would be produced and sold over 20 years. In exchange for the pre-payment, the power authority received a price discount whose size was not disclosed.

The power authority anticipates issuing long-term, tax-exempt bonds (on the order of $500 million) to finance the pre-pay amount. And it holds a deed of trust against the project as security. That puts the Authority in a role similar to that of senior secured lender. The prepayment takes the place of term debt and the federal stimulus money takes the place of tax equity.

A risk exists that the Authority might be unable to sell the bonds, but “debt risk is there no matter what the deal,” said Michael Toke, Cannon Power’s general counsel and senior vice president. For example, in July 2008, Cannon pursued a deal with Citigroup and AIG for another portion of the wind farm. Toke thought both looked like good business partners. By comparison, Toke said “I’ll take L.A. risk any day.” (The Turlock Irrigation District ended up buying the Citigroup/AIG portion of the wind farm in 2008, raising some $400 million in a few weeks.)

Combining the pre-payment with an expected grant from the American Recovery and Reinvestment Act, Cannon Power will pay off the Siemens construction loan. Payoff is expected to occur shortly after project completion, sometime in the first quarter of 2010.

“Siemens wanted to be comfortable that they would be taken out” soon after construction ended, Hardke said. “Siemens did not contemplate term financing, just construction financing.”

The deal was complex with many “moving parts” and a structure not for the risk-averse, Toke said. It involved two lenders, the public power authority, 17 landowners, permitting agencies, the Bonneville Power Administration and law firms for almost all of the parties. “Until the last signature it was all very fluid.”

The power authority will buy any excess power under the PPA. It also has an option to buy the project after five years.