LONDON — Renewable Energy World asks leading players in the industry for their verdicts on a key question of the moment. In this edition we asked for views on European onshore wind:

Onshore wind installations in Europe have slumped behind forecasts amid a protracted economic crisis. What does this mean for the future of onshore wind in Europe? And where should it now look for growth?

Onshore wind in Europe has peaked and is currently facing slow decline. We forecast the EU-27 to install a record 9.3 GW of onshore capacity in 2012, but for the total then to decline to less than 7 GW per year in 2013 and 2014 due to policy uncertainty in several large markets and the continuing financial crisis in southern Europe.

Further growth in the longer term would come from two areas: the emerging markets in Eastern Europe and the market for repowering of old turbines. There are several new markets in Eastern Europe such as Romania, Serbia, Croatia and the Ukraine that have growing electricity demand and excellent wind resources. They are implementing new policies to encourage wind development as they retire old coal-fired power plants, seek energy independence and increase their use of renewables to match EU standards. Further north, the Baltic countries, Finland and Sweden are also promising markets that are looking to accelerate growth in order to meet their targets.

Europe is also home to some of the oldest wind projects in the world and as these turbines age further, repowering or upgrading them to modern machines makes increasing economic sense. By 2020 there will be 12.8 GW of projects more than 20 years old in Europe that will need to be repowered and a further 24.5 GW between 14 and 18 years old with potentially high enough operational costs that will make repowering attractive. Most of this repowering will start in Denmark and Germany, but reach Spain and other European markets by the end of the decade. 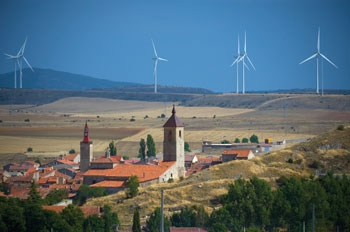 Historically, Europe has been the leading continent in wind power development both in terms of installation and as a manufacturing base for wind turbines provided in the region and internationally.

The European market has suffered severely from the debt crisis, particularly in markets such as Spain, Italy, Greece and Portugal. The continent is characterised by low growth rates for its economy and there is no sign of a fast recovery in 2013 and 2014.

On the positive side, we have seen emerging markets which took off at around the same time that the economic crisis arrived in Europe. These emerging markets include Bulgaria, Romania, Poland and Turkey, and recently we have seen an old market, Sweden, accelerate its annual installation to a significantly higher level.

The crucial question is whether the activity in these new markets will be able to balance the loss in the mature southern European markets. The five emerging markets mentioned contributed with a combined 769 MW of new wind power in 2008 when the financial crisis began. In 2011, the same five countries accounted for 2301 MW, an increase of almost 300%. These markets are still in an early phase of exploiting their huge potential and are expected to maintain momentum similar to that experienced in 2011.

Further analysis indicates that total wind installation in Europe will grow from 10.2 GW in 2011 to 18.7 GW in 2016, equal to an average annual growth rate (AAGR) of 12.9%. After eliminating the estimated offshore installations from this forecast, the result is an expected AAGR of 9.5% for land-based wind. Note that in this forecast the four southern European markets (Spain, Italy, Greece and Portugal) are kept at their recent levels with a modest recovery beyond 2015 for Portugal and Italy.

Land-based wind in Europe will continue with steady development in the short to medium term, but increasing demand in new countries will change the mix within the European market. On the supply side there will be increased competition, primarily caused by other events in the international arena (such as uncertainty in the US and lack of progress for European OEMs in China). These competitive pressures will lead to a lower cost of electricity from land-based wind, which in the end fertilises long-term growth in the European region.

Europe has long been a leader in renewable energy policy, planning and development, and the onshore wind market is no exception, with almost 100 GW installed. Europe led in onshore installations in the early stages of market development before Asia and the US stepped up large-scale development.

There was barely any growth in installations for onshore wind in 2011 compared to 2010, and this may be a trend going forward – slow but steady installations, a sign of a mature market, and wind is the most mature of all renewable technologies. The EU directive to target 20% of renewable energy by 2020 gives the market some much needed policy certainty and stability and puts a floor under the market at least until 2020.

Countries in Southern Europe, most of which are in economic turmoil that doesn’t look to improve anytime soon, accounted for almost one third of the onshore wind market last year. Subsidies tend to be one of the first expenditures to be placed on the chopping block when countries deal with debt.

It looks like this is the new normal for onshore wind in Europe, with growth remaining weak, at least for a while. Along with economic issues there are grid connectivity and land issues that come with a 100 GW wind market. The next phase of fast growth may come as the onshore wind market in Europe approaches grid parity and can compete with other sources of energy without subsidies. Policy support tends to be directed towards new and fast growing markets like offshore wind and small solar – onshore wind will have to adapt.

Overall it is a very challenging market out there for onshore wind. While you can look at some Eastern European countries like Romania, Poland, Ukraine, Latvia and others as possible markets that could pick up the slack for Europe, in the short term, market fundamentals will have to drive the next phase of growth in onshore wind for Europe.

Whisper it, but the bad news for many is that growth in European onshore wind will be limited for many years to come.

As fiscal consolidation continues and, perversely, as the cheapest form of wind energy production is hit hardest by falling subsidies, the prospect of further European expansion looks bleak.

However, look below the surface and as Eastern European countries begin to seek greater EU integration, policy for 2020 targets will drive the market forwards.

The recent expansion at the Fantanele-Cogealac Wind Farm in Romania is a case in point. Right now the site has connected over 216 turbines to the grid and is generating regular power and returns.It’s a similar story for some of the savviest of developers and operators currently working throughout Poland and Turkey too, although in all instances, regulatory and legal obstacles remain.

Nevertheless, as Eastern European markets express an increasing desire to turn their backs on the rising price of Russian gas and decreasing investment in increasingly expensive coal-fired power, for these determined countries wind remains a compelling proposition.

Here, the markets have learnt and adapted to new technologies relatively quickly and have developed a series of strong relationships with key developers and manufacturers which have in turn provided additional manufacturing resources. New technology is being tried and tested and for the likes of GE operating in Romania, Eastern Europe has for a long time been viewed as an important diversification away from its established US base.

Because of this, over the next 12 to 24 months Eastern Europe should continue to see some gentle upward momentum.

Subsidies will remain relatively small, site quality and ease of connectivity will vary greatly and the administrative challenge and local political headaches will never totally disappear. However, for European onshore wind, Poland, Romania and Turkey continue to offer the best chance of growth.

10.5 GW was the all-time European record for annual installations, achieved in 2009. Since then, due to the economic slowdown and government austerity, Europe has had slightly lower growth of 9.6 GW in 2010 and 2011. Indications are that 2012 will be similar to the last two years – around 10 GW. But 2013 is another matter and could be tougher.

Two key trends are clear for many national markets. First, a growing north/south split in western Europe, with recession and austerity slowing down many ‘traditional’ southern European markets including pioneers Spain and Portugal; and second, continued growth in some emerging markets such as Romania, but a risk of paralysis in other previously growing markets such as Bulgaria.

Crisis-hit Spain’s reduction in electricity consumption is likely to continue, resulting in less capacity investment, as well as caps on new wind capacity and the new electricity tax. The Spanish market may not pick up for a number of years. The same is true of Portugal.

Italy, due to the crisis but also the instability of its regulatory framework over the past years, is likely to suffer a slowdown in 2013. Project roll-out in 2010, 2011 and 2012 is mainly from projects given permission several years ago. Few new permits have been awarded since, and this will start to hit installations in 2013.

Greece’s wind energy industry did not feel the brunt of the crisis in 2011, but it could still come this year or next.

France too is facing a slowdown, due more to regulatory uncertainty over the feed-in tariff and over-complex permitting rules than to any financial crisis. Things could pick up in the coming years with the administrative simplification and reduction in nuclear promised by the Hollande government.

Northern Europe is much less badly hit by the crisis. The German energy transformation, driven by the decision to abandon nuclear, requires, and is delivering, onshore growth.

Some Nordic markets like Sweden and Finland are also showing solid growth to achieve their 2020 targets, as is the UK, despite investor uncertainty over energy market reform. Denmark will also have to achieve considerable growth if it is to meet its recently announced target of 50% wind by 2020. Ireland, one of the markets with the greatest wind penetration, should be buoyed by the inauguration of a 500 MW inter-connector with the UK and recent clearing of its new support scheme by the European Commission.

In emerging markets, there is a second divide opening up between likely continued growth in some markets and a failure to live up to early promise in others. One previously promising country, Bulgaria, has changed its support scheme and grid connection requirements to slow down wind energy development. Without policy changes, this market could be stopped for quite some time, while Romania, an emerging pioneer, seems to be heading for a record year in 2012.