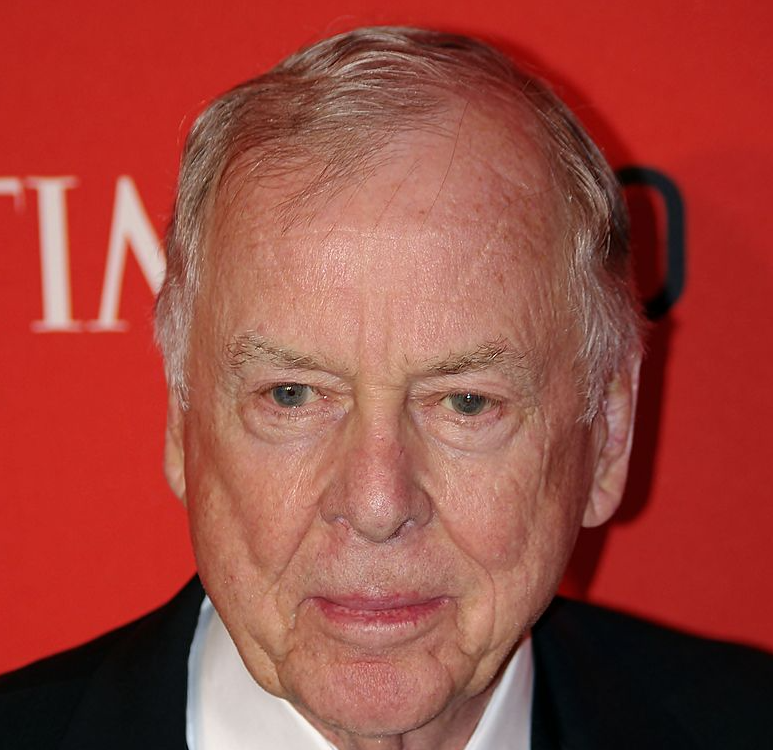 T. Boone Pickens, the onetime Texas oil wildcatter turned corporate raider who became a billionaire energy investor and television pitchman for wind and natural-gas power, has died. He was 91.

He died Wednesday of natural causes, according to spokesman Jay Rosser. Pickens’s primary residence was in Dallas. In late 2016, he posted a message on his LinkedIn page announcing he had “several strokes” and then had a “Texas-sized fall” requiring hospital treatment. He said he was still mentally strong but in declining health, adding, “I clearly am in the fourth quarter.”

In late 2017 he put his 65,000 acre (26,305 hectares) Mesa Vista Ranch in the Texas Panhandle up for sale, with an asking price of $250 million. Soon afterward Pickens closed his hedge fund, writing on his website that he wanted to invest instead in “personal passions like promoting unbridled entrepreneurship and philanthropic and political endeavors.”

Though he achieved much of his fame for takeover bids in the 1970s and 1980s, Pickens earned much of his wealth in the energy futures market after turning 75 in 2003, making billions through his Dallas-based BP Capital LLC by correctly betting on rising prices for oil and natural gas.

Forbes magazine estimated that Pickens’s net worth doubled in 2005, to $1.5 billion, and doubled again to $3 billion in 2007. The magazine’s last estimate of his wealth — $950 million, in 2013 — reflected losses from the 2008 financial crisis, the hundreds of millions Pickens spent on philanthropy (including about $500 million to Oklahoma State University, his alma mater) and his investments in wind energy, part of his plan to end U.S. dependence on Middle East oil.

From his base in Texas, Pickens and his Mesa Petroleum Co., one of the largest independent U.S. producers of oil and gas, made a splash on Wall Street in the 1980s with its attempted corporate takeovers, assisted by figures such as mergers-and-acquisitions lawyer Joseph Flom and banker Alan “Ace” Greenberg at Bear Stearns Cos.

It was, Pickens explained, “cheaper to look for oil on the floor of the New York Stock Exchange than in the ground.” His tactics earned him millions, even when he failed to gain control of the companies he chased.

A Time magazine cover story in March 1985 said Pickens “has swept up like a twister out of Amarillo, Texas, to become one of the most famous and controversial businessmen in the U.S. today.” Some oil company executives urged Congress to stop him. “He’s nothing but a pirate,” G.C. Richardson, a retired executive of Cities Service Co., one of Pickens’s targets, told Time.

Pickens made clear he had no aspirations for acceptance in the world of chief executives he derided as the “Good Ol’ Boys.”

He mocked the “excesses” of corporate America — “The biggest hurdle in American corporations is the CEO’s ego,” he wrote — and insisted his takeover bids were, at root, attempts to get shareholders the best return on their investment. He created the United Shareholders Association in 1986 to represent what he said were the interests of small investors.

Mesa’s bid for Gulf Oil Corp. in 1983 and 1984 spurred the largest corporate merger in history at the time, Standard Oil Co.’s $13.2 billion buyout of Gulf to form Chevron Corp.

As Robert Slater wrote in his 1999 book, “The Titans of Takeover,” the deal made Pickens “a hero to Wall Street” because shareholders earned an estimated $6.5 billion from the run-up of Gulf’s share price, while Merrill Lynch, Morgan Stanley and Salomon Brothers shared $63 million in fees. Pickens and his partners enjoyed a profit of $760 million.

By the mid-1990s, the tables had turned. Mesa, mired in debt, its share price falling, faced angry shareholders and an attempted hostile takeover. Pickens sold a controlling interest to Texas financier Richard Rainwater in 1996 and soon had to step aside as CEO and chairman. Down but not out, he proved himself an adept hedge-fund trader, betting correctly on price moves of natural gas and crude oil.

“I hope people think of me as a visionary who recognized it was important to show a new look periodically,” Pickens said, according to a 2018 New York Times story. “Predictability leads to failure.”

An active supporter of Republican politicians and causes, he gave $4.6 million to advocacy groups in the 2004 presidential election, including $2 million to Swift Boat Veterans for Truth, which attacked the military record of Democratic presidential nominee John Kerry, a decorated veteran of the Vietnam War.

Pickens supported Donald Trump during his successful presidential campaign in 2016 because the real estate magnate “was the only one who was going to change anything” among Republicans who ran for the nomination, Pickens said in an interview. “Now, you may not like the change you get, but you’re getting ready to have change. And I’m a change advocate.”

Pickens spent about $100 million since 2008 on his Pickens Plan, a grassroots campaign that called for building wind farms and an improved electric grid, offering incentives for energy efficiency and expanding use of natural gas-powered vehicles. That created a strange-bedfellows alliance between Pickens and Democrats.

“Here is a man who was my mortal enemy,” Senate Majority Leader Harry Reid, Democrat of Nevada, said in 2008. “He’s my pal now.”

Pickens insisted there was nothing discordant in an oilman seeking less reliance on oil. When it comes to energy, he told Newsweek, “I’m pro-everything.”

Thomas Boone Pickens Jr. was born May 22, 1928, in Holdenville, Oklahoma, a cow town near the Greater Seminole oil field, which had been discovered a year earlier.

He was called “T-Bone” by his father, also named Thomas Boone Pickens, who went by Tom. He was “Boone” to his mother, the former Grace Molonson, who ran the local Office of Price Administration, rationing gasoline and other goods. The family’s roots in England intersected with those of Daniel Boone.

Pickens said he first grew a business when he expanded his newspaper-delivery route from 28 houses to 156.

His father, a lawyer by training and an avid gambler, worked in the oil business, buying and selling drilling leases. After losing money as a wildcatter in the late 1930s, he moved the family to Amarillo, Texas, where Pickens attended high school. His high-school girlfriend, Lynn O’Brien, would in 1949 become his first wife.

He went to Texas A&M on a basketball scholarship and planned, he recalled in his 1987 memoir, to become a veterinarian. An injury ended his scholarship after his freshman year, and he transferred to Oklahoma A&M at Stillwater, where he studied geology, as his father wished.

After graduating in 1951, he worked three years for Phillips Petroleum Co. That’s where, as he later told it, he noticed waste and inefficiency that would inspire bids to force oil companies to maximize value for shareholders.

He quit Phillips in 1954 and two years later opened Petroleum Exploration Inc. Two investors put in $1,250 each for half the shares, and established a $100,000 line of credit. Pickens renamed the company Mesa Petroleum and took it public in 1964. By 1968, revenue had grown to $6.2 million with profits of $1.4 million, and by 1970, Pickens was a multimillionaire, he wrote in his 2008 memoir, “The First Billion is the Hardest: Reflections on a Life of Comebacks.”

Mesa went after companies Pickens believed were inefficient and undervalued, no matter their size.

In 1982, it targeted Tulsa, Oklahoma-based Cities Service. In a faceoff of M&A heavyweights, Pickens was advised by Flom, a founding partner of Skadden, Arps, Slate, Meagher & Flom, while Cities Service was backed by Bruce Wasserstein and lawyer Martin Lipton, at Wachtell Lipton Rosen & Katz.

In the end, Cities Service accepted a white-knight offer from Gulf Oil, which bought out Mesa’s stake for $55 a share — giving Mesa a profit of $31.5 million, according to Pickens.

Pickens began targeting Gulf, the fifth-largest U.S. oil company, in 1983, when its share price was $38. Pickens’s partnership, Gulf Investors Group, worked with Greenberg at Bear Stearns to accumulate shares. Pickens met in New York City with 200 financial analysts and money managers to assure them he was serious about a takeover and wouldn’t strike a separate deal with Gulf.

“It was pouring rain outside,” Slater wrote of the meeting, “but the crowd couldn’t stay away and miss the unusual chance to see what this man was like — this man with the strange name, with the great derring-do, this man who had sent chills running down the backs of the Wall Street community.”

In the friendly takeover that Gulf eventually agreed to, Standard Oil paid $80 a share. Pickens and his partners had paid an average of $43 per share in building their 9 percent stake.

Pickens took home another consolation prize in 1984, when Phillips — his onetime employer — fended off his takeover bid by buying back his stock, giving him a profit of $89 million.

In changing Mesa to a master limited partnership in 1985, Pickens put an emphasis on returning capital to stockholders, committing the firm to annual cash distributions of $1.50 to $2 a unit through 1990. The structure let him issue new Mesa units to finance acquisitions, such as the 1986 purchase of natural-gas company Pioneer Corp. When the price of gas dropped, those guaranteed distributions became “a killer,” Pickens later said.

Pickens found himself on the target end of a hostile takeover attempt led by former Mesa President David Batchelder. (Batchelder, co-founder of Relational Investors LLC, told the San Diego Union-Tribune that he left Mesa in 1988 because Pickens “started taking himself too seriously and lost his ability to have fun.”) After Mesa’s share price fell below $3, Pickens turned to Rainwater as a white-knight investor. Pickens was forced out of the company he had run for 40 years.

Betting correctly on rising crude oil prices, he tripled the money in that fund in the first nine months of 2004. In 2005, the fund made $1.3 billion — a 248 percent profit, after fees — on oil futures and natural-gas trades.

At the time of that interview, crude oil futures had topped $49 a barrel, the highest in the 21-year history of the contract. By July 2008, when the price peaked at about $147 a barrel, Pickens was a billionaire. Then prices plunged in the second half of 2008, a turn that cost his fund more than $1 billion in losses.

He admitted to miscalculating. “It’s my toughest run in 10 years,” Pickens said, according to the Wall Street Journal. “We missed the turn in the market. There’s nothing fun about it.”

Six years later, crude prices crashed again, creating the oil industry’s worst financial crisis in a generation. Pickens responded by ultimately selling out all of his oil holdings, choosing instead to wait for a better time to jump back in, he said in a Bloomberg TV interview in February 2016. Later that year, federal filings showed that his BP Capital Fund Advisers LLC took new stakes in a handful of the pipeline owners that ship crude to market.

Along with his investments in oil, Pickens built business plans on water, wind and natural gas. His plan for a $10 billion, 4,000-megawatt wind farm fell victim to the financial collapse of 2008 and the declining natural-gas prices that accompanied it.

Pickens’ fifth marriage was to Toni Brinker, widow of Norman Brinker, who turned Chili’s Grill and Bar restaurants into a national chain.