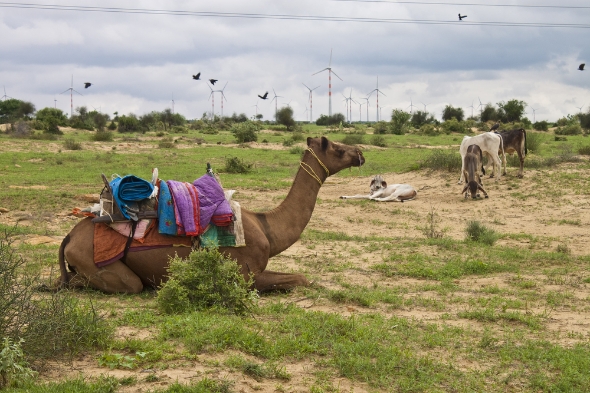 MUMBAI — Suzlon Energy Ltd. ceded its position as India’s top wind-turbine supplier in the year ended March 31 for the first time in at least a decade, according to figures from an industry group.

General Electric Co.’s installations surged more than sixfold to 122 megawatts, the biggest jump among the companies surveyed, according to the IWTMA data. The company’s gain in orders may indicate a shift in customer preferences as GE sells turbines alone in contrast to competitors who include land acquisition and permitting as part of supply deals.

GE won orders from developers such as Greenko Group Plc that are separating project development from turbine orders to improve returns.

Suzlon, which committed India’s biggest convertible bond default in October, reported difficulties in carrying out orders due to a lack of working capital in the past three quarters. The company completed a 95 billion-rupee ($1.8 billion) debt reorganization plan last month that will allow it to execute $7 billion of orders, Group Chief Financial Officer Kirti Vagadia said in an April 23 statement.

The company’s performance last year was hampered by its debt problems and by the suspension of two government incentives, Suzlon said in an e-mailed response to questions last week.

“We are confident of regaining market leadership in our home market – that we helped unlock and shape from the start,” the company said. Suzlon shares rose as much as 1.5 percent to 14.57 rupees in Mumbai today and traded at 14.48 rupees as of 11:16 a.m. local time.

Vestas Wind Systems A/S, which tied with GE as the world’s biggest turbine maker, posted an 87 percent drop in installations to 34 megawatts, IWTMA figures showed. The Danish manufacturer, one of the first to enter the Indian market more than 25 years ago, focused on bigger, more profitable markets elsewhere, Jaiswal said.

In total, India wind installations dropped 47 percent on year to 1.7 gigawatts of wind capacity after the expiry of government incentives, according to IWTMA figures.

Globally, a record 48.4 gigawatts of new wind capacity was added in 2012, according to BNEF. A tax incentive drove a record 13.6 gigawatts of installations in the U.S., where GE commissioned 96 percent of its turbines and Vestas sold 40 percent. The U.S. was Vestas’ biggest market.