SunEdison has just made back-to-back announcements of large solar project wins in India, a 5 GW MOU from the Rajasthan State government, and a 150 MW award from Karnataka Renewable Energy Development.

“This is yet another milestone in the journey of SunEdison in India to build a strong pipeline of projects that will be developed and commissioned in the coming years,” said Pashupathy Gopalan, president Asia Pacific Operations, in the company announcement, adding that “the PPA’s are likely to be signed in the next two to three months.”

The deals show that India is serious, one India solar analyst says. “The 5-GW MOU is obviously the largest announcement in India since it started its solar program in 2010, with the caveat that we want to see how the MOU plays out,” says Raj Prabhu, CEO of Mercom Capital Group, a clean energy communications and research firm based in Austin.

“This also reflects what is going on since June when elections were held; the new administration is very active in supporting solar, and each successive announcement ramps up their solar goals,” Prabhu says. “India is now serious about solar; the previous administration was never this aggressive, and now the central government message to the states is that they are serious about solar,” he adds. “There is a severe coal shortage there, but the Supreme Court has nullified a lot of the coal block allocations, pushing solar and wind instead,” he notes.

“India is quickly becoming a leader in solar energy, which has significantly boosted local job creation and increased energy access. The newly announced projects are a testament to the success of state-level solar programs in parallel with the country’s National Solar Mission, and benefit not just companies in India, but around the world,” says Meredith Connolly an Energy Law & Policy Fellow focused on India at the Natural Resources Defense Council.

The 5 GW Rajasthan project is expected to be completed in 500 MW increments, and will help the state reach its goal of 25 GW of solar capacity. Off takers from the project will include: Central Government of the Union of India viz. Solar Energy Corporation of India, NTPC Vidyut Vyaparan Nigam Limited and Power Trading Corporation. SunEdison says it “already has a strong presence in Rajasthan, with over 50 MW of large solar generation capacity and more than 1000 solar water pump installations.”

The 150-MW award is comprised of five smaller projects, and was won out of a field of 44 developers bidding for a total of 500 MW in Karnataka. It was the largest single award. Karnataka Renewable Energy Development Limited (KREDL) operates under the purview of Energy Department, Government of Karnataka. 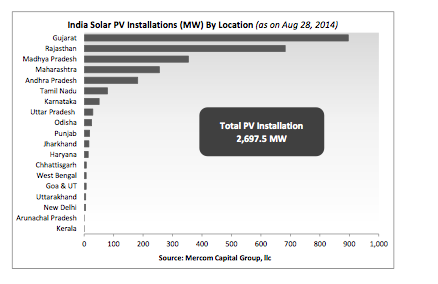 In late August, Mercom noted that India had already installed 500 MW of solar capacity. The firm also projected the 2014 total for Indian solar capacity at 900 MW before these two announcements were made; a new country-wide assessment will be ready in early November, Prabhu notes.