There are those in the New Energy community who are deeply uncomfortable with Big Energy of any kind, be it Big Oil, Big Coal, Big Wind or Big Sun.

The size of the nation’s energy demand, however, makes “Big” pretty inevitable. The Bigness is driven by a McMansion Dweller-Utility Complex (think Military-Industrial Complex) that has survived the Great Recession and is not likely to turn around until the suburban McMansionites move to yurts. And why should utilities and centralized power providers opt out of the arrangement? They make Big Money controlling energy and fulfilling their end of the bargain by keeping everybody’s lights and televisions and computers on.

Most wind power advocates long ago became accustomed to utility-scale projects and are now producing power at competitive prices. Geothermal, ocean energy and biomass developers have no choice but to think in such proportions if they hope to make their projects pay.

But many solar advocates still think in one-rooftop-at-a-time terms and resent the intrusion of utilities with large scale photovoltaic (PV) and solar power plant (SPP) projects. They contend that solar should be distributed generation and, though it may work in conjunction with the central grid it, it should not be controlled by centralized utilities.

Solar Power and the Electric Grid, from the National Renewable Energy Laboratory (NREL) of the U.S. Department of Energy (DOE), explains the basics of the nation’s power supply and transmission system and describes the most advantageous role solar energy can play in the “bigger” scheme of things. ::continue:: 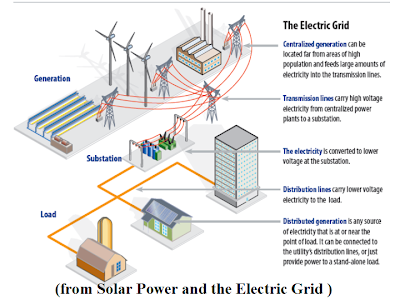 The NREL paper explains that solar energy’s variability limits its role as an independent source of power generation. While the variability can be compensated for with costly battery storage and more economy-wide implementation of Energy Efficiency measures, the variability can more cost-effectively be made almost irrelevant by connecting solar systems to the grid in conjunction with the variety of New Energy sources. The distributed generation from individual rooftop solar systems can then, at the same time, protect the grid by smoothing the load peaks. Solar energy is especially well-suited to this because load peaks most often occur at the hottest (and therefore sunniest) part of the day.

Important new work has been published in the last 1-to-2 years demonstrating that current grid capabilities allow for integration of very large amounts of New Energy. The ability to forecast and prepare for weather-induced resource variations and activity-induced load variations is growing all the time. The approaching leap in transmission capability from wider linkage via high voltage wires and more effective linkage via “smart” systems will be enormous. Yet it remains unlikely that any single form of energy generation, even that from the sun’s abundance, will be a final answer. 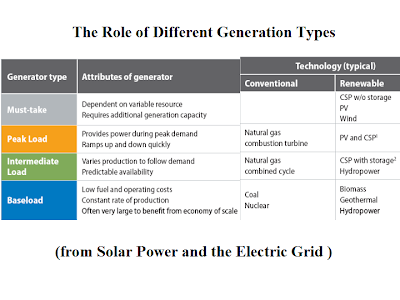 This post is based on Solar Power and the Electric Grid (March 2010, National Renewable Energy Laboratory)