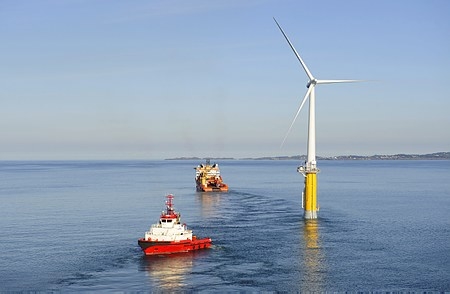 Statoil requested a commercial lease for its Hywind Maine project, which will have four turbines with 12 megawatts of capacity about 12 nautical miles (22 kilometers) from shore, the U.S. Interior Department said today in a statement.

The agency has awarded only one commercial lease for offshore wind development, for the Cape Wind project in Massachusetts’s Nantucket Sound, which has been in development for a decade and hasn’t begun construction. The Obama administration is seeking to accelerate the review of renewable- energy projects on the outer continental shelf and is considering proposals for offshore wind farms in 16 states on the Atlantic and Pacific coasts, all using standard turbines.

“This is the first time that this innovative floating technology is being considered for development in deeper waters offshore our coasts,” David Hayes, deputy secretary of the Interior, said in the statement.

The agency is also evaluating proposals for undersea transmission lines that may connect 7 gigawatts of offshore wind farms in the mid-Atlantic.

The Interior Department has begun an environmental review of the proposed area and also will determine whether there’s competitive interest from other developers. The review will be completed faster if Statoil, based in Stavanger, Norway, is the only company planning offshore wind farms in the area, according to the statement.