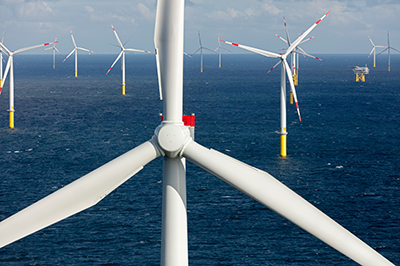 Statoil and EON will invest more than 1.2 billion euros ($1.4 billion) in the project, which lies 35 kilometers (56 miles) off the German island of Ruegen, the Stavanger-based company said in an e-mailed statement. Electricity production is scheduled to start in 2019 and will power as many as 400,000 households, it said. Siemens AG will supply the turbines.

“There’s no getting around for the big utilities to gear up investments in renewable power,” said Christopher Rodler, an analyst at equity researchers Montega AG in Hamburg, by phone. “Financial clout and staying power is needed for offshore.”

The project is Statoil’s first wind-power venture outside the U.K., where it holds a stake in the Sheringham Shoal wind farm, the company’s only commercial wind project in production. For EON, it’s the second large-scale renewable power development announced in as many months and is part of a strategy to invest as much as 1.5 billion euros annually in new clean energy projects.

“This is a significant investment in a relatively demanding financial situation for Statoil,” Irene Rummelhoff, executive vice president of the New Energy Solutions unit, said at a press conference in Oslo. “It shows we’re committed to building up a complementary renewables business in addition to oil and gas.”

At the end of last year, Statoil made a final investment decision on the 2 billion-kroner ($243 million) Hywind Scotland project, the world’s first floating wind farm. Statoil has also decided to go ahead with the Dudgeon project in 2014 and is a partner on two Dogger Bank projects, which were approved by the U.K. in 2015.

The investment is a milestone for the Norwegian company’s New Energy Solutions business unit, which was set up by Chief Executive Officer Eldar Saetre after he succeeded Helge Lund at the end of 2014. Statoil, one of Europe’s top producers of oil and natural gas, said it will now be able to deliver renewable energy to more than 1 million households in Europe.

Statoil has now committed to investing about 20 billion kroner in offshore-wind projects from 2012 to 2019, and that figure is likely to rise, Rummelhoff said in an interview after the press conference. Statoil is currently working with auction processes in Denmark, the Netherlands, Germany and France. Its executives have visited the U.S. to consider offshore wind work, where the company sees a “very positive development,” she said.

While the company has a goal of using its offshore competence to seek opportunities in renewable energy, it has said these projects will have to compete with traditional fossil-fuel projects in its portfolio on the basis of profitability at a time where the company is reducing spending because of a collapse in crude prices.

“We see enormously exciting opportunities and strong growth” in the wind power industry, Rummelhoff said. “We wish to participate — not to green-wash Statoil, but because we see real and good business opportunities.”

The deal also means that Germany could exceed its renewable energy targets, according to Bloomberg New Energy Finance.

“This project shows that Germany will beat their original target of 6.5 GW installed offshore wind by 2020 and get closer to the revised 7.7-GW target announced last week,” BNEF wind analyst Tom Harries said. “The Baltics are known to have lower capacity factors than the North Sea but an easier working climate for installation and maintenance access.”