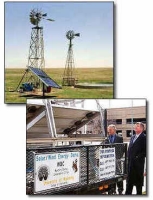 Cheyenne, Wyoming [RenewableEnergyAccess.com] With the northwest facing a drought, solar-water pumping applications are proving their worth in the region. Wyoming Gov. Dave Freudenthal directed the state to take an active role in helping farmers and ranchers access the technology, which he says solves several problems at once.

Freudenthal was on hand outside the Capitol for a demonstration of the pumps’ effectiveness. Developed by the University of Wyoming Electric Motor Training and Testing Center, the approach can help ranchers who typically rely on surface water for their livestock. The new pumps would allow them to reach underground water supplies in remote areas of their ranches. As livestock rarely venture far from water sources, more watering locations can mean an improved utilization of the range. “With Wyoming’s ongoing drought, surface water is not as readily available as we might like,” Freudenthal said. “My hope is that this new technology can help ranchers water their livestock using the means and areas that make the most sense for their operations.” The project is funded through the state’s petroleum violation fund, administered by the Wyoming Business Council. It aims to publicize uses of renewable energy and promote conservation, which is accomplished with this program because ranchers often use smaller, less efficient diesel engines to pump water for their livestock. During this pilot stage of the project, state officials hope to deploy between two and four pumps in each of the state’s 23 counties. As the program progresses, the goal is — with support from groups such as the Wyoming Association of Conservation Districts — to generate matching funds from the U.S. Department of Agriculture, private resources and other conservation programs to help provide pumps to all ranchers who qualify. Each rancher receiving a pilot pump will also be asked to provide such services as concrete pads for the pump or fencing the system. They will also be expected to allow public access to the solar- or wind-powered stock water pumps for demonstrations. Bob Yeik, who ranches on about 5,000 acres west of Yoder, Wyoming, has been running a solar-powered pump on a 2,000-acre pasture for almost two years. “It’s operated now for about two summers, and has been very satisfactory watering more than 100 head of cattle during the summer months,” Yeik said. “Without it, I would have had to consider a new windmill tower or running a mile and a half of electric line in there, which was going to cost me a large sum of money. We are, up to now, quite happy with the pump.” Ranchers are asked to submit applications providing basic information on their operations to a committee formed by conservation districts, rural electric cooperatives, UW Cooperative Extension and rural ranching organizations, in consultation with the Department of Agriculture. The pilot is being launched, said Department of Agriculture Director John Etchepare, to give ranchers a chance to see what is relatively new technology in action. “In all of the years I was in ranching, having reliable water sources was a number one priority,” Etchepare said. “We were almost totally dependent on our windmills for our livestock and wildlife water. Let me assure you that the wind does not always blow in Wyoming. This new technology comes highly recommended and looks to be a very valuable resource for Wyoming’s farmers and ranchers.”