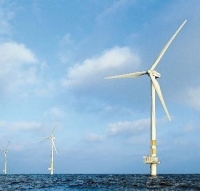 Boston, United States [RenewableEnergyWorld.com] Proponents of U.S. offshore wind projects like Cape Wind in Massachusetts and Bluewater Wind’s project for Delmarva Power in Delaware have had their hopes buoyed in recent months by new U.S. policy framework, including commitments from the Department of the Interior, the Minerals Management Service and the Federal Energy Regulatory Commission, that encourage the development of offshore wind energy generation capacity.

Against this backdrop, the MIT Energy Club las week brought leaders from across the wind space together to Boston to discuss the hurdles that have been cleared and those that still exist to implementing offshore wind technology in the U.S.

The day started with a presentation from an offshore wind developer. Peter Mandelstam CEO of Bluewater Wind told the 200 attendees that while the new federal commitments will go a long way to putting projects in the water, ultimately what developers need to do is work with communities and local officials to make them comfortable with offshore wind energy, which is exactly what Bluewater did in Delaware.

“Policy makers don’t always get it right but they’ve got it right now,” Mandelstam said in his presentation. “We got everyone on board from Vice President Joe Biden down to local mayors. We worked very hard to get this right to spend the time in meetings like this. Openness, transparency, everything on the record, everything on the website. This, I argue is the right way to do energy development.”

Currently, more than 1,100 megawatts of offshore wind capacity have been installed in Europe. It’s estimated that more than 250 gigawatts of capacity exist on the outer continental shelf (OCS) of the U.S., however siting wind farms to take advantage of those resources is something that still needs to be better addressed. Dr. Bruce Bailey, president and CEO of AWS Truewind talked about the progress that is being made on that front as well as in wind modeling/forecasting for offshore farms on both the OCS and in the great lakes region.

“The offshore environment is one where there are fewer data points on current wind conditions, sea surface temperatures and the like. So models need to work with fewer input data parameters,” Bailey said. “Offshore wind really needs measurements that are well above the surface. Most weather buoys are three to five meters above the ocean, but most wind turbine hub heights are 80-, 90-, even 100-meters above the surface and the blades on those turbines extend even higher. So we really need to have some tall meteorological towers installed to collect wind and temperature and humidity data to really better understand that environment and to validate models.”

Dr. Jon McGowan, professor of engineering at UMass Amherst has been working on offshore wind energy technology for the better part of the last 40 years. He gave the crowd a look back in time and said he is amazed with the progress that has been made by the industry hopes its here to stay.

“I’ve seen this go from a classroom idea, the nutty professors we were once called, to a commercial product and that’s pretty exciting,” McGowan said. “We’ve seen the wind turbines go from people saying they’d never make them bigger than 100 kilowatts to five to ten megawatts. So we’ve seen size go up, reliability’s gotten better. There’s a lot of excitement and my hope is that we do half the power in the country with wind.”

Dan McGahn, senior vice president and general manager at AMSC Superconductors, on the other hand, gave the crowd a look ahead at some of the new technologies that are on the horizon for offshore wind energy.

McGahn said that AMSC’s superconductor generator technology, which was developed in collaboration with the U.S. Department of Defense and is set to power the next generation of destroyers class vessels, could will help move the industry away from gearboxes, cutting down on maintenance and down time for individual turbines. The technology relies on high temperature superconductor (HTS) wire to transmit power from turbine rotors to substations. The company says that using HTS wire takes two-thirds of the weight out of a turbine generator.

“Currently for land based wind you have a doubly fed induction machine. That’s really the workhorse of the market today. It has very good cost to weight ratio. It has very good performance. They’re geared systems and the thing that tends to fail is the gear,” he said. “The market onshore and eventually for offshore wants to move to direct drive systems, gearless systems. The challenge there is now you’ve increased the cost and you’ve increased the weight. So ultimately with an HTS Superconductor generator in a wind turbine you should be able to have the cost the performance of a doubly fed machine with those benefits, but also the reliability and the efficiency of maintenance of a direct drive machine.”

RenewableEnergyWorld.com had a chance to catch up with some of the speakers at the workshop. Play the video below to hear more on what they think about the potential for offshore wind energy.