If somebody said he thought planting beanstalk beans would be good for the nation right now, he might not be taken too seriously. But if, a week later, the President of the United States made a 15-minute primetime speech from the Oval Office and a line from that speech mentioned that the nation needed to start planting beanstalk beans, it is likely the guy who mentioned the idea originally would get more attention.

Last week, Microsoft founder Bill Gates appeared before a Congressional panel to emphasize the contention in A Business Plan for America’s Energy Future, from the Gates-led American Energy Innovation Council (AEIC), that the nation needs to dramatically boost its investment in New Energy and Energy Efficiency research and development.

This week President Obama’s speech from the Oval Office about the Gulf oil spill included this passage: “Some believe we should set standards to ensure that more of our electricity comes from wind and solar power. Others wonder why the energy industry only spends a fraction of what the high-tech industry does on research and development – and want to rapidly boost our investments in such research and development.”

Having won a place in President Obama’s speech, Mr. Gates’ idea certainly deserves even closer scrutiny than would have been the case just on the strength of Mr. Gates’ own formidable recommendation. A Business Plan for America’s Energy Future lays out the case for increased New Energy and Energy Efficiency research, development and deployment (RD&D) spending in convincing detail. The U.S., it points out, leads the world in defense, health, agriculture, and information technology because of a commitment to intelligent federal investments in those sectors. In New Energy and Energy Efficiency, where it has failed to invest at competitive levels in innovation since the 1970s, it is falling behind world leaders, losing out on enormous economic opportunities and paying the high price of fossil fuel addiction. ::continue::

The nation’s failure to invest even one-half of one percent of its total energy expenditure for New Energy and Energy Efficiency RD&D has left it dependent on fossil fuels price vagaries, has it sending ~$1 billion out of the country daily for oil, and continues to cost it blood and treasure in the protection of energy supply lines and sacrificed human health, lives, livelihoods and ecosystems to pollution and climate change. 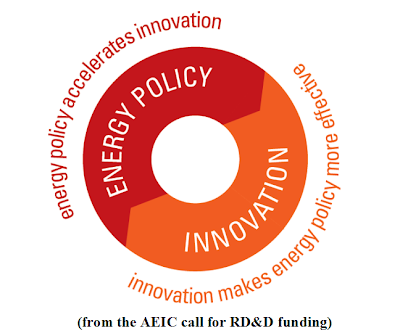 The motivation behind the report turns out to be patriotic but in its essence is self-interest: Realizing the enormous opportunites will make energy cheaper and more secure and allow every U.S. business to compete more successfully. But the opportunities can only be realized if the federal government leads.

It was a shift in federal support for defense, aviation, and health care – to name only 3 instances – that led to engagement by the regulated free market. Energy especially needs such support because policies and subsidies now support the Old Energies. These drivers must be shifted to the New Energy opportunities before the private sector can or will commit itself.

In addition to vastly increased RD&D, the business leaders call for that most evasive of all policies, a comprehensive national energy plan. It would, they say, entail a public-private collaboration and supply the 3 prerequisites to energy innovation: (1) a pipeline of new inventions; (2) a set of policy reforms to stimulate market demand; and (3) a highly skilled workforce to invent and deploy.

The AEIC paper addresses only the pipeline of inventions through its argument on behalf of RD&D investment. The policies that compliment RD&D investment and sustain the market, the leaders say, must (1) replace on-again, off-again policies with long-term price/market signals that give private sector investors confidence; (2) encourage competition among technologies with performance standards that allow the market to choose the most effective, lowest-cost technological innovations; and (3) reward research advances, performance improvements and continued innovation.

The paper emphasizes that the nation must create and nurture a science and engineering workforce to do the innovation. It must (1) vastly improve K-12 science and mathematics education; (2) strengthen its commitment to long-term basic research; (3) make the U.S. the best place for the world’s students to study and do research and award a green card with every foreign student’s higher education diploma in science, technology, engineering or math; and (4) make the U.S. the best place in the world to innovate, invest in manufacturing and marketing, and create high-paying jobs. 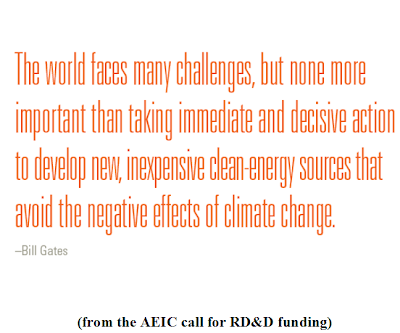