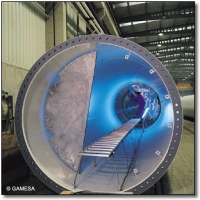 Harrisburg, Pennsylvania [RenewableEnergyAccess.com] In the same week that Congress passed an extension of the wind energy production tax credit (PTC) Spanish wind energy company Gamesa has agreed to base its new U.S. headquarters and East Coast development offices in Philadelphia, and to open a manufacturing facility for wind turbine blades in the state.

Gamesa also has worked out 400 MW worth of power purchase agreements and letters of intent to sell wind-generated power to Pennsylvania utilities, raising the amount of clean electricity available in the grid for Pennsylvania consumers. The 400 MW are enough to provide clean electricity to almost 135,000 homes. The announcement comes after several months of negotiations with the administration of Pennsylvania Governor Edward G. Rendell, which is eager to enact a statewide renewable portfolio standard (RPS) sometime in the future. “As I have made clear, energy is a top priority for my administration and is a strategic economic sector for Pennsylvania,” Rendell said. “America’s energy past is grounded right here in Pennsylvania, where we led the world in coal and oil. The nation’s energy future is right here, too. We are leaders in wind-energy production and are gaining fast in the development of fuel cells and other advanced energy technologies.” Pennsylvania is already a leader on the East Coast with wind-farm production capacity at 129 MW, which is enough to power almost 45,000 homes. Another 49 MW is scheduled to come on line within the next year. Gamesa, a publicly traded company on Spain’s stock exchange, is headquartered in Vitoria, Spain. The company is the second-largest wind-energy manufacturer and the only vertically integrated wind-energy company in the world, meaning the company manufactures the parts for wind-energy units and then develops the wind farms itself. “Similar to our achieving industry-leader status in the wind-energy business in Spain, the world’s second-largest wind energy marketplace in terms of installed capacity, our intention is to advance to all corners of the North American marketplace from our Pennsylvania base,” said Inaki Lopez Gandasegui, Chief Executive Officer of Gamesa. The site for Gamesa’s manufacturing facility, which should employ as many as 400 workers, has not been determined. The company expects to make that announcement within the next month. Both the U.S. headquarters and East Coast development office will be located in Philadelphia. Together with the construction, operation and maintenance of its wind farms, Gamesa’s two offices and factory are expected to create as many as 1,000 jobs in the Commonwealth over the next five years. Rendell recently launched some major initiatives to build a clean, indigenous, diversified energy industry in the state, including re- establishing the dormant Pennsylvania Energy Development Authority. Together with a broader fund at the Department of Community and Economic Development, PEDA can provide nearly $1 billion in tax-free bond financing for clean energy projects. The administration also is leading by example by developing a plan to ensure that in 10 years, 10 percent of all of the energy generated in the Commonwealth comes from clean, efficient sources. Governor Rendell directed the state to purchase 10 percent of its electricity from clean, advanced energy sources. Helping to spur the market share for renewable energy is the $5 million Pennsylvania Energy Harvest grant program administered by the Department of Environmental Protection. The grant program provides the last increment of financing for clean and renewable energy projects that use energy sources such as biomass, wind, solar, small-scale hydroelectric, landfill methane, coal-bed methane and waste-coal.