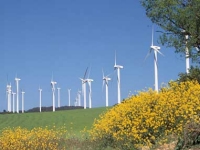 Vienna, Austria [RenewableEnergyAccess.com] Spain — the world’s second leading producer of wind power — has passed a new law allowing wind parks to be built off its coast. It is predicted that the offshore wind parks will generate between 2,000 and 3,000 megawatts (MW) of electricity by 2020. That would represent a major contribution to Spain’s future wind power production.

In 2006, Spain had a total of 11,730 MW of capacity installed on its mainland. The new offshore wind farms will be built on sites along Spain’s 4000-kilometer-long coast under a licence scheme.

“Spain is a peninsula with sea on three sides and so is one of the best places in the world for building wind farms at sea,” Carlos Montana from the Spanish Ministry of Industry told RenewableEnergyAccess.com.

Spain’s Ministry of Industry will undertake a study of the coastline to identify the best sites for building wind turbines and to assess the impact of wind parks on the landscape. The study is due to be completed by July 1st, 2008.

Experimental offshore wind farm projects have already been built on the sea-bed in sites around Cadiz, Huelva Castellon and in the Ebro Delta.

Operators applying for a license to build an offshore wind farm in one of the government-designated zones will have to show that their wind park will generate at least 50 MW of electricity and also demonstrate that the wind turbines do not ruin the environment.

Concerns about the impact of off shore wind parks on Spain’s thriving tourist industry have been one reason why the construction of wind turbines has been restricted to the country’s mainland.

More than 400 wind farms and 12,000 wind turbines are in operation in every part of the country, except in Madrid, Extremadura and Cantabria regions.

The wind parks generated 8 percent of the country’s total electrical consumption in 2006, supplying 6 million households and reducing carbon emissions by about 9.2 million tons, according to the IDEA, the Institute for the Diversification and Saving of Energy, a Spanish government body overseeing renewable energy policy.

As a result, Spain is ranked second only to Germany in the world as a producer of wind power. The new law will now clear the path for the development of huge wind farms at sea in Spain.

Spain’s government has set a target of obtaining 12.1% of the country’s total primary energy consumption from renewable energy sources by 2010, and wind power could be supplying as much as half of the renewable’s share.

The amount of energy generated from wind power in Spain has increased 16-fold since 1995.

The Council of Ministers, [Consejo de Minsitros] passed the law on off shore wind parks, the Real Decreto, on July the 20th; the law came into force officially when it was published in a State Official Bulletin, [Boletín Oficial del Estado], on August 1st 2007.

Jane Burgermeister is a freelance science writer based in Austria.