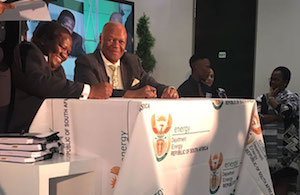 The South African government today signed power purchase agreements for renewable energy projects that have been delayed for years.

The SA Department of Energy said that the Minister of Energy, Jeff Radebe, signed agreements for 27 Renewable Energy Independent Power Producer Projects worth 55.92 billion rand (US$4.7 billion) in new direct investment in the energy sector. The department said that the projects are located throughout the country and are mostly rural.

It is with great pleasure that I announce here today the signing of the agreements for the 27 projects procured under the Renewal Energy Independed Power Producer Procurement Programme Bid Windows 3.5 and 4 . @Energy_ZA #energy pic.twitter.com/a6a7gyEV1m

“The department reached this milestone following a long period of uncertainty, but with this important milestone government reconfirms its commitment not only to renewable energy, but also to a solid partnership with the private sector as it pursues energy’s core position in the South African economy,” the SA Department of Energy said in a statement.

“The conclusion of duly procured power purchase agreements signal a reawakening of South Africa’s Renewable Energy Power Producer Procurement Program (REIPPPP),” the South African Wind Energy Association (SAWEA) said in a statement. “The program was born out of government’s vision for an expansion of South Africa’s energy mix to include renewable power from independent producers with a range of clear developmental imperatives.”

“The recovery of the domestic manufacturing industry is necessitated by the effects of the delay, which saw several manufacturing facilities having to retrench staff due to a lack of further component orders,” SAWEA said.