More
Home Solar SolarWorld To US Solar Developers: “We Want the Same Things” 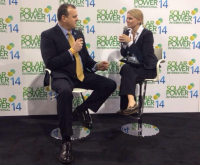 LAS VEGAS — When Rhone Resch opened Solar Power International 2014 by telling the industry that it needs to fight for solar the same way that the Koch Brothers fight for coal, he probably wasn’t thinking about SolarWorld and its fight with China over what it says are unfair manufacturing subsidies. But, at least according to Ben Santarris, Strategic Affairs Director for SolarWorld Americas and Tim Brightbill of the law firm WileyRein, fighting for its industry is exactly what SolarWorld is doing.

Santarris said that his company and the U.S. installers and developers who have criticized SolarWorld for filing a trade case against China, which led to import duties, actually have the same goals. “We agree with them. We all want the same thing,” said Santarris.  “We want long-term sustainable pricing decreases. What the Chinese did was not sustainable. They were losing money.  They were going under,” he continued, pointing to the bankruptcy filings of companies like Suntech.

But where some U.S. solar developers may not be concerned with the country of origin of the solar equipment that they are installing, SolarWorld is.  “What we want is a restoration of fair competition that naturally leads to price decreases over time,” said Santarris.  “In the meantime, we think that we need to protect the right of U.S. manufacturers to compete fairly with other manufacturers and not with other sovereign governments.”

SolarWorld believes that the Chinese government has been propping up Chinese solar manufacturers for many years. In 2011, it filed and subsequently won a lawsuit against China that resulted in import duties on cells made in China. SolarWorld filed another lawsuit in 2014 that expanded the scope of the investigation to any module made in China. The U.S. Commerce Department is expected to announce a decision in that second case in mid-December.  Further, a decision about the challenge to the original case could come down sometime next year, and maybe sooner than that, said Brightbill.

Clock is Ticking on a Negotiated Solution

The Solar Energy Industries Association (SEAI) has been facilitating a dialogue between SolarWorld and a few of the Chinese manufacturers in an attempt to arrive at a negotiated solution, something that SEIA maintains is the preferred way forward, according to John Smirnow, VP of Trade and Competitiveness for the organization.

Smirnow explained that the U.S. and Chinese governments both want to see a deal happen and that there are ongoing high-level talks.  He said that the governments would look to the industry to arrive at a detailed resolution and SEIA is hoping that both parties will accept the proposed resolution that it put forward in August, or a solution resembling it.  SEIA’s solution calls for the development of a solar manufacturing settlement fund and a minimum market price among other things.

Timing is critical, however, as any negotiated resolution would have to be made public by mid-November, exactly 30 days before the mid-December commerce department ruling. Smirnow explained that U.S. President Obama is set to meet with Chinese President Xi on November 12 and he speculates that if a deal were to be struck, Obama could announce it at that meeting.

“The industry is working very hard to find a win-win solution,” said Smirnow. He said that there is talk of a suspension agreement, which means that the investigation of the new trade case would be suspended and a resolution would be adopted.  Any deal that involved the modifications to original trade case would have to be agreed to by Solarworld, said Smirnow.

Litigation is failing the solar industry and a negotiated solution is necessary, he said, urging other solar stakeholders to let legislators know that a deal is necessary.

Brightbill declined to comment on any negotiations but said that SolarWorld “can live with either” a negotiated solution or additional import duties. SolarWorld has publicly stated and Santarris reiterated that any deal it would agree to would have to include an end to the unfair subsidies that the Chinese government has allegedly been giving to its manufacturers.  Brightbill also said that it is his job to be skeptical of a deal and that he would not recommend that SolarWorld accept any deal he feels would not be enforceable.

On the other hand, Brightbill posited the theory that size of the U.S. market could influence China to make a deal.  When the Chinese accepted a deal with the EU, that market was the largest in the world, he said. Now the U.S. market is one of the larger markets in the world. “I think China has awareness that if it wants to be in the U.S. market, it needs to address the situation,” he said.

Perhaps Solarworld’s fight with China can be compared to the U.S. renewable energy industry’s fight with traditional power generation.  SolarWorld claims that it is simply looking for a level-playing field, an expression that is often bandied about in reference to the permanent tax benefits enjoyed by the oil and gas industry but which are granted and then taken away for renewables.  Said Santaris: “So the [solar] industry was pioneered here, it was developed here, we want to continue to do that and we want to have competition here, too. But we don’t want to be subjected to a foreign governments interference in our marketplace.”

Santarris and Brightbill believe that if they succeed in either stopping the alleged Chinese manipulation of the market or in imposing duties on modules made in China, it will allow a domestic solar industry to gain more traction, fostering in the next generation of solar. You are going to have “more U.S. workers, more innovation…whatever’s coming next will be here in the United States,” said Brightbill.

Jobs will be created through the follow-on industries that experienced a slowdown. “Part of the thing that we have seen is that not only have dozens of U.S. cell and module companies shut down, but parts suppliers have shut down too,” said Brightbill.

Santarris believes that the “promise of solar” is undermined if you don’t have manufacturing and deployment in your own country because you can’t achieve energy independence if you “are dependent on a foreign market not for competitive reasons but for geo-political reasons,” he stated.

Brightbill acknowledged that this battle has been long and hard. “It’s worth it,” he said.  “It’s a great company and really it’s the domestic industry too. There are lots of examples of innovation out there and great jobs.  It’s worth fighting for.”