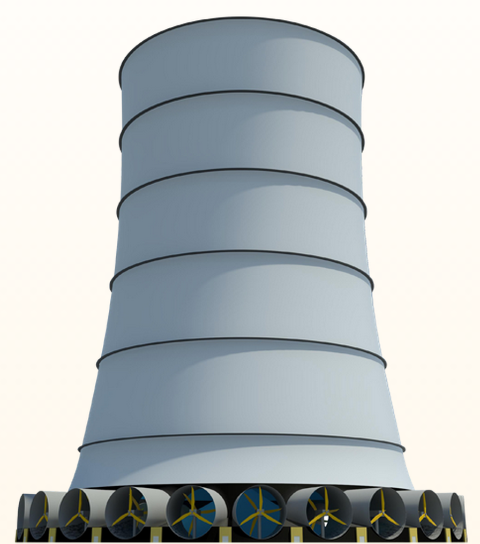 NEW YORK — Solar Wind Energy Tower Inc. won approval from an Arizona city to develop a $1.5 billion project that would use ambient desert heat to create a draft to generate electricity, in a concrete colossus that would be the tallest structure in North America.

The 2,250-feet (686-meter) project, which resembles a nuclear plant’s cooling tower, would be capable of generating at a average rate of about 435 megawatt-hours over the course of a year, Ron Pickett, chief executive officer of the three-year-old Annapolis, Maryland-based company, said in a phone interview today. In July and August, the Southwest’s hottest and driest months, the plant could produce more than 1,200 megawatt-hours. 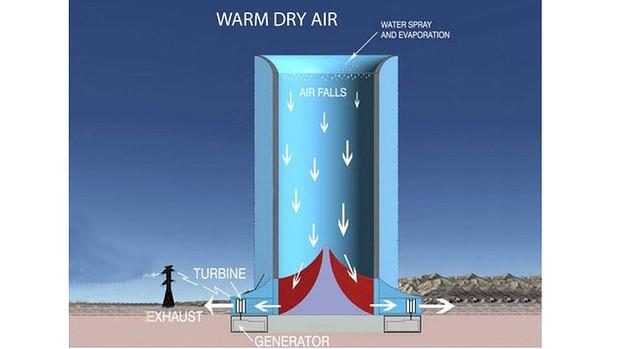 The project, which doesn’t yet have financing or a customer for its electricity output, would use technology created by Solar Wind. In the dry desert air, water would be injected in a mist near the top of tower, causing the air to cool and gain density. The draft created by the sinking air would exceed 50 miles per hour as it’s forced through a ring of turbines at the tower’s base, generating electricity.

“This is a game-changer in certain areas — hot, dry climates,” Pickett said. The company is proposing this project near the Mexico border to prove the concept, with the goal of licensing the process to developers. The technology would work in Africa, Australia and “you can throw a dart in the Mideast, and it works there,” he said.

San Luis, a city of 26,000 residents about 20 miles southwest of Yuma, Arizona, agreed to give the project necessary rights of way and sell it water under a 50-year contract. Terms weren’t disclosed for the agreement, which was approved by the city council on April 23.

Solar Wind gained 57 percent to 1.3 cents at the close in New York. The company, which expects to get the project operating as early as 2018, has a market value of $6 million.

Local utilities and the U.S. Defense Department have inquired about buying the project’s power, said Pickett, who was previously CEO at Telkonet Inc., a smart-grid technology company.

Image: How the solar wind tower works via futureenergy.ultralightstartups.com