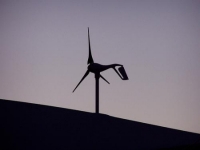 The solar panels have produced about five times as much electricity as the wind turbine over the past 14 months. The sun’s ability to generate more electricity than the wind – even during short winter days – has surprised the utility’s engineers.

Inland Power set up the experiment to help the utility customers compare alternative-energy options for their homes. Each year, the utility fields from 50 to 60 calls from people interested in producing some of their own electricity. Initially, most think they want a wind turbine, Damiano said.

To help customers with the analysis, Inland Power officials decided to collect their own data.

The utility bought a 35-foot wind turbine and a bank of solar panels. The systems are representative of technology scaled to individual homeowner use, Damiano said. Each cost from $22,000 to $24,000 to install.

“It’s the West Plains, so there’s a perception that the wind is always blowing,” Damiano said.

But wind is more erratic than people realize, he said. The wind dies down, for instance, during hot weather and cold spells. Inland Power’s turbine is similar to the larger ones installed in the Columbia River Gorge. It needs a stiff breeze of around 12 miles per hour to start producing electricity.

Solar panels, on the other hand, generate a certain amount of electricity even on cloudy days.

During the first 13 days of January, Inland Power’s solar panels produced 35 kilowatt-hours of electricity, compared with 10 kilowatt-hours from wind generation.

The results don’t surprise Linda Finney, who sold the wind turbine to Inland Power. She and her husband initially installed it on a grassy hill above their home on the Palouse Highway, about 12 miles south of Spokane. After two years, they took the turbine down because it wasn’t generating the results they hoped for, and they replaced it with 16 solar panels.

Damiano said some customers do the research and still end up with wind turbines. In areas heavily shaded by trees, for instance, wind turbines can outperform solar panels.

In the Inland Power pilot project, the solar panels produced about 15 percent of a typical household’s electric needs over the course of a year. The wind turbine produced less than 3 percent.

From a cost-benefit standpoint, erecting a wind turbine or putting in solar panels is still a reach for most homeowners, Damiano said. Those who take the plunge are making a lifestyle choice to reduce their carbon footprint, he said. Recovering the installation costs for turbines or solar panels can take years, even with the 30 percent tax subsidy available to homeowners.

“It will take you a chunk of time,” Finney acknowledged. But she encourages people to think about the long-term benefits.

Becky Kramer is a reporter for The Spokesman-Review in the Idaho department. She covers the environment, natural resources and utilities.

Copyright 2011.  Reproduced with permission of The Spokesman-Review. Permission is granted in the interest of public discussion and does not imply endorsement of any product, service or organization otherwise mentioned herein.