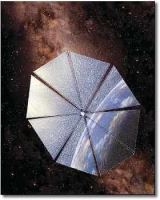 Pasadena, California [RenewableEnergyAccess.com] This week the Planetary Society launched Cosmos 1, a prototype “solar sail” into space, marking the first attempt to prove that thin films of reflective material can be deployed in space to capture the solar winds for a new form of space travel. Tragically, all indications at this print time suggest the strong likelihood of there having been a failure at launch and a total loss of the delivery vehicle.

The Planetary Society’s work, along with other solar sail projects, is a clear departure from traditional solar applications reported on in RenewableEnergyAccess.com. They do, however, reflect an interesting and promising new mode for space travel using the same plentiful rays that power PV and solar thermal systems throughout the world. Proponents say solar sailing is the only known technology that may someday enable interstellar flight. Solar sailing is done not with photovoltaics or actual wind, but with reflected light pressure – its push on giant sails can change orbital energy and spacecraft velocity continuously. Although they accelerate slowly, they will continue to accelerate for a long time without the need for fuel. Most spacecraft are launched from land, but the Planetary Society’s craft was launched on converted intercontinental ballistic missile from a Russian submarine beneath the Barents Sea. A network of ground stations tried to track and receive data from the spacecraft after launch. The prime Russian stations are near Moscow, but additional tracking sites around the world include sites operated by US government agencies: the National Oceanic and Atmospheric Administration (NOAA) and the U.S. Air Force. Within the past 24 hours the Russian space agency (RKA) has made a tentative conclusion that the Volna rocket carrying Cosmos 1 failed during the firing of the first stage. There still remains a very distant possibility that the craft may have made it into a shallow orbit, but those odds are decreasing by the hour as no definitive signals or signs have appeared. “With failure of Cosmos 1 virtually certain, the team members that have been staffing Project Operations Pasadena have elected to return to their homes,” said Emily Lakdawalla, Project Operations Assistant and Image Processing Coordinator for Cosmos 1, on the Society’s Web-log. Once injected into Earth’s orbit, the sail would have been deployed by inflatable tubes, which pull out the sail material and make the structure rigid. Cosmos 1 had eight such blades, each 50 feet long, configured like a giant windmill. The blades can be turned like helicopter blades to reflect sunlight in different directions. This enables the sail to “tack,” tracking the sun and controlling the attitude of the spacecraft. Each blade measures 15 meters in length and is made from 5-micron-thin aluminized, reinforced Mylar — about 1/4 the thickness of a trash bag. Both Japan and the United States are investigating solar sails. Japan’s Institute of Space and Astronautical Science (ISAS) successfully deployed two solar sails in space last August, but did not attempt to control the sails once they were launched. Last month, Alliant Techsystems and the National Aeronautic and Space Administration (NASA) conducted a successful ground test of a solar sail measuring 66 feet wide in a vacuum chamber operated by the NASA Glenn Research Center. “The team may be scattering, but it’s not over,” Lakdawalla said. “The search for the spacecraft continues,” “Many of our members are telling us they’re ready to try again. We can’t say whether or not we’ll try again with this mission until we find out what really happened. But we’ll certainly stay in the business, and try more audacious things.” For updates from the Planetary Society’s Web site, see the following link.