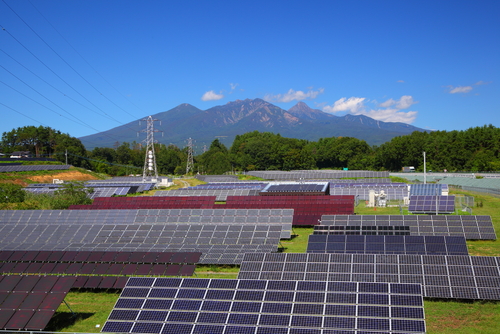 The Land of the Rising Sun is living up to its nickname. According to a new report from the SolarSuperState Association, Japan added 76 annual watts per-capita of solar PV capacity in 2014, placing second just below Qatar and dwarfing gains made by the U.S., Germany and the UK.

In doing so, Japan leapfrogged from 15th to 10th place in the SolarSuperState yearly rankings for countries with the highest amount of cumulative per-capita solar PV capacity. That number now stands at 183 total watts per-capita for Japan. Liechtenstein ranks at the top with 481 watts per-capita, followed closely by Germany with 473. Ranked third, Italy now stands at 303 watts per-capita. The U.S. is 13th, with a mere 62.

The report also points out that the vast majority of PV plants in Japan are ground-mounted, emphasizing that the potential for small roof-mounted installations remains largely untapped. Stephan Volkwein, secretary general for the SolarSuperState Association, said this discrepancy has mostly to do with “high bureaucracy” and “little rights” for small rooftop PV companies.

In 2014, Japan ended its national residential PV subsidy program after 20 years. Earlier this year, it was reported that Japan was considering lowering incentives for solar power development by as much as 16 percent.

“The rights of the small rooftop PV investors in Japan should be increased,” Volkwein said. “Current Japanese feed-in tariffs for photovoltaics are high, much higher than in other growing photovoltaic markets. Unfortunately, the current energy policy framework is no adequate answer to this economic threat.”

Elsewhere in international solar PV rankings, the report found that Bulgaria, Slovenia, Spain and Slovakia made no gains in their annual watts per-capita. According to Volkwein, “high subsidies for nuclear and fossil fuel” are the reasons for stagnation in those countries.

Data for the SolarSuperState annual rankings was compiled from information from the World Wind Energy Association, national renewable energy associations, national statistics, utility company statistics, and the association’s own research.