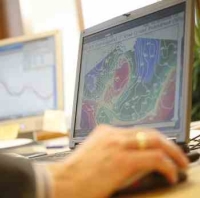 Berlin, Germany [RenewableEnergyWorld.com] There’s a storm brewing, the wind speed is picking up and you’re asking yourself: Just how much electricity will a particular wind park produce in the next five days? How much electricity will all the wind parks located in particular region, or even country, produce in the next few days for the national grid? Will the wind keep on blowing? And whereabouts exactly?

Thanks to a new system developed by a German university spin-off, it’s now possible to obtain an accurate forecast of the energy output from wind parks for up to ten days in advance.

The Previento system, developed at Oldenburg University in northern Germany in cooperation with researchers from Denmark’s Riso National Laboratory, can predict not only how much electricity a specific wind park in Germany will produce but also the total amount of electricity the 20,000 or so wind parks dotted around the country will generate in the coming days and with a high level of accuracy.

Armed with these predictions, Germany’s grid operators can now calculate the amount of additional electricity they will need from fossil-fuel plants to compensate for troughs in wind output — and so ensure the expected power demand is covered reliably.

“The German electricity industry has to able to plan today how much electricity it will need tomorrow as well as how that electricity will be produced. That is what our system helps them to do,” Dr. Matthias Lange from energy & meteo systems, the Oldenburg spin-off, said.

“Accurate predictions about wind power allow grid operators to save millions of euros through efficient scheduling,” he added.

A system that can predict how much electricity is going to be available from wind power for the national grid has become so important in Germany because wind’s share of the country’s electricity generation is growing all the time, and reshaping the electricity industry.

Wind power accounted for 7.2 percent of Germany’s total electricity consumption at the end of 2007 with 22,200 megawatts (MW) of installed capacity.

According to the German Wind Energy Association (BWE), installed capacity is set to double by 2020 with 45,000 MW installed on land and 10,000 MW offshore.

In fact, the BWE estimates that every fourth kilowatt hour of electricity will be coming from wind power within 12 years.

“The amount of wind power used today in Germany is so big that all the other types of power plants have to adapt themselves around the wind power output and increase or decrease their contribution depending on what wind does,” said Lange.

Because Previento can give plenty of warning about big deviations and sudden peaks and troughs in wind power output, it also plays a big role in the regional energy spot markets. The amount of wind power entering the grid impacts electricity prices: the more wind power available, the lower the electricity price becomes, Lange explained. This is because less conventional energy has to be purchased by energy providers for the next few days to cover the expected demand.

The predictions are more accurate, the shorter the timeframe — but predictions for up to 10 days in advance are available, Lange said. The prediction error of the system is within 5 percent in 70 percent of the cases in Germany.

So what makes Previento’s predictions so accurate?

According to Lange, the key is that the system was developed inside Oldenburg’s physics department — and atmospheric physics as well as the shape of local terrain strongly influences the amount of electricity a wind park will produce.

The system calculates the amount of wind available at any particular location using a variety of weather models available from multiple weather services. The German Weather Services, for example, supplies information on wind speed, wind direction, pressure and a vertical temperature profile for rectangular grids with a resolution of 7 kilometers.

Previento processes this data and combines it with data about the features of local terrain of a wind park, such as the amount of wooded area or the bodies of water around a wind park to form an accurate estimation of the electricity output at any given time.

The system is proving a global hit with interest in it coming from Spain, Scandinavia, America, Canada and Ireland.

The system was developed in 2001 by the energy meteorology research group at the Carl von Ossietzky Universität Oldenburg and ForWind, the center for wind energy research based in Oldenburg. The energy & meteo spin-off company was founded in 2004, and is a pioneer in the new discipline of energy meteorology which puts weather forecasts at the service of renewable energy.