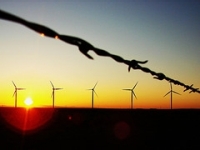 Washington, DC, United States — Commercial wind development has dropped sharply so far in 2010, according to SNL Energy data and the American Wind Energy Association (AWEA). Data from AWEA showed wind installations in the third quarter dropping to their lowest level of any quarter since early 2007. AWEA attributed this to continued weak demand in U.S. power markets, as well as continued lack of certainty surrounding U.S. energy policy.

Overall, 20 states had at least 1 MW of wind capacity come online in the first three quarters of 2010, compared to 24 states for this period in 2009.

Illinois led all states for wind capacity brought online at 716 MW and 427 turbines, representing a 256% increase from the 201 MW installed in the first nine months of 2009. Illinois was one of only three states to see a jump in 2010 installations over 2009 levels. The 716 MW came from three projects, the largest of which was the 300-MW Streator Cayuga Ridge South wind farm.

Forty wind plants had come online in 2010 through the third quarter, with the largest being the 300-MW Streator Cayuga Ridge South project. The project uses 150 Gamesa 2-MW wind turbines, and the Tennessee Valley Authority has a power purchase agreement for the full capacity of the plant through 2030.

There are only two operating wind farms in the U.S with at least 500 MW online, the 736-MW Horse Hollow and the 663-MW Capricorn Ridge Wind farms, both owned by NextEra. However, nine wind projects were announced with plans for at least 500 MW of new capacity through the end of September.

One of the largest projects announced was the 600-MW Cimarron Bend Wind in Kansas, owned by TradeWind Energy LLC. The project is estimated by SNL Energy to cost $1.3 billion and is the second-largest project planned in Kansas. Cimarron Bend also represents the largest planned wind farm for TradeWind, which currently has no wind plants in operation.

Another 600-MW project was announced during the period when Duke Energy Corp. announced plans for the Las Palmas Windpower Project in Cameron County, Texas. The project is the largest of eight wind projects currently planned by Duke.

Riverstone Holdings LLC‘s Ocotillo Express Wind in Imperial County, Calif., was the third-largest wind plant announced in the first three quarters of 2010 with a combined nameplate capacity of 552 MW spread out over two phases.

The 500-MW Lake Michigan Offshore (Aegir II) project made the list of the top 10 wind plants by capacity announced during the first nine months of 2010 and is one of only three offshore wind projects announced so far in 2010. The $2 billion project is jointly owned by Havgul Clean Energy AS and Scandia Wind Offshore. Those companies also plan to develop an additional 250-MW of offshore wind in Michigan through the Lake Michigan Offshore Wind (Aegir I) project.

The largest wind project with capacity placed under construction during the period is the Lower Snake River (Garfield) project, with 343 MW, under construction by the end of September. The project is one of two in the works for owner Puget Sound Energy Inc., which already has almost 430 MW of wind currently operating. The plant will use 149 2.3-MW Siemens SWT turbines, carry an estimated price tag of $850 million and come online in mid-2012. An additional 557-MW are planned at the plant but not yet under construction.

The 290-MW Shepherds Flat Central project in Oregon, ultimately owned by Caithness Energy LLC, was the second-largest project with capacity placed under construction during the first nine months of the year. The plant will use 116 of the larger GE Energy 2.5-MW turbines. The project is one of three Caithness has in development in Oregon.

General Electric Co., well known for its 1.5-MW turbine model, is a dominant player in the U.S. market. In 2009, GE ranked first in AWEA’s turbine installation rankings, and it continues to perform well in 2010. For the nine-month period ended Sept. 30, GE remained the top manufacturer by U.S. installations with 755 turbines installed, down from 2009’s nine-month period, when GE had 1,556 turbines installed.

Expecting strong demand from European clients in 2010 and 2011, Vestas Wind Systems A/S had increased its wind turbine manufacturing capacity. However, as the European market fell short of its expectations, Vestas cut 3,000 jobs, mostly in Europe, to adjust the balance. Vestas had only two turbines installed in the U.S. in the first nine months of 2010, compared to the 2009 period, when 409 Vestas turbines were installed. Turbine shipments into the global market were down 43% in the first nine months of 2010, falling to 1,180 actual turbine shipments. Revenue fell 19%, to $4.58 billion, and earnings fell into the negative for the first nine months of 2010. Despite a lower performance in the first three quarters, the company has said it remains optimistic about the future. Orders have increased 175% from the 2009 nine-month period, growing from $2.87 billion a year earlier to $7.89 billion as of Sept. 30.

India-based wind turbine manufacturer Suzlon Energy Ltd. continues to be an up-and-coming player in the global market. Suzlon has most of its manufacturing capacity in China and India, which enables the firm to reap the benefits of lower production costs. The first nine months of 2010 proved to be a slower period in terms of installing Suzlon turbines in the U.S., with 64, totaling 132 MW, installed, compared to the corresponding period in 2009, when 189 Suzlon turbines, totaling 397 MW, were installed.

Suzlon total revenues fell 29%, from $3.8 billion in the first nine months of 2009 to $2.7 billion for the 2010 period. On a segment level, the wind turbine generator business holds the most weight, accounting for 98% of the revenue stream for the 2010 nine-month period.

Mitsubishi Heavy Industries Ltd. experienced a decrease in U.S. turbine installations in the 2010 nine-month period, with 147 actual turbine installations totaling 265 MW, compared to 231 installation totaling 554 MW in the same period of 2009. MHI’s power systems segment performed well in the 2010 period, with increases in operating income, sales and orders.  Operating income increased 72%, while sales were up slightly. Orders increased 43%, from $6.28 billion for the first nine months of 2009 to $9 billion for the same period of 2010.