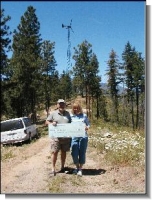 The second home wind turbine in the Chelan County Public Utility District (PUD) went up in May, as part of a partnership between the PUD’s green power program and a newly formed wind cooperative that’s helping pare down turbine installation costs for homeowners.

Chelan County, Washington – September 15, 2003 [SolarAccess.com] Don and Bev Grim, (Shown in the photo with the Web site story) hosted a barbeque at their home in Peshastin, Washington to show off their new 10 kW Bergey turbine, which brought a state representative and county commissioners out for a look. Brooks Solar, of Chelan provided the equipment and installation. All power produced by the Grims’ wind system is fed into the PUD’s grid. The Grims are participants in a recently formed Chelan County PUD program that promotes small-scale renewable energy installations by paying a premium rate of return for the electricity they generate. Nearly 700 customers currently support the SNAP program. The program, called Sustainable Natural Alternative Power (SNAP), paid producers US$1.17 per kWh last year and already boasts one successful small wind turbine. Charlie and June Nichols became the first wind power suppliers to the SNAP program when they installed similar equipment near their rural home about 15 miles south of Wenatchee on May 1, 2002. As of March 27, the Nichols’ turbine had generated 7,222 kWh of electricity, earning them a SNAP payment of $8,431 for 2002 (not an entire year). At that rate, the Nichols expect to recoup their $40,000 investment in three to five years. The SNAP program was launched in August 2001. It offers PUD customers the opportunity to support local distributed renewable projects through an optional payment on their bill. Residential customers can opt to pay $2.50, $5, or $7.50 a month, while business customers can choose $10, $25, or $50 per month. All funds earmarked for SNAP go directly to the local producers who supply power into the PUD’s electrical grid for use by local customers. The program is designed for small producers only, with maximum generation of 25 kW each The Grims also benefited from financial incentives provided by a start-up initiative called Our Wind Co-op, which pools private capital from individual investors and utilities’ green power programs to fund home-sized wind turbines in rural areas. The Grims’ turbine received $6,000 from the Bonneville Environmental Foundation, which collects green power premiums from several major Northwestern utilities. Heather Rhoads-Weaver, who as director of the nonprofit Northwest SEED has been instrumental in forming Our Wind Co-op, said the co-op plans to fund nine more turbines in the coming year. The Bonneville Environmental Foundation’s Rob Harmon said Our Wind Co-op will make sure that the good intentions of environmentally conscious electricity customers get invested in real clean-energy projects. “Many people and businesses in the Northwest express a desire to pay for the development of clean energy,” said Harmon, “but who’s going to produce the power? We say, why not farmers and homeowners like the Grims. Rural towns need the capital investment.” The Chelan PUD has developed a “starter kit” for other utilities interested in offering a SNAP program. The name and logo are registered trademarks, but are available for use by other entities, as long as they follow some basic guidelines. The starter kit includes SNAP supporter display materials, a producer brochure, a customer’s direct mail brochure, a copy of enabling legislation, an application for power producers, an electric rate schedule, interconnection standards, a power purchase and interconnection agreement, and other information. More information about SNAP, photos of installations, and the starter kit for other utilities interested in offering a SNAP program, are available at the PUD’s Web site listed below. This story courtesy of both the American Wind Energy Association (AWEA) Northwest SEED and the Interstate Renewable Energy Council (IREC).