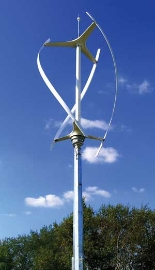 London, UK [RenewableEnergyWorld.com] The UK does well in the small wind turbine industry and is host to some genuine world leaders in the field. Indeed, with more than 15 manufacturers based in the UK alone, a wide variety of designs are available and some 10,000 micro and small wind turbines have been installed in the country since 2005. 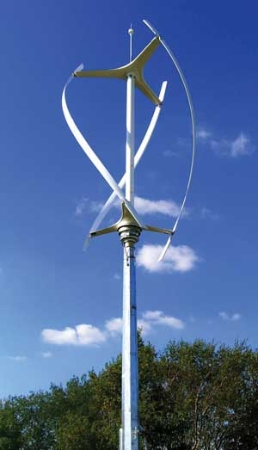 According to the British Wind Energy Association, annual production from the small and micro wind sector was estimated at 24.5 GWh in 2008, with 7.24 MW of new capacity installed during that year. This compares with the 7.11 MW installed in 2007; 2008 also saw total installed capacity hit 20 MW. The association estimates that if barriers to market growth are adequately addressed, by 2020 small and micro wind installations could be generating as much as 1.7 TWh annually from 1.3 GW of installed UK capacity. Larger small wind turbines are expected to provide the majority of this deployed capacity.

Each year there are new designs entering the market, with particular emphasis placed on improving efficiency, reducing noise and introducing additional safety elements. A key mark of the development of the sector came from a set of performance and safety standards for small wind turbines, introduced by the BWEA in 2008.

This technical standard for manufacturers of small wind turbines wishing to supply the UK market is designed to ensure that the turbine can withstand the structural loads imposed, that it has been tested in a full range of wind speeds, and that in general it meets the claims made for overall performance. This is particularly significant and came in the wake of exaggerated performance claims that left some consumers disappointed, leading to something of a backlash. It has been suggested that one notable consequence of this backlash has been the withdrawal of Windsave micro-wind turbines for sale from the home improvement chain B&Q.

A growing volume of comparative performance data from studies – such as those at Zeeland in the Netherlands, and closer to home, the Encraft Warwick Wind Trial report, published in January 2009 – is going some way to countering this perception.

Covering 168,950 hours of operation of 26 building-mounted micro-wind turbines from five manufacturers, the Encraft study apparently demonstrates that the national wind-speed database (NOABL), a UK government web tool often used to predict on-site wind resource, can systematically overstate wind speeds in urban areas by 40%–75%. The report also concludes that the operational energy generated by the installations is lower than that predicted, by applying manufacturers’ supplied power curves to measured wind speeds – though some power curves appear more accurate than others. Predictably, such studies tend to conclude that site selection is crucial to performance, and that the urban environment typically offers lower wind speeds. 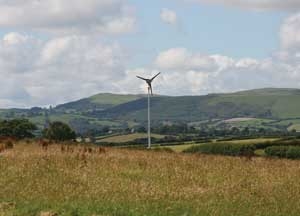 A Carbon Trust study, for instance, found that small wind turbines installed at 10% of households could provide up to 1.5 TWh per year (some 0.4% of total UK electricity consumption) but that the majority of potential is from small turbines in rural areas – four times as much as urban areas, irrespective of costs, and considerably more given economic drivers. The report states that, in theory, small wind systems could supply some 8% of UK electricity requirements.

Thus, while the need for further standards, more realistic performance expectations and more appropriate siting is clear, the huge potential of UK and export markets is equally evident.

There are a number of drivers expected to encourage future growth, including a doubling of financial support under the Renewables Obligation (RO), implementation of feed-in tariff-style policies, the streamlining of UK planning requirements, and a growing environmental awareness coupled with concerns of energy security of supply and volatile fossil fuel prices. Consequently, the BWEA estimates that more than 600,000 micro and small wind turbines could be installed in the UK by 2020, with significant growth anticipated following streamlining of the planning system through General Permitted Development Orders and the introduction of feed-in tariffs in 2010.

BWEA’s own figures show the UK as the world’s biggest exporter of turbines in the sub-50 kW division. As well as holding an 82% revenue share of the domestic market, itself the second largest behind the US, UK manufacturers also managed to double export revenues in 2008, selling 4.7 MW, half the total manufactured, overseas.

It is anticipated that more turbines will be exported by UK manufacturers than will be deployed throughout the UK market during 2009, aided by the weakness of the pound and growth in global demand.

BWEA estimates that from the current 1880, by 2020 the sector could be employing 5800 people in the UK. These latest figures follow on from the September 2008 BWEA Small Systems Report, its first, which pointed to spectacular sector growth of 80%.

Indeed, in May 2009, a global study released by the American Wind Energy Association (AWEA), flagged up significant international demand for small wind technology. The study’s author Ron Stimmel of AWEA, said: ‘The UK currently exports more small wind systems than any other country in the world and has a great potential domestic market. In the US, the world’s largest small-wind market, the federal government recently enacted a long-term financial incentive for small wind turbine consumers that could bring a 30-fold growth to the US industry in as little as five years. With the right policies, the UK market could see similar growth.’

Leonard McGrill, chairman of Iskra, now Evance Wind Turbines, observed: ‘We hope that unlike big wind, the UK’s early technical lead will result in sustainable long-term success, and the government should further expand support to this potentially very big industry.’

The two main designs are horizontal and vertical axis wind turbines, and both may operate on or off-grid. One of the larger horizontal axis small wind turbines comes from Proven Energy, a Scottish-based company which manufactures 2.5 kW, 6 kW and 15 kW machines. More than 2000 of its turbines are in service worldwide, Proven says, including two 6 kW machines at Liverpool’s John Lennon Airport. Perhaps surprisingly, in 2009 the Royal Society for the Protection of Birds (RSPB) installed a 15 kW Proven turbine at its Rainham Marshes visitor centre in Purfleet, Essex. Meanwhile, a 2.5 kW machine was temporarily installed at Fairmont Hotel, St Andrews, to mark Earth Hour. 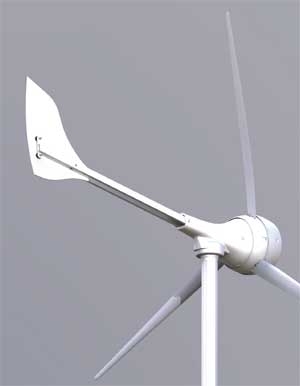 Another of the larger horizontal axis devices is the Evance Iskra R9000 5 kW machine, launched in April 2009 by the Loughborough-based company. Designed for schools, farms, rural homes and light commercial applications, Evance has appointed four new re-sellers to market the machine, which has a 5.4 metre rotor. The new turbine is an evolution of its AT5-1 and has been developed over two years, the company says, adding that it has increased efficiency by 4%, increasing energy yield from 8700 kWh to over 9000 kWh on a site with an annual average wind speed of 5 m/s, and generates power from 5.6 mph (2.5 m/s).

Ampair, the Berkshire-based company, also launched a new turbine in spring 2009, with a 6 kW, 5.5 metre diameter rotor machine. More than 20,000 Ampair turbines are currently installed worldwide and the move marks a departure for the UK’s oldest turbine manufacturer, which previously only produced micro wind turbines of 100 W, 300 W, and 600 W rated output. However, the company says the new Ampair 6000 fits neatly into a slot in the market which it has been working to fill for several years in order to satisfy rising demand.

Heading into the micro turbine sector comes Scottish company Renewable Devices, and its Swift machine. In March 2009, the company announced that had installed one of its 1.5 kW machines on top of the Auckland Sky Tower, in New Zealand. This followed a similar installation on the 41-storey-high Corning Tower at the Empire State Plaza in Albany, New York state. The company also completed the largest micro wind installation in the UK, a 46 turbine installation at Liverpool’s Vesty Bootle Business Park, in late 2008.

A 1 kW wind turbine is produced by Stratford-upon-Avon-based FuturEnergy and smaller still come devices such as the 500 W StealthGen Wind Generator by Eclectic Energy Ltd, the Zephyr Air Dolphin, the Marlec Rutland series and the Windsave Ltd WS100. As previously mentioned, this latter company struck a deal with DIY suppliers B&Q in October 2006 to make the turbine available across its 330 stores throughout the UK. However, the product was subsequently withdrawn.

While some of these small companies will do their own installation there are around 100 specialist installers in the UK.

Rather more unusual to behold, a number of vertical axis machines have been launched in the UK market. One of the higher profile manufacturers is Bristol-based Quiet Revolution Ltd, a division of design house XCO2. This 6 kW vertical-axis machine features three helical rotor blades, a design which they claim is aimed at optimizing energy capture in turbulent winds and eliminating vibrations. At 5 metres high and slightly over 3 metres in diameter, the rotor of the QR5 machine is, according to the designers, easy to integrate with existing masts and buildings in the built environment. In 2008 the company secured a capital injection to the tune of £7 million (€7.9 million), with the bulk of the cash coming from Germany’s RWE Innogy GmbH. RWE invested £6 million (€6.8 million) and a further £1 million (€1.13 million) has come from private investors, Quiet Revolution says.

Crispin Leick, head of the RWE Innogy Ventures Division, said: ‘The purpose of our involvement is to take this promising technology towards mass production, so that it will become commercially usable.’ 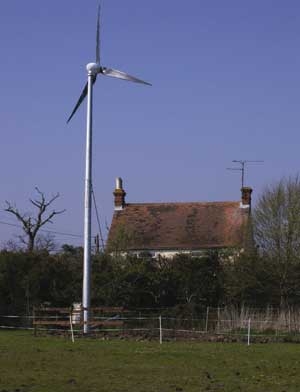 Other vertical axis machines include the Skyrota, seen recently installed at a housing development at Long Sutton, Lincolnshire. This 6 kW turbine is made by the Limavady Gear Company in Northern Ireland.

With a wealth of manufacturing expertise in the UK and a growing wealth of data proving the effectiveness of small and micro wind turbines – when appropriately sited – the prospects for the sector appear promising. Indeed, the attractiveness of the small wind turbine market is such that some of the larger, well-established manufacturers are believed to be considering a return to smaller turbines of up to 50 kW, as well as giant multi-MW machines.

However, in the UK a move to market devices that have manifestly failed to deliver on promised performance, has dealt a blow to the prospects for growth offered by wide-spread consumer engagement. It has even been suggested this has set the industry back a decade. As a result, while there are certainly many successful designs available in the small and micro wind sector, there remains the crucial requirement for a full and coherent system of standards and certification to ensure that consumers have confidence in their investment.

That said, the UK is now recognized as a leading force in the development of small wind industrial standards. UK manufacturers, currently certifying products to MCS and BWEA standards, will become the world’s first manufacturers to complete robust certification processes. So, while it is fair to say that the UK’s small wind sector has incurred some setbacks, it is perhaps because it is ahead of the international curve.