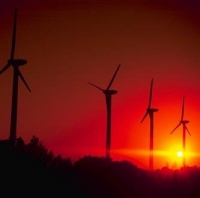 Washington, D.C. United States [RenewableEnergyWorld.com] On July 9, the U.S. Treasury Department and U.S. Department of Energy released the guidance for how wind farm developers can access cash grants in lieu of the investment tax credit. The grants, which were part of the American Reinvestment and Recovery Act (ARRA, also known as the stimulus bill), are expected to help get wind projects built while capital markets remain difficult. The program began accepting applications at the end of July.

Although it is still too early to get an accurate read on how the Treasury grant program and the other stimulus bill provision will affect the wind industry, it is clear that the law is keeping the industry alive during difficult economic times.

Provisions in ARRA that benefit new wind power project development include an extension of bonus depreciation through 2009, the three-year extension of the production tax credit (PTC) (2010-2012), and the ability to take an up-front 30% investment tax credit (ITC) instead of the PTC and, if desired, take an equivalent cash grant from Treasury in lieu of the ITC.

The grants are designed to temporarily replace tax credits which have been major factors in the continued growth in wind and other renewable energy projects. Third-party investors with a large tax appetite or developers with access to large balance sheets were a key part of wind project financing. Such investors normally partner with developers who have limited tax liability themselves and help them monetize the tax credit.

However, due to the recession, there has been limited tax equity available from investors and developers with large balance sheets, making it difficult to monetize tax credits and thereby rendering tax-based incentives such as the PTC almost useless as an investment incentive. As revenues for investors and developers have declined with the recession, so has their tax liability. The availability of the temporary Treasury grant program allows projects to continue to use the value of the incentive by removing the link between the incentive and tax liability.

AWEA reported in late July that the U.S. wind energy industry installed 1,210 MW of new power generating capacity in the second quarter, bringing the total added this year to just over 4,000 MW. In addition to what has been commissioned this year, over 5,500 MW have been reported as under construction for completion later this year or early next year. New wind project announcements have also been picking up. In addition to what is under construction, at least another 5,000 MW of new projects have been announced by project development companies. Most of the projects either completed this year or announced for the next few years are driven by or at least are benefitting from ARRA provisions.

The relationship between the newly implemented policies and robust project activity is evidenced both in the numbers and through informal feedback from developers. Just since the July 9 announcement, 200 MW have been completed, construction has started on over 400 MW, financing has closed on 100 MW, and another 550 MW have been announced. These projects would equate to $2.5 billion in new investment.

Moreover, several large wind power project development companies said that their entire 2009 portfolios would have been reassessed had ARRA not passed. According to Horizon Wind Energy, owned by EDP Renewables, the passage of the stimulus bill allowed the company to accelerate its 2009 projects currently under construction, totaling 501 MW. In addition, Horizon has advanced the construction schedule for its 99-MW Meadow Lake II Wind Farm in Indiana. Horizon also completed construction and has started operations of its 101-MW Rail Splitter Wind Farm in Illinois and 97-MW Wheat Field Wind Farm in Oregon. All together, these projects, which total 798 MW, are driving creation of over 600 direct construction jobs and represents an investment of over $1.5 billion.

Developer E.On also said that all of its 2009 projects are moving forward because of the stimulus bill. Including completed and under construction projects, E.On has a portfolio for 2009 of 878 MW, representing an investment of $1.75 billion and over 600 direct construction jobs in Pennsylvania and Texas.

Iberdrola Renewables, meanwhile, stated that it plans to bring online around 850 MW of wind energy installations in 2009, a project pipeline that could be eligible for $400 million to $500 million in Treasury aid over the coming months. Several projects were singled out as being driven by ARRA provisions, including the bonus depreciation extension piece of the legislation as well as the provision that allows developers to take an ITC in the form of a Treasury grant.

Wind Capital Group started construction early on what will be the largest wind farm in the state of Missouri, the 150-MW Lost Creek Wind Farm, the power from which will go to Associated Electric Cooperative, Inc. The electric transformers going into the project’s 100 GE Energy 1.5-MW turbines will be built by United Auto Worker employees at the ABB manufacturing plant in Jefferson City.

Duke Energy responded that the 42-MW Silver Sage project was positively impacted by the ARRA. The extension of 50% bonus depreciation into 2009 allowed the company to proceed with the project. The wind farm features 20 2.1-MW Suzlon turbines.

In spite of the positive news that the stimulus bill has brought to the wind industry, most see it as a vital stop-gap but not a long-term solution. Manufacturers in particular are still looking for the longer-term market signals that will encourage them to make manufacturing investments. While AWEA manufacturing members are reporting a reduced number of orders for wind turbines and their components, investment in new manufacturing facilities has continued, albeit at a slower pace, with 20 manufacturing facilities brought online, announced or expanded in the first six months of 2009. More specifically, a recent announcement by Nordex that it would start construction on its manufacturing plant in Jonesboro, Ark., was a breath of fresh air for the industry; nevertheless, the plants of other manufacturers continue to idle or even downsize.

“The numbers are in, and while they show the industry has been swimming upstream, adding some 4,000 MW over the past six months, the fact is that we could be delivering so much more,” said AWEA CEO Denise Bode. “Our challenge now is to seize the historic opportunity before us to unleash this entrepreneurial force and build up an entire new industry here in the U.S. that will create jobs, avoid carbon, and strengthen our energy security.”

In order to send the right long-term market signals, AWEA is urging Congress to pass a national Renewable Electricity Standard (RES) with strong early targets. As the Department of Energy 2008 “20% Wind by 2030” report shows, wind power is ready to make a meaningful commitment to the country’s need for carbon-free electricity.

The industry is still ahead of the curve sketched out in the report for the necessary deployment pace to achieve 20% wind power penetration, but as the early part of this decade showed, project development activity can be very volatile depending on the policies that are in place. AWEA applauds Congress for its immediate support in the stimulus bill and urges it to look ahead and pass a policy that will help the industry grow for the mid- and long-term as well.

Kathy Belyeu is manager of industry information at AWEA.

This article first appeared in the August 2009 issue of Windletter and was republished with permission from the American Wind Energy Association (AWEA).