Munich, Germany — A key development in linking the two offshore wind farms Nordsee Ost and Meerwind to the German mainland has been completed according to Siemens, which says it has installed the HelWin1 offshore platform in the North Sea.

Using Siemens HVDC technology, the HelWin1 will transform the alternating current generated by the wind turbines into direct current for transmission onto land. The link is due to be energised next year in 2014 and will enable the power to be transferred to the land-based station located northwest of Hamburg in Büttel, where electricity will be converted back into AC for the grid.

Network operator TenneT contracted a consortium consisting of Siemens and the Italian cable specialist Prysmian for the HelWin1 connection in 2010. The consortium is implementing a total of four North Sea grid connection projects for TenneT: HelWin1 and 2 off of Helgoland, BorWin2 off Borkum and SylWin1 off of Sylt. 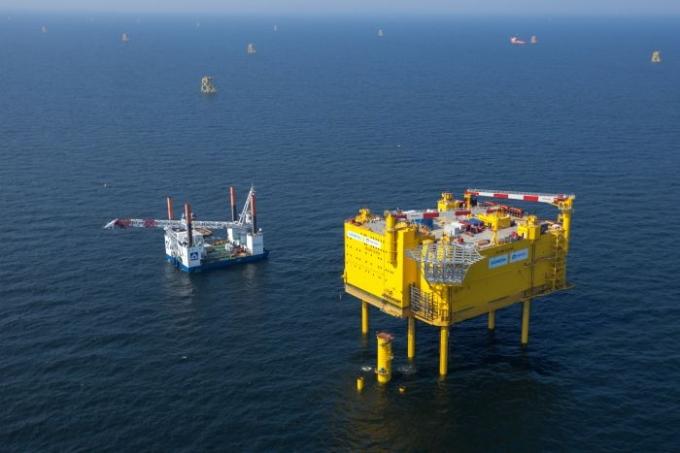 “Installation of the platform for HelWin1 constitutes reaching a key milestone in our series of grid connection projects. The transmission capacity of our projects involves a total of 6.2 GW of electric power from renewable sources,” remarked Lex Hartman, member of TenneT management board.

The HelWin1 platform was anchored at its final position northwest of the island of Helgoland in 23-metre-deep waters. Ten steel pilings up to 3.2 metres in diameter and up to 100 metres long were anchored in the seabed for attachment of the structure. The platform is installed 22 metres above sea level to protect it against wave impacts, having been designed for decades of operation in the North Sea.

Fabricated by Nordic Yards at Wismar under contract by Siemens, at 12,000 tons the HelWin1 platform has seven decks with a total of 24 berths.

Up to 100 employees will be active on the platform for the subsequent project phase in the North Sea, for example connecting the two Prysmian subsea cables, each with a length of 130 km.  The cable route covers 85 km at sea and 45 km over land.

Transmission will take place at 250 kV DC and the HelWin1 HVDC platform has a capacity of 576 MW. Total transmission losses are less than 4 percent, Siemens says.

Final commissioning of HelWin1 is scheduled for the second half of 2014.