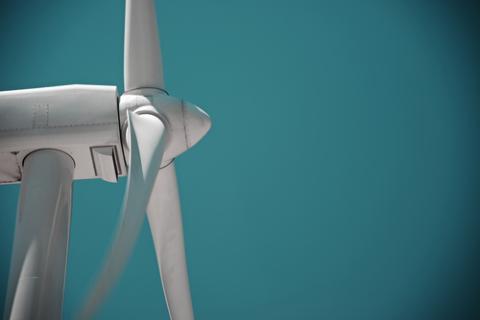 NEW YORK — Wind power in the U.S. is on a respirator. The $14 billion industry, the world’s second-largest buyer of wind turbines, is reeling from a double blow — cheap natural gas unleashed by the hydraulic fracturing revolution and the death last year of federal subsidies that made wind the most competitive of all renewable energy sources in the U.S.

Without restoration of subsidies, worth $23 per megawatt hour to turbine owners, the industry may not recover, and the U.S. may lose ground in its race to reduce dependence on the fossil fuels driving global warming, say wind-power advocates.

They place the subsidy argument in the context of fairness, pointing out that wind’s chief fossil-fuel rival, the gas industry, is aided by the ability to form master limited partnerships that allow pipeline operators to avoid paying income tax. This helps drive down the cost of natural gas.

“If gas prices weren’t so cheap, then wind might be able to compete on its own,” said South Dakota’s Republican Governor Dennis Daugaard.

The shift in fortunes for the two fuels arrives at the moment when wind was beginning to rival gas on price alone, according to data compiled by Bloomberg. That means the industry’s future will be shaped by the debate over what counts as support from the government and when, or if, Congress moves to rethink the credit.

“Cheap gas has definitely made it harder to compete,” said David Crane, chief executive officer of NRG Energy Inc., which builds both gas and renewable power plants. He said that with the subsidy, companies were able to propose wind projects “below the price of gas.”

Both wind and gas cost about $84 a megawatt hour to install worldwide, excluding subsidies, according to Bloomberg New Energy Finance. That’s 3 percent higher than a coal-fired power plant costs and about half that of nuclear reactors.

“We’re planning for a world that’s unsubsidized,” Immelt said at the conference. “Renewables have to find a way to get to the grid unsubsidized.”

Governor Daugaard joined Senator Ron Wyden, a Democrat from Oregon and chairman of the Senate Finance Committee, in pushing to extend the Production Tax Credit, which expired in December and is part of a package of 50 lapsed tax breaks the committee agreed on April 4 to extend.

The credit appeals to Democrats and Republicans alike in places that have strong wind resources such as South Dakota and Texas, as well as those with turbine and blade factories, like Kansas and Colorado. Still, the Republican-led House of Representatives may not support efforts to extend the tax credits before the November election, according to the American Wind Energy Association.

“It awaits a vehicle that can pass both the House and Senate,” Peter Kelley, a spokesman for the Washington-based industry group, said on a March 31 conference call.

America’s Natural Gas Alliance, which represents independent gas producers in Washington, has no position on the tax credits for wind, said Dan Whitten, a spokesman. The group also welcomes proposals to expand master limited partnerships to additional energy sources such as wind.

Nowhere is the economic debate about wind versus gas more finely balanced than in the U.S. While North America ranks behind China in terms of total installations, the price of gas and structure of support for the industries has made it among the most competitive markets in the world.

The best wind farms in the breeziest areas such as south Texas can be built for $60 a megawatt-hour, below the $65 price of a high-efficiency gas turbine, according to New Energy Finance.

Behind those headline figures are hundreds of variables that determine whether a utility picks wind or gas. The best wind farms may operate 45 percent of the time, while ordinary ones work less than a third of the day. The tax credit often is the decisive factor in determining whether to build a wind farm.

“Without the Production Tax Credit, we don’t expect wind to be at cost parity with gas” in most places in the U.S., said Stephen Munro, an analyst at New Energy Finance.

Power technologies don’t compete on price alone. Most states require utilities to supply an increasing amount of their electricity from renewables.

And most utility executives have scars from swings in fossil fuel costs. A deep freeze in New England increased the cash price for gas near Boston tenfold to more than $76 per MMBtu in January.

“The polar vortex showed us the problem with relying too much on gas,” Tom Kuhn, president of the Edison Electric Institute, said in an interview.

Munro of New Energy Finance said, “wind has none of gas’s price drama. It’s visible for 20-year or 25-year contracts. Financial hedges on gas prices typically go out no more than five years.”

Gas-fired generators have the advantage of the ability to scale up or down their output hour by hour. That gives utilities flexibility to integrate more variable supplies from wind and solar farms into the electric grid. It makes the two fuels symbiotic “frenemies with benefits,” supporting each other’s development, said Dexter Gauntlett, an analyst at Navigant Consulting in Vancouver, Washington.

Three variables — the individual renewable needs of each state, the on-again-off-again tax credits awarded by Congress and the price of natural gas relative to wind — have made forecasting turbine installations difficult.

“The dynamic between these three drivers has been a roller coaster over the past five years,” Gauntlett said.

With the outlook for the tax credit uncertain, utilities are refocusing on the price of the fuels. Hydraulic fracturing technology, otherwise known as fracking, makes gas wells profitable at $4.50 per MMBtu, according to Samantha Dart, an analyst at Goldman Sachs Group Inc.

That should keep gas prices within a range of $4 to $6 for at least a few years, she said in a note to clients on Feb. 3.

“Power-purchase agreements in the U.S. are under severe pricing pressure because of the shale gas boom,” said Jurgen Zeschky, CEO of Nordex SE, a German wind-turbine maker. “That’s putting pressure on prices for wind power and makes investments very difficult.”