LONDON — One of the few highlights in an otherwise relatively muted 2013 renewable energy market has been offshore wind in the UK. Furthermore, 2014 is shaping up to be a pivotal year for the sector.

Indeed, a number of new reports have suggested that the UK will be one of the big winners as offshore wind bulks up.

Just three G-20 countries, among them the UK, saw an increase in clean energy investment in 2013.  The U.K. saw 13 percent growth, to $12.4 billion, much of which was based on the strength of offshore projects and increased activity in public market financing, according to the 2013 edition of the Who’s Winning the Clean Energy Race?

The document highlights what it describes as the U.K.’s “abundant offshore wind resources and on-going commitment to develop the sector” as factors that have “helped to bolster clean energy investment, enabling the U.K. to jump from seventh to fourth among G20 countries.”

Bolstering the economic case for offshore wind further, analysis from the Offshore Renewable Energy Catapult, a government-backed body to support accelerated economic development for offshore, suggests the U.K. economy could gain by as much as £6.7 billion (US$11 billion) per year by maximizing offshore wind.

Under an ‘accelerated growth’ path, which drives cost reduction and quality improvements through innovation and investment, some 15 GW of offshore wind capacity would be installed by 2020 generating 34,000 direct jobs, an increase of 25,500 on 2013 levels and 150,000 jobs in total in the wider UK economy.

Even at the lower-end scenario, which foresees 8 GW installed by 2020, added gross economic value reaches £2.3 billion in 2020 and more than 11,000 additional direct jobs.

Alongside manufacture and deployment of turbines, foundations, cabling and substations, expertise in installation, operations and maintenance is perceived as the biggest long-term opportunity for the UK by providing an exportable service industry, similar to that achieved by the oil and gas industry.

Despite the apparent economic advantages in developing offshore wind there is, however, clear evidence that significant challenges remain. In its latest Global Wind Report – Annual Market Update the Global Wind Energy Council (GWEC) acknowledges that “the apparent cost gap relative to more conventional power (including onshore wind) remains substantial, and we are at least a decade away from wholesale grid parity.”

But beyond the technical and economic issues associated with installing, connecting and operating thousands of individual offshore wind turbines, policy uncertainty is perhaps the key obstacle for developers.

A series of measures, chiefly passage of a new Energy Act last December and the Energy Market Review (EMR), have beset the policy landscape.

With the EMR has come reform of the Renewables Obligation (RO) renewable energy support mechanism into a Contract for Differences (CfD) scheme in which support for renewables comes in the form of a guaranteed ‘top-up’ on a reference electricity market price.

Undoubtedly policy uncertainty has been a factor in an alarming number of recent announcements abandoning or downsizing offshore wind proposals, but the range of technical, geological and environmental influences that have put paid to offshore wind proposals admirably illustrates the scale of the challenge for offshore projects to get over the line.

For example, in December 2013 ScottishPower Renewables confirmed that it will not be taking forward the Argyll Array project, citing technical ground conditions.

Jonathan Cole, Head of Offshore Wind at ScottishPower Renewables, said: “The rate of progress in development of foundation and installation technology has been slower than anticipated. The current outlook for offshore wind deployment in the UK suggests this will not significantly improve in the short term. This supports the view that it could take 10-15 years for the required technology improvements to be available for this project.”

In January RWE npower Renewables revealed that it was halving the capacity of its Triton Knoll project of the U.K.’s east coast. In a statement npower said work on the site design resulted in a decision to progress the development with a reduced capacity, ranging between 600 and 900 MW, rather than the permitted capacity of 1200 MW. The development came hot on the heels of another npower project announcement, the November news that the 1200-MW Atlantic Array to be sited off the U.K.’s west coast, was being effectively abandoned.

Part of the U.K.’s Round 3 of offshore wind development, in the Bristol Channel Zone, npower said it identified a number of site-specific technical issues that made the project unfeasible.

And the bad news keeps coming. In February 2014, the consortium behind London Array announced it will not proceed with the development of Phase 2 of the offshore wind farm, keeping capacity at the currently operating 630 MW — still the world’s largest offshore wind project to date. Phase 2 had the potential to provide a further 370 MW of capacity. The decision apparently follows a review by the consortium members of their respective portfolios, the technical challenges and the environmental uncertainties surrounding the site. 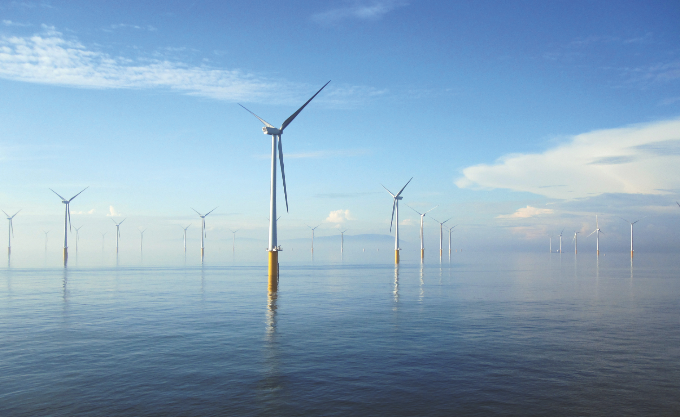 And in late March, in perhaps the most significant development, SSE, another of the UK’s ‘Big Six’ energy utilities announced that it is not proceeding with the bulk of its offshore wind portfolio.

The company said that following a strategic review of its offshore wind development portfolio, it will focus its efforts and resources on progressing the 750-MW Beatrice project, though a final investment decision is not due until early 2016.

As for its other projects, it is not proceeding with the 340-MW Galloper project in a 50:50 partnership with RWE or the 690-MW Islay proposal, and for its Round 3 interests — the 3.5-GW SeaGreen and 7.2-GW Forewind, SSE has decided that it will not proceed further than securing necessary construction consents.

Commenting on the decision Jim Smith, SSE’s managing director of Generation Development, said: “In offshore wind farm development, there are two major, related hurdles that projects currently have to overcome.  The first is the Levy Control Framework, which has the reasonable objective of controlling costs to customers from government energy policies — but that also means there is limited support for offshore wind.  The second is cost — the future of offshore wind farm development depends on a sustainable and lower cost supply chain.”

McCaffery added: “If we could rely on more certainty and less risk, firm commitment to the huge financial investments involved would secure all the economic benefits of energy independence in a shorter timescale.”

A Fair Wind for Offshore

Of course, technology, economics and policy aside, any reasonable observer would suggest that, given the scale of the UK’s ambition for offshore wind, inevitably some projects will fall by the wayside as a result of numerous possible technical or financial reasons. And overall, the UK still has well over 3.5 GW of offshore capacity installed across more than 20 projects, there are a further five projects under construction and nine with planning consent with a further pipeline of close to 15 GW.

According to the latest figures published by the U.K. government, for the last quarter of 2013 offshore wind generation had increased by 42 percent in comparison with the same period in 2012.

This continued expansion into offshore waters has been driven by a number of policy and private development initiatives as well as significant investments.

The Strategy describes offshore wind as “a core and cost-effective part of the U.K.’s long-term electricity mix” and sets out a number of measures to be delivered by government and industry that “will build a competitive and innovative U.K. supply chain.”

And in March, Vince Cable, Secretary of State for Business, Innovation and Skills, formally opened the headquarters of the Offshore Renewable Energy Catapult, an organization set up by the Technology Strategy Board to drive innovation and deliver affordable offshore renewable energy and which in April merged with the National Renewable Energy Centre (Narec).

Commenting, Iain Gray, the Technology Strategy Board chief executive, said: “Combining Narec’s outstanding research, testing and development facilities with the Catapult’s leadership and expertise will create a single, powerful champion for the development of the UK’s offshore renewable energy industries.”

And despite the policy uncertainty, perhaps these efforts are starting to pay off too. As the OREC/Narec deal was being revealed, Siemens announced that it is to build a blade manufacturing facility on the UK’s east coast. The company is investing more than EUR €190 million (US$262 million) in blade production facilities for its 6-MW called offshore wind turbines, with a new logistics and service center in Green Port Hull.

Together with its partner Associated British Ports (ABP) a total of EUR €371 million (US$512.7 million) will be invested at the project sites. Green Port Hull is scheduled to take up operations at the beginning of 2016, rotor production is scheduled to begin in 2016 and full capacity reached by mid-2017.

Michael Suess, Siemens’ energy sector CEO said: “Our decision to construct a production facility for offshore wind turbines in England is part of our global strategy: we invest in markets with reliable conditions that can ensure that factories can work to capacity. The British energy policy creates a favorable framework for the expansion of offshore wind energy. In particular, it recognizes the potential of offshore wind energy within the overall portfolio of energy production.”

Andrew Mill, outgoing chief executive of Narec commented: “Having one of Europe’s leading wind turbine manufacturers invest in the UK market will have a huge impact on, and help to strengthen and develop, a home-grown supply chain enabling the industry to reduce costs and achieve its offshore wind goals.

There is other evidence of the health of the U.K.’s offshore wind sector. In March Moray Offshore Renewables Ltd was awarded Scottish government consent for the construction and operation of 1.1 GW of offshore wind generation in the Outer Moray Firth, simultaneously SSE’s Beatrice Offshore Windfarm Ltd (BOWL), was granted consent by Marine Scotland for the 750-MW Beatrice project, also situated in the Outer Moray Firth.

In December last year final planning permission for a major offshore wind industrial base on the east coast of England was announced by the government. The £450 million [US 756 million] Able Marine Energy Park covers nearly 800 acres of the south bank of the Humber.

And in January the first power was generated by DONG’s 389-MW West of Duddon Sands project being developed together with ScottishPower.

The project utilizes a new £50 million (US$84 million) offshore wind terminal at Belfast Harbour, the first purpose-built offshore wind installation and pre-assembly harbour in the UK and Ireland.

Last year DONG Energy also acquired ownership of the 580-MW Race Bank offshore project in the Greater Wash from Centrica at a cost of £50 million (US$84 million).

Meanwhile, the U.K.’s state-backed Green Investment Bank (GIB) announced two investments in the U.K. offshore wind sector at the end of March. Alongside Japan’s Marubeni Corporation, the GIB will jointly purchase a 50 percent stake in the Westermost Rough offshore wind farm — set to use the new Siemens 6-MW machine — from DONG Energy.

GIB has also agreed to acquire a 10 percent stake in the Gwynt y Môr offshore wind farm, from RWE Innogy. The purchase price is £220 million, [US $370 million] which together with the Westermost Rough investment sees £461 million [US$ 774 million] going into offshore wind from the bank in the two deals.

With much of the policy turbulence set for final resolution this year, the UK’s offshore wind sector has its fingers crossed for an extended period of policy stability in which the major investment required in the supply chain and installation and operational infrastructure can manifest itself. However, with a general election due next year and a possible change of government with it, there are no guarantees.