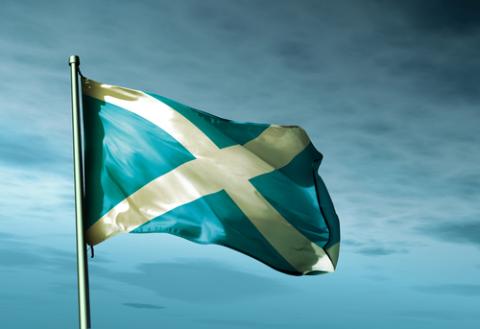 LONDON — A vote for independence in Scotland may halt work on renewable power projects that support 14 billion pounds ($23 billion) of investment and 12,000 jobs by raising questions about how developers would get subsidies, an energy supplier said.

Green Energy Plc, which sells electricity to almost 20,000 customers in the U.K., said breaking up the union between England and Scotland in a referendum on Sept. 18 would force the two countries to negotiate how to divide payment for electricity.

Currently, Scottish projects get support though a nationwide program known as the renewables obligation, which may have no mandate north of the border if the two countries were split. Scotland exports as much as a quarter of its electricity and has about 43 percent of the U.K.’s wind power capacity. About 13 gigawatts of power projects are on the drawing board currently in Scotland, about 15 percent of total U.K. capacity.

“Projects in the pipeline that are planned in Scotland could get canceled because who is going to pay?” Doug Stewart, chief executive officer of Green Energy, said in an interview in London. “At the moment, we have the Department of Energy and Climate Change and Ofgem who rule over subsidies, and they are U.K. bodies. If they didn’t have any jurisdiction in Scotland, how do those subsidies get paid for?”

The comments mark a rare intervention by renewable energy executives in the debate over Scottish independence, which most companies have avoided. Bigger utilities such as SSE Plc and Scottish Renewables declined to comment. EON SE and Scottish Power Ltd. said they await a decision from Scottish voters.

“A vote for independence would introduce regulatory uncertainty in Scotland,” said Kieron Stopforth, a London-based analyst at Bloomberg New Energy Finance. It would likely halt project developers from making final investment decisions until incentives were clarified, he said, and that would only happen after negotiations between Westminster and the Scottish government conclude. That will take “at least” several months.

Scottish Renewables, an industry group that represents the biggest utilities developers and banks working in the industry, also declined to comment.

With expanses of windy highlands distant from population centers, Scotland has become a center of the U.K.’s wind energy industry. The government both north of the border and in London is encouraging turbine developments there both onshore and offshore.

Of the 34 billion pounds of investment planned in large-scale renewable power projects from January 2012 to February 2014, about 14 billion of that was to be sited in Scotland, according to data from the U.K. Department of Energy and Climate Change. It estimates the industry supports about 12,000 jobs.

Those projects get funded through subsidies run by the government in London. Of the 2 billion pounds of support paid through the Renewables Obligation in the fiscal year ended in 2013, Scotland received 560 million pounds. That represents as much as 28 percent of the total U.K. funding. Scotland itself accounts for about 10 percent of electricity sales in the U.K., according to government estimates.

Renewable energy supplies almost half of Scotland’s electricity, and the government is targeting for that level to reach 100 percent by 2020. About 34 percent of the U.K.’s renewable electricity capacity was located in Scotland at the end of 2013.

Stewart said Scottish First Minister Alex Salmond has yet to answer how the power market would be split up in the event voters back the referendum to break away from the rest of the U.K.

“Are we going to be buying on- and offshore-wind through Scotland with a pipeline straight through to the U.K.? Is Alex Salmond going to tax it?” said Stewart. “The whole thing is a risk.”