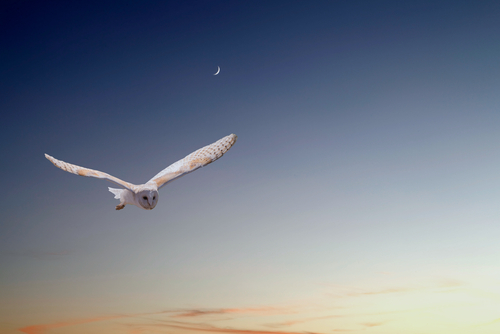 BERLIN — Scientists seeking to make a quieter wind turbine are mimicking owl wings after uncovering the secret of the bird’s ability to silently descend on its prey.

Researchers examining owl feathers found downy microscopic coverings and a porous elastic fringe on the trailing edge that scatters sound without affecting aerodynamics, the University of Cambridge said Monday. They mimicked the structure with 3D- printed plastic that can be applied to wind turbines, plane propellers or even computer fans to muffle their noise.

“Many owls, primarily large owls like barn owls or great gray owls, can hunt by stealth, swooping down and capturing their prey undetected,” said Cambridge’s Nigel Peake, who led the study. “While we’ve known this for centuries, what hasn’t been known is how or why owls are able to fly in silence.”

Wind tunnel tests on a turbine using the material produced 10 decibels less noise than without, the university said in a statement. That may help wind-power generators to increase their electricity output as it would allow them to run turbines at faster speeds without worrying about increasing noise levels.

The researchers are in talks with Siemens AG to test the coating on one of its turbines, the university said. Siemens wasn’t immediately able to comment when contacted by e-mail.

Wind farm developers are facing pressure to reduce noise from construction and operation. In the North Sea, developers including EON SE and RWE AG are trying to cut noise from driving turbines into the seabed after conservation groups complained that it damaged the sonar-like hearing of porpoises.

Peake and scientists at Virginia Tech, Lehigh University and Florida Atlantic University carried out the research, which was funded by the U.S. Office of Naval Research and the U.S. National Science Foundation, according to the statement.

“No other bird has this sort of intricate wing structure,” Peake said.