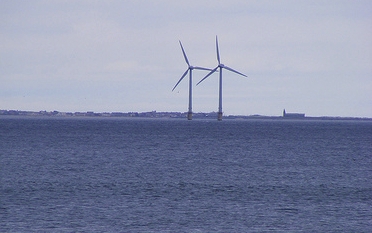 The German electricity company has spent about 1 billion euros ($1.26 billion) on a wind park in the North Sea that can’t start production because the local grid operator hasn’t built the connection to the 48 windmills. The hold-ups jeopardize further investment in wind power, the mainstay of RWE’s plan to more than double the proportion of power it gets from renewables by 2020, the company said.

From China to Texas, wind-farm developers have delayed or ditched plans for profitable power plants because they can’t get a grid connection. Authorities in China, the world’s biggest wind-energy market, are blaming the issue for the nation’s first slowdown in new construction in at least eight years.

“Offshore wind is still at a very initial stage in Germany and we are losing speed before we even got started,” RWE’s new chief executive officer, Peter Terium, who took charge on July 1, said in Berlin last week. “My biggest challenge is to take the helm in this difficult environment” where Germany is switching to renewable energy.

The Dutchman and yoga devotee has taken over at Germany’s second-largest utility as the decision to close all the country’s nuclear reactors deprives the company of low-carbon generation, forcing him to invest billions in wind turbines and solar panels. He’ll also try to revive a flagging asset-sales program and negotiate a deal with Russia’s OAO Gazprom on gas supply after rival EON AG settled a similar dispute.

“The connection of the offshore wind farms is a substantial problem,” said Thomas Deser, portfolio manager at Union Investment GmbH responsible for the fund’s 92 million-euro stake in RWE. “RWE could bring forward solar investments and postpone but not abandon investments in wind farms.”

While grid operator TenneT TSO GmbH has told RWE it doesn’t know when it will be able to link up the North Sea East project, the German government this week agreed to a framework for compensating wind farm developers for connection delays. Deputy CEO Rolf Schmitz said on June 27 unless the situation improves the company won’t reach its clean-energy target.

Terium, 48, succeeds Juergen Grossmann, who saw RWE lose about 60 percent of its market value during his five-year tenure as unprofitable gas-import contracts with Gazprom and the reactor shutdown cut earnings.

Investors remain unimpressed by the prospects for RWE, where profit dropped 34 percent last year. Based on the ratio of next year’s earnings before interest, tax, depreciation and amortization to equity and debt, the company is cheaper than all bar one of the members in Europe’s benchmark utilities index.

Terium trained as an auditor in the Netherlands before joining RWE in 2003. He became CEO of the supply and trading business two years later and in 2009 took charge of Dutch utility Essent NV after it was acquired by RWE. In September, he joined RWE’s executive board as deputy CEO.

“A big company like RWE with its bulk is more difficult to move than a small enterprise,” Terium said in an interview in Berlin. “Traditionally, it is not the fate of a utility to handle uncertainty.”

To free up cash for investment, RWE aims to sell 7 billion euros of assets by the end of next year. That may prove difficult because RWE’s planned 3 billion-euro sale of its assets in Egypt is stalled as the country’s turbulent political transition deters potential buyers, people familiar with the situation said last month.

RWE runs three of Germany’s nine nuclear reactors after it had to close two others on Chancellor Angela Merkel’s orders last year. As the remaining reactors are readied for shutdown, RWE will have to decide how to replace the generating capacity.

Building new coal-fired plants isn’t likely because of emissions limits, while less polluting gas-fired generators aren’t financially viable at the moment. That leaves renewables. As Germany shifts from nuclear, it plans to raise the share of renewable power to at least 35 percent by 2020, up from about 20 percent now.

Terium “has to decide how RWE will allocate its future investments of about 5 billion euros a year,” Matthias Heck, an analyst at Macquarie Group Ltd. in Frankfurt, said by phone. “This may become difficult, because generation spreads are currently too low to justify investments in new conventional generation assets.”

Rival EON AG, based in Dusseldorf, is cutting jobs and last month shored up its financial position by selling Open Grid Europe, Germany’s biggest gas distribution system, for 3.2 billion euros. EON this week said it had settled its dispute with Gazprom in a deal that will increase half-year earnings by 1 billion euros.

RWE will invest 5 billion euros in renewables in four years, mainly in sea-based wind farms in Germany and the U.K. Renewable plans also include w on land in Germany, the Netherlands and Poland, as windmills as investments in biomass stations and existing hydropower facilities.

T. Boone Pickens’ Mesa Power LLP canceled plans to build a $10 billion wind farm in the Texas Panhandle region because transmission wasn’t adequate to handle the amount of power they would produce. He cut in half the number of General Electric Co. he’d planned to buy and instead sought to build projects close to transmission lines in Minnesota and Canada.

Terium, RWE’s second Dutch-born CEO after Harry Roels, watched this month’s Germany versus Netherlands soccer match at the company’s headquarters wearing Holland’s traditional orange. To avoid offending his German co-workers he said he can only win when the two countries play each other.

“Terium’s willing to listen to different opinions and I trust he’ll make the right decisions and softly steer the tanker on course,” Union Investment’s Deser said.