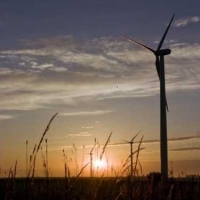 Illinois, United States [RenewableEnergyWorld.com] While harnessing more energy from the wind could help satisfy growing demands for electricity and reduce emissions of global-warming gases, turbulence from proposed wind farms could adversely affect the growth of crops in the surrounding countryside.

Solutions to this, and other problems presented by wind farms — containing huge wind turbines, each standing taller than a 60-story building and having blades more than 300 feet long — can be found blowin’ in the wind, a University of Illinois researcher said last month.

“By identifying better siting criteria, determining the optimum spacing between turbines, and designing more efficient rotors, we can minimize the harmful impacts of large wind farms,” said Somnath Baidya Roy, a professor of atmospheric sciences at the U. of I. “Through careful planning and testing, we can avoid some of the worst pitfalls altogether.”

Wind-power technology has steadily progressed from small to large wind farms that contain vast arrays of giant turbines plugged into existing power-distribution networks. In fact, the American Wind Energy Association (AWEA) expects that once the year has been tallied final numbers will reveal that more than 7,500 megawatts of wind energy capacity was installed in 2008.

A single wind farm in northwest Iowa, for example, has more than 600 wind turbines and provides power to more than 140,000 homes.

But that isn’t enough, said Roy, and his research is focused on how to make larger and larger wind farms more efficient.

“If wind is to be a major player in global electrical production, however, we have to think in terms of even larger scales — of say, thousands of turbines per wind farm,” Baidya Roy said. “Such a wind farm could replace ten coal-fired power plants, but with so many turbines, turbulence could generate huge problems.”

By disrupting airflow to nearby turbines, turbulence can significantly reduce the efficiency of a wind farm. But turbulence produced by turbine rotors also can have a strong impact on local ground temperature and moisture content.

“Turbulence creates stronger mixing of heat and moisture, which causes the land surface to become warmer and drier,” Baidya Roy said. “This change in local hydrometeorological conditions can affect the growth of crops within the wind farm.”

One way to reduce the impact of turbulence is to better integrate the wind-energy generation process into the natural kinetic energy cycle.

The first step in reducing the effects of turbulence on local hydrometeorological conditions is to identify regions around the world where wind energy is high and frictional dissipation also is high, Baidya Roy said. “Building wind farms in regions where there is already a lot of kinetic energy dissipation would help to minimize the intrusion to the natural kinetic energy cycle.”

Although the tops of mountain ranges are regions with high winds and high surface friction, constructing wind farms on summits would be impractical or economically unfeasible. Researchers must therefore search for regions better suited for integration with the kinetic energy cycle.

Using the IRA25 dataset, a comprehensive collection of 25 years of data from surface meteorological stations, radiosondes and satellites, Baidya Roy is mapping the wind’s frictional dissipation around the world. He is able to estimate how much wind is available at selected sites, and how much of the wind’s kinetic energy is dissipated as friction at the surface.

His results show that eastern and central Africa, western Australia, eastern China, southern Argentina and Chile, northern Amazonia, the northeastern United States, and Greenland are ideal locations for siting low-impact wind farms. In these regions, a wind farm with 100 large wind turbines spaced about 1 kilometer apart can produce more than 10 MW of electricity.

In related work, Baidya Roy also is studying ways to reduce the effects of rotor-generated turbulence on nearby wind turbines. As wind passes through a turbine, some of the energy creates a disruption much like that created by a moving boat. This disruption can affect the efficiency of a wind farm.

Using models, Baidya Roy is simulating the effects of different turbine spacing and patterns, and different rotor designs, on turbulence. The simulations show that reducing rotor-generated turbulence not only reduces the hydrometeorological impacts, but also increases power production by harnessing energy that was otherwise lost to turbulence.

“These studies suggest that while large wind farms can affect local hydrometeorology, there are smart engineering solutions that can significantly reduce those impacts.”

James E. Kloeppel is the physical sciences editor at the University of Illinois News Bureau.