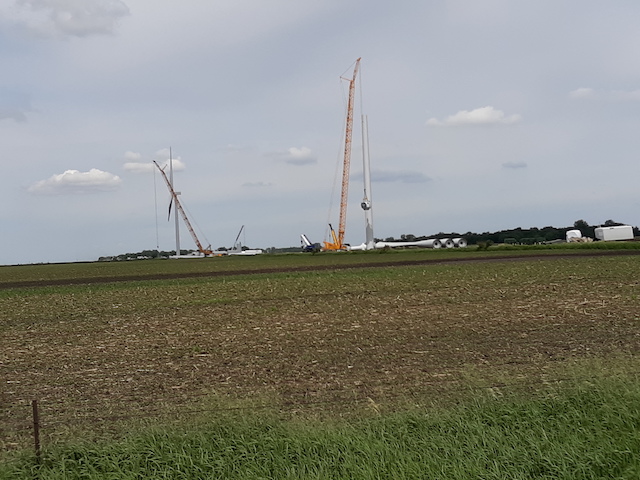 All 60 wind turbine nacelles in the wind farm are to be re-powered.  When the project was originally built, 2.5-MW Clipper Liberty nacelles were used.  The Clipper nacelles were made in Cedar Rapids, Iowa and will be replaced with 2.5-MW GE nacelles made in Pensacola, Florida.   Also required are changing out the hubs and blades.

NextEra Resources Communications Specialist Conlan Kennedy explained in an email why Next Era was re-powering a wind farm that’s only in its 11th year of operation: “Since we built the Endeavor Wind Energy Center in 2008, there have been significant enhancements in turbine technology, including longer blades and updated gearboxes.  Working with our partners at General Electric, we have an opportunity to integrate this new technology into our existing turbines to improve their performance and generate more electricity for customers.

These upgrades will be good for Osceola County because it means we’ll be able to generate renewable energy over an extended period of time.  This also extends the period we’ll generate payments to landowners and tax benefits for the community.”

On the topic of the timeline, he added, “We began upgrading roads in March and construction crews will work through the end of winter.   It takes between 4 to 7 days to upgrade each wind turbine.  For people who live and work near the project, they will see trucks, cranes and equipment, including turbine blades moving in and out of the area.”

Conlan believes that wind power is a great benefit to communities.

The American Wind Energy Association does a good job telling that story, but it’s incumbent on all of us to share it as well, because wind energy has a tremendous potential to drive economic growth in rural communities,” he said.

With many years of expertise behind him as a wind energy technology educator, Daniel Lutat offered his insights into the concept of re-powering wind farms to take advantage of today’s newer and always changing technologies.  Lutat is the Director, Sustainable Energy Resources & Technologies at Iowa Lakes Community College.

Since rolling out the nation’s first Associate of Applied Science Degree in Wind Energy and Turbine Technology in 2004, Iowa Lakes Community College has been a leader in delivering training and education to meet a steadily growing demand for operations and maintenance technicians across the country and abroad.

With a 28-year Air Force aircraft maintenance chief career behind him, Lutat says, “I can relate to how many people refer to the turbine as an “airplane on a stick.”  While that’s not quite accurate, it’s not too far off.  Similar to aircraft, a turbine can be retro-fitted or re-powered for as long as technology continues to improve tower, blade and power plant design.   In fact, many technologies that the aircraft industry perfected are coming into use in wind energy.

Turbines are not “throw-away” items and much of what goes into a turbine can be harvested for other purposes at the end of a turbine’s life cycle—copper, aluminum, recyclable steel, electronic devices and a host of other items that are repurposed.  In the case of Endeavor, the “support tubes” are re-utilized as well, for a significant cost savings.  The process of giving turbines new life is testimonial to the fact that the industry leverages a renewable resource and is a sustainable “bridge technology” to the next best ideas in energy production.”

When Lutat talks about what kinds of classwork that students study in the Iowa Lakes wind energy program, he says, we do include such new concepts as re-powering, since our graduates find work in virtually every sector of the industry, from engineering and project development, to operations and maintenance – and, of course, repowering.  As we become better stewards of our planets systems, understanding what that looks like is important to developing a new kind of energy professional that understand how to achieve it.

And lastly, Lutat argues, “In my opinion, re-powering turbines is the kind of highly visible activity that shows that the industry is continually moving forward in responsible ways.  Producing more energy with improved assets is smart, no matter how you slice it.  That’s a key ingredient in a recipe that’s seen the cost of wind energy compete well with resources like coal and natural gas, and that is testament to human ingenuity.   It also illustrates how the industry values our children’s future.”Current progress as of a week ago showed that Blattner Construction crews were down to less than 20 turbine sites remaining to be repowered.  One crew member said when asked that they are to relocate to a project in Texas upon completion of this project in early September.

Loren Flaugh is a freelance writer who grew up on a small northwest Iowa farm in the 1950s and 1960s. He enlisted in the US Navy Seabees, served in Vietnam in 1968 and then began a 20-year career working in just about every aspect of the petroleum industry. He was employed by Dresser Engineering and Construction Company, a Tulsa, Oklahoma company, for 11 of those years. He was trained as a high voltage power and low voltage control electrician and supervisor on numerous and complex projects in oil refineries, natural gas liquids hydrocarbon fractionation facilities and many major pipeline systems.

In 1988, Flaugh began writing irregularly for the Wichita newspaper and weekly for the El Dorado Times at El Dorado, Kansas. After taking a couple of semesters of community journalism classes at a community college, he began writing much more often. Today he mainly enjoys writing about most any kind of energy matter, though he frequently writes on other topics as well.

The future of energy generation is discussed each year at POWERGEN International. The next event takes place November 19-21, 2019 in New Orleans.

‘There’s a gap’: A cybersecurity expert’s advice for renewable energy