New Hampshire, U.S.A. — The latest report published by the European Wind Energy Association (EWEA) released at its annual offshore wind conference finds there is the potential for exponential growth in offshore installations, with a high concentration in the waters off northwestern Europe.

The report, ‘Wind in our Sails,’ said there is more than 141 gigawatts of offshore wind energy capacity already built, under construction, consented or planned in 17 EU member states. That number would represent 35 times more capacity than the 4 gigawatts currently installed, and it could provide more than 13 percent of Europe’s electricity production.

European countries currently have cornered the offshore market, with 99 percent of installed capacity and 5.6 GW currently under construction in the UK, Germany and Belgium.

There are, however, significant challenges to achieving such rapid growth. The report warns that if the offshore vision is to be fulfilled in Europe, it will need a large financial backing of offshore power grids in the northern and Baltic seas to carry the electricity to consumers. The industry could also face a high-voltage subsea cable shortage in the next few years and a possible shortage of trained workers. 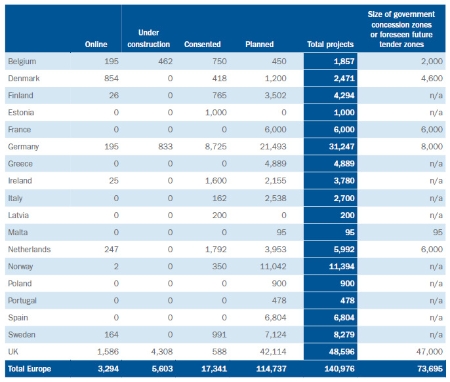