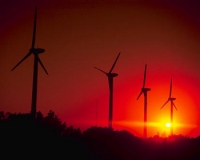 The report shows that U.S. developers brought online a capacity total of 822 megawatts (MW) in the first half of the year. With the strong growth, the U.S.’s cumulative wind power capacity surged to 9,971 MW — within close striking distance of the 10-gigawatt (10,000-MW) milestone. Texas’ cumulative total now stands at 2,370 MW of capacity — enough to power more than 600,000 average American homes — followed by California’s 2,323 MW. Texas edged ahead of California by adding a total of 375 MW, about half of the total amount installed in the country since the beginning of the year. While Texas overtaking California in overall capacity is the big news in the U.S., trends in the European market show significant shifts in wind plant ownership and wind turbine supply, according to a new study by Emerging Energy Research (EER), a research and advisory company based in Barcelona, Spain, and Cambridge, Massachusetts. The firm predicts the European wind power markets will grow at a measured pace over the next six years. Spain will remain as Europe’s main growth engine over the next five years according to the new EER study, while significant new growth is expected from other Southern European markets (Italy, Portugal, France), select Northern European markets (UK, Sweden) and emerging Eastern Europe. Overall wind power capacity in Europe is expected to more than double, from 40,605 MW in 2005 to 83,061 MW by 2011 increasingly led by independent power producers (IPP) and utilities. “2005 was a big year for institutional investors, which began looking to assemble significant project portfolios,” said EER Research Director Keith Hays. “These firms are buying equity in wind developers, as well as providing funding for project pipelines and individual projects.” While intensifying competition and gigawatt size pipelines suggest an unstoppable boom, soaring global demand is putting a strain on European wind turbine supply. A seller’s market for turbines has emerged in Europe, constraining growth in some cases, according to EER’s study. In the global context, Europe will remain the major regional market for the near term, installing at least a third of global capacity through 2011 at over 6 GW yearly. Growth is shifting away from Germany and Spain, according to EER’s study. In other West European markets the UK will add 4,700 MW of new wind power capacity in the next six years. In this same period, Italy is expected to add 3,900 MW, and France and Portugal, 3000 MW. Eastern Europe, boasted by Hungary, Poland, and the Czech Republic, is expected to grow its wind power capacity ten fold by 2011.