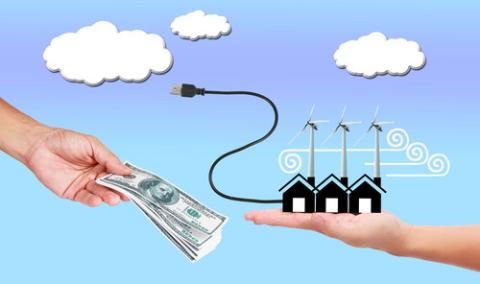 London — Wind farms and solar parks are changing hands at record rates, signaling both an increased taste for the assets among pension funds and hard times for utilities that are the biggest sellers.

About 43 percent of the 275 deals completed in the power industry in the first nine months were for renewable generators, up from 37 percent in the year-earlier period, according to data compiled by Ernst & Young LLP. The value of all the deals increased to $104 billion from $93 billion.

Buyers from insurer Aviva Plc to Danish fund PFA Pension A/S are seeking yields averaging about 6 percent on wind and solar, according to data compiled by Bloomberg. Utilities such as France’s GDF Suez SA, Iberdrola SA of Spain and Dong Energy AS have unloaded plants to build cash cushions as power prices slumped and competition increased from independent generators.

Utilities “simply don’t have the capital to allocate to endless volumes of renewable energy investment,” said Ben Warren, who works in environmental finance at Ernst & Young, which is rebranding itself as EY. Assets are trading hands at “record rates” and sales will continue, he said.

That also helps explain why investment in renewables is declining. After touching a record $317.2 billion in 2011, inflows of money into wind, solar, biofuel and energy-efficiency projects fell 11 percent last year and are on track to drop again in 2013, Bloomberg New Energy Finance estimates.

Many power companies were under pressure to sell, and some of the assets may be riskier propositions in the future: Subsidies for renewables are being scaled back across Europe and the U.S., led by retroactive reductions for existing projects in Spain, Greece, Romania and the Czech Republic. Utilities with nuclear capacity such as RWE AG and EON also are having an even harder time trying to boost profits as Germany and France wind down atomic energy programs.

Utilities in Europe accounted for about 10 percent of global investment in wind and solar farms in the past five years. Most of them “are trying to rebuild their balance sheets and improve their credit ratings,” Warren said.

They may eventually recycle cash asset sales into new renewable-power projects, especially offshore wind plants still on the drawing boards that will require hundreds of millions of dollars.

For pension funds, the returns on renewable energy plants beat those for many government bonds and are backed by contracts to sell power at above-market prices. Ten-year government securities in the U.S. and U.K. are yielding about 2.6 percent.

Pension funds and insurance companies including Aviva, AMP Ltd., and Hermes GPE are seizing the opportunity to tap assets that earn steady returns for decades that formerly would have been monopolized by the utilities.

AMP Capital Investors Ltd., a New South Wales-based institution that specializes in real estate and infrastructure investments, has bought 104 megawatts of wind farms in the U.K. and Ireland and is looking to buy more assets, said Bob Pehari, who is head of infrastructure in Europe for the unit of Australia’s largest fund.

“Renewable energy can provide you at an operational stage with a reasonably good cash yield,” Pehari said. “We’re talking about long-term concessions that will go out to 2030 plus, and that is also helpful for pension fund clients.”

AMP said it’s seeing “a lot” of deal flow from large utilities and it’s looking at several large renewable energy assets across Europe. Hermes too is seeing several “good opportunities,” according to Hamish de Run, an infrastructure partner at the private equity firm. It will continue to invest in the industry, which is an area it is “keenly focused on.”

Aviva recognized the utilities want to sell and decided it could find good value in the assets, said Ian Berry, an infrastructure fund manager at the London-based insurer. A spokesman at Denmark’s PFA Pension didn’t return calls seeking comment.

The situation isn’t necessarily bad for renewables since pension fund cash is taking the place of utility balance sheets, Warren of EY said.

“We have a lower cost of capital and a longer term expectation on those cash flows than a utility may have,” said de Run at Hermes. It has invested in onshore wind and rooftop solar in the U.K. and it may invest in biomass over the next 12 months.

Dong is selling stakes of as much as 50 percent in offshore wind projects. Partnerships release capital for new projects, wind-power unit Senior Vice President Lars Thaaning Pedersen said. They give investors “assets with attractive revenue characteristics, with long-term income streams and long- term exposure to underlying fundamentals such as oil and gas prices as well as inflation,” he said by e-mail.

GDF Suez, hurt by lower demand for gas-fired power in Europe, is cutting capacity in the region to contain costs and expanding into fast-growing economies in Asia, Latin America and the Middle East. The French utility has also sold stakes in energy assets in countries including Portugal and Australia to lower debt. GDF Suez spokesman Paul-Alexis Bouquet declined to comment for this article.

RWE AG said in March it will cut renewable-energy investment by half from next year to reduce debt. Iberdrola plans to sell 2 billion euros of assets by the end of 2014. Dong in June sold its onshore wind business to PFA Pension and energy company SE.

Iberdrola has sold 1.1 billion euros of “non-core” assets since the start of 2012, including operating wind farms in France, Germany and Poland.

For Iberdrola, the sales are in line with plans to divest assets in “non-strategic markets” and to strengthen its balance sheet, a spokesman for the company said. He blamed falling demand, new regulatory measures and higher taxes on weakening the company’s finances.