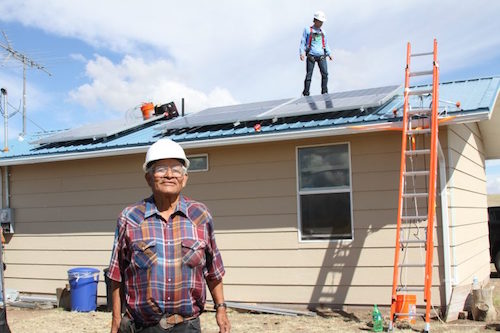 Just over a year ago, California’s SB 350 became law and was rightly celebrated for its boldness and impact, increasing the state’s renewable energy mix to 50 percent and doubling energy efficiency buildings. Today, a less heralded provision of SB 350 – charging the California Energy Commission with studying barriers to clean energy – pushes us toward exceeding our renewables and efficiency aspirations. Moreover, it recognizes that in order for the state to realize its climate and energy future, planning must include and reflect the needs of all Californians.

Through the SB 350 Barriers Study, the commission has engaged consumers, businesses, local leaders, environmental groups, and others to identify strategies that can unlock clean energy investments and spur growth in low-income and disadvantaged communities across the state.

The final version of the study and recommendations are scheduled for release later this month, just in time for lawmakers to noodle on the robust and far-ranging ideas before the 2017 legislative session. In addition, the commission – in conjunction with the California Air Resources Board – will issue a companion report about barriers to clean transportation. The study and its companion report are the kinds of tools that are critical for California to reach its clean energy goals.

Despite having the world’s sixth largest economy California struggles with poverty. Almost 17 percent of the population falls under the federal poverty line, which is accentuated by the state’s diverse geography. In cities like Fresno and throughout much of the Central Valley, poverty rates over 20 percent are compounded by some of the worst pollution burdens in the country.

With household costs rising for all Californians, the benefits of scalable and efficient interventions to keep energy bills manageable are critical.

A recent report by American Council for Energy Efficiency found low-income households in California spend more of their paycheck on energy than their middle and high income neighbors, ranging between 62 and 65 percent more in major cities like Los Angeles and Sacramento. At the same time, the wealth of innovation and job-creating potential in the state’s clean energy economy, an economy with a long track record of clean energy policies and programs, give California a strong foundation for accelerating investment in disadvantaged communities.

Overall, the set of 11 draft recommendations the California Energy Commission released late last month represent a sound foundation for action. The list includes a number of ideas Environmental Defense Fund (EDF) encouraged in initial comments on which barriers to add and what solutions deserve greater and urgent policy consideration. The study itself is a comprehensive inventory of current low-income programs. What’s more, it’s a discussion of the structural, financial, and policy barriers that currently stand between California households and energy efficiency and renewable energy.

In particular, EDF was pleased to see the commission highlight the broad and scalable impact of the following solutions:

Where to Go From Here

In addition to the final report and recommendations expected later this month, the solutions will be even more impactful if the California Energy Commission prioritizes them according to commission’s criteria of scalability, sustainability, and accessibility.

Additionally, the commission should measure the potential climate change causing greenhouse gas impacts of the solutions to further elevate their benefit. The study has generated much attention among California clean energy, environmental justice, and community development organizations, among others. We hope the commission embraces the specific and detailed comments of these groups that are often on the ground implementing and delivering services alongside government entities.

In SB 350, legislators recognized ignoring the challenges low-income communities face undermines the boldness of California’s climate and clean energy goals. The Barriers Study is the type of assessment and inventory California needs. The California Energy Commission has given legislators and stakeholders a great start for the next suite of clean energy policy solutions that will set us on the pathway for a clean energy future for all.

This article was was originally published by the Environmental Defense Fund and was republished with permission.