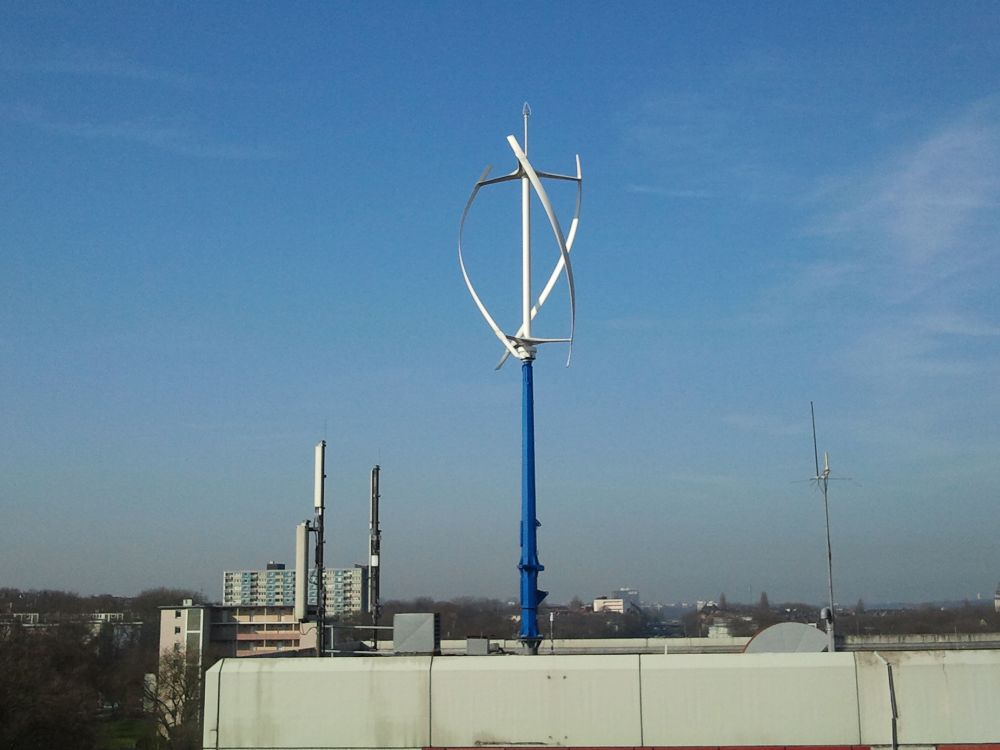 The Rheinischen Post reported that the installation of a small Vertical-Axis Wind Turbine (VAWT) was a total flop and removed.

The Quiet Revolution 5 VAWT was installed in 2012 and in the 3.5 years the turbine was in “operation” the school encountered many problems with the Darrieus turbine. This from a summary by Patrick Jüttemann on the German web portal for small wind turbines titled Vertikale Windkraftanlage wird wieder abgebaut – Aus Fehlern lernen.

The turbine was installed atop a school in Rommerskirchen, a village northwest from Cologne. The original article in the Post said that most of the time the turbine, what it called a “mixer” for its similarity to an eggbeater, stood still and didn’t produce any electricity.

Jüttemann suggests that the failure of the project was due to poor project planning and could provide lessons that others could learn from.

Indeed that’s true, but how many lessons of poor project planning do we need before we learn anything new? We knew beforehand that the QR 5 was unlikely to perform well even when sited to best advantage. We knew that putting the turbine on top of a school in the middle of city was a very poor idea. We knew that without competent management and service the project would fail. We knew that RWE, the regional utility that installed the turbine, had invested in Quit Revolution—in Great Britain—when the company overtly opposed wind energy in its own country. We knew that RWE was greenwashing. We knew that an investment by a utility like RWE in a wind company was the kiss of death. And indeed it was. The company has been defunct for several years now. How many times do we have to do this before we learn these very basic lessons?

What we can learn from this is that we don’t need any more “experiments.” We’ve been there, done that—two or more decades ago. That contemporary marketers (hustlers?), engineers, and small wind advocates should examine their motives and their understanding of the history of wind energy and why we put wind turbines where we put them.

We should be especially leery when a utility comes to our community and says “We’re here to help you develop renewable energy.”

That this turbine was doomed to fail—and would give small wind another—and unneeded—black eye was obvious from the beginning—for anyone who had the desire to know.

More on why VAWTs have been tried—again and again—and failed every time can be found in Chapter 6 of Wind Energy for the Rest of Us.

This article was originally published by Paul Gipe and was republished with permission.