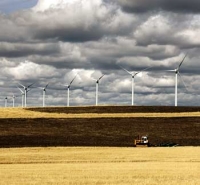 Bellevue, Washington [RenewableEnergyAccess.com] Capable of generating up to 150 MW of electricity, Puget Sound Energy’s (PSE) Hopkins Ridge Wind Project, located about 285 miles southeast of Seattle, is now producing renewable energy for the utility’s 1 million-plus electric customers. The completion of the $200 million power-generating facility last month signals PSE as the only Northwestern U.S. utility to solely own and operate a large wind farm. Plus, PSE expects a second wind farm to become operational in late 2006.

Spread across 11,000 acres of mostly privately owned range and farmland, the Hopkins Ridge Wind Project has 83 massive wind turbine towers, according to the release, that measure 335 feet from the ground to the vertical tip of their 262-foot-diameter, three-blade rotors. When all 83 turbines are running at peak capacity, they can generate 150 MW of electricity — enough energy on an average basis to supply about 50,000 homes. In one day last month, the Columbia County wind farm clocked an average 111 MW of power generation over a 24-hour period for PSE customers. Each Hopkins Ridge turbine has a generator and gearbox housed inside a 77-ton nacelle fixed atop a 220-foot-tall tower. The project’s power output travels through 93 miles of underground cable to a substation, and then moves over a high-voltage Bonneville Power Administration line to PSE’s power grid. The utility built 18 miles of roads to service the towers, and expects to employ 18 workers. “This is a milestone for our customers and for our company,” said Steve Reynolds, PSE’s chairman, president, and CEO. “Hopkins Ridge marks the beginning of a new era for us, with a clean, cost-effective source of renewable power taking a prominent place in our mix of electricity supply. It’s now on to Kittitas County for our construction team, where we’re building our second wind facility, the Wild Horse Wind Project,” Reynolds said. Wild Horse will be an even larger facility, with 127 wind turbines capable of generating up to 230 MW of power. The project will be built on the slopes of Whisky Dick Mountain, about 125 miles east of Seattle between Ellensburg and the Columbia River. PSE’s goal is to serve up to 10 percent of its customers’ total electricity needs by 2013 from renewable resources. Once the utility’s second wind project becomes operational, about 5 percent of PSE’s power supply will be renewable.