New Hampshire, USA — Ahead of next week’s AWEA Windpower event in Chicago, a Webinar from the Department of Energy (DoE) provided an update on the potential for offshore wind energy in the U.S. with a state-by-state progress report, as well as seven DoE-backed demonstration projects preparing to explore various types of technologies to simplify the costs and efficiency of offshore-generated wind energy.

Out of a calculated 4,150 GW of offshore wind energy resource potential, the DoE’s Wind Powering America initiative aims to achieve 54 GW by 2030, translating to roughly 10,000 offshore turbines averaging at east 5 MW each, and roughly 4 percent of the nation’s electricity capacity, explained Greg Matzat, senior advisor for the DOE’s offshore wind office of wind and water power technologies. That could also support several hundred thousand jobs in the supply chain and revitalize ports and heavy industries, he added.

While the wind resources in the middle of the U.S. have attracted initial wind technology investments, offshore wind energy is much closer to where the major electric load centers are — 28 coastal states use more than 79 percent of the nation’s electricity, he said, and typically have more expensive rates — and avoids extra burden and investments in the transmission grid getting the electricity where it’s needed most, Matzat pointed out. Offshore wind also tends to be more load-following than land-based wind, picking up in the afternoon to better offset electricity market prices during peak period. Offshore wind turbines also typically see higher capacity factors with percentages in the 40s instead of the 30s. (Statoil’s Hywind demo project in Norway has achieved 50 percent capacity factor, he noted.) 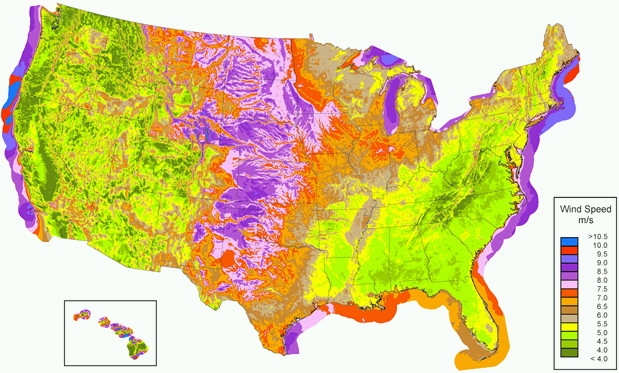 There are also unique legislative and regulatory hurdles for offshore wind development. Federal jurisdiction is triggered beyond three miles off the Atlantic and Pacific coasts, where laws recognizing states’ “submerged” lands transfer to the watch of the DOI/BOEM. (In the Great Lakes there are no federal leases; in the Gulf of Mexico the line is widened to nine miles offshore.) Jim Lanard, president of the Offshore Wind Development Coalition, highlighted the U.S. Coast Guard’s oversight of development in coastal port access routes and shipping lanes, some of which go through wind energy areas identified and adopted by the Department of the Interior (DOI). A productive working relationship between the wind energy industry, individual states, and the USCG is critical, “or US offshore wind areas will go away,” he proclaimed. Accommodations for port access routes around offshore wind projects might be necessary in some cases, but there aren’t any significant traffic route claims where these development projects are now; lessons can be learned from Europe’s highly-trafficked routes.

Offshore wind is progressing across several Eastern states. Two projects in New England begin construction later this year: Massachusetts’ 420-MW Cape Wind and Rhode Island’s 30-MW Deepwater Wind. In the Mid-Atlantic, Delaware has issued a lease to NRG though without an offtake mechanism; New Jersey sees revenue stream potential for 1100 MW; Maryland has a brand-new bill for 200 MW of offshore wind renewable energy certificates, splitting wind energy areas so developers compete for bids; Virginia’s leasing process is underway. Several states (Virginia, North and South Carolina, Georgia) have support for R&D and site identification but are not deregulated electric markets, so developers could end up bidding against vertically-integrated utilities. Offshore wind work also has progressed rapidly on the Pacific Coast despite the challenge of much deeper waters, where floating foundations already used in Europe will make inroads.

Looking further ahead, the Department of Energy (DoE) is funding seven offshore wind demonstration projects amounting to 12-30 GW of grid-connected electricity, with a total potential generation cap of 36-82 MW. These projects are being pursued on both Atlantic and Pacific coasts, the Gulf of Mexico and the Great Lakes; each are receiving $4 million over the next year to complete initial engineering, design, and permitting. There’s a required 20 percent cost-share for the first year, but typically the project participants are kicking in more (in some cases much more). The field will be narrowed to three projects in February 2014, which will continue to the next phase of completed design and permits, installed offshore, and achieving operations between 2015-17. Up to $47 million in DoE funding is in play over the following four years, pending congressional appropriations; total funding levels could reach $180 million.

Seven years ago when Lanard started in the offshore wind industry, the talk was about ~3-MW turbines, but now the industry has widened to 6-MW turbines with even larger ones on the horizon, “before putting anything in the water,” he noted. Meanwhile the industry has already driven down costs and improved efficiencies, from wind speed measurements to foundations. Floating foundations used to be dubbed “Generation Three” technologies; “now we’re calling them Generation 1.1,” he said. These seven projects are leading the way “to make this a very competitive industry — even before we have a carbon tax,” he added.

Answering an audience member’s question, Matzat emphasized the enthusiasm building among stakeholders, rather than opposition. Beyond stakeholder involvement, people in general “have to see them in the water, how positive they are, what they look like,” he said — showing that they’re “not something ugly on the waterfront” will make it easier for future large projects.