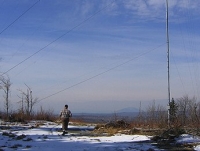 Peterborough, New Hampshire [RenewableEnergyAccess.com] For wind developers, the Production Tax Credit (PTC) can either make or break a project. In Lempster, New Hampshire, the timely development of a 24-megawatt (MW) wind farm hinges on the probability of it coming online before December 31, 2007, when the PTC expires.

Because a comprehensive review of the project was approved by the New Hampshire site evaluation committee, it could take Community Energy Inc. — the developer overseeing the Lempster wind farm — up to nine months to start construction. And if the PTC is not renewed before the expiration date, there’s a chance the project could stall for much longer. The PTC is a federal tax credit created in 1992 to encourage large-scale wind production. The current credit is for 1.9 cents per kilowatt-hour (kWh) of energy produced. To the chagrin of wind developers, Congress has only renewed the tax credit for short periods of time, which has caused a “boom and bust cycle” in the industry. Missing the PTC deadline doesn’t necessarily stop a project — but it can certainly cause complications. Economic impacts on the industry can be severe if projects are not able to meet the deadline. Therefore, long-term extension of the PTC is the biggest priority for the wind industry. “The big question is if a project will be able to come online before the PTC deadline,” said Christine Real de Azua, Assistant Director of Communications at the American Wind Energy Association (AWEA). “If it cannot, then the project will most likely be delayed, which can have employment repercussions down the production chain.” For example, take the many Midwest wind projects suspended because of the ongoing Federal Aviation Administration (FAA) study on how wind turbines affect military radar. Hundreds of millions of dollars and thousands of jobs are on hold because of the study. And if development of certain projects is stopped for too much longer, it could be years before they are ever finished. At least six projects have been given the green light by the FAA in Minnesota, Wisconsin and South Dakota in the last few weeks. Now those wind farms — which amount to more than a thousand megawatts of power — will be able to come online before the PTC expiration date, building local tax revenue, creating jobs and adding clean energy to the nation’s energy infrastructure. However, development of the wind farm in Lempster is going to be tight. After the four- to nine-month site-review process, Community Energy will have to move fast to finish the project before the end of 2007. “The timing is going to be tense. If something gets messed up or we don’t get our permits in time, then we will have a problem,” said Jeff Keeler, Project Manager for Community Energy. “But there is no chance we will scrap the project. Everyone is hopeful that the PTC will be extended, and we are definitely planning on moving forward.” At this point, that’s all that wind developers can do. Meanwhile in Washington, DC, industry representatives are lobbying hard to get a long-term PTC extension passed before the end of 2007. “You can bet we’ll be working on it,” said Real de Azua. “This is a huge priority for us.”